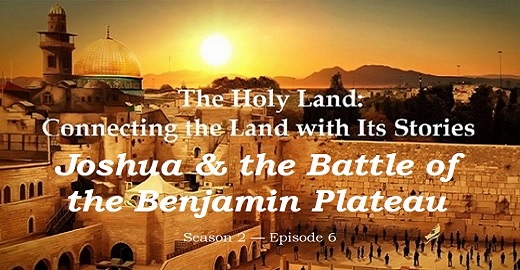 Jericho is located on the eastern edge of Israel in the Jordan Valley. It's where the Israelites entered the Promised Land for the first time after centuries in Egypt and 40 years wandering in the desert. Amir Tsarfati, former Deputy Governor of Jericho during the Palestinian/Israeli peace talks, is an expert military strategist with a deep knowledge of this region. He joins Jack to help tell the whole story of how God gave His people control over the Promised Land despite Joshua being tricked by the Gibeonites and not following God's orders. The pair begin in the desert oasis of Jericho and then head through the treacherous terrain of the Judean Wilderness to the Benjamin Plateau, providing a full understanding of the ruggedness of the land, the danger of the battle, and the victory of the Lord.

In Episode 6, Jack Beck takes us to this important region that was, and still is, a crossroads for Israel. We'll get the story behind the story of this important location where the Israelites entered the Promised Land and we’ll answer some questions: Why does the Benjamin Plateau play such an important role for Israel in history and modern day? How did God miraculously deliver His people once again despite military mistakes?

If you're at an intersection in life, you'll see through this epic physical battle that God is fighting for you. Jack summarizes his thoughts on the experience: "I see that God is in control, and that brings me encouragement knowing that when I find myself at the crossroads of a difficult journey,  when I make mistakes, my story doesn't end there."

Email ThisBlogThis!Share to TwitterShare to FacebookShare to Pinterest
Labels: Our Daily Bread, The Holy Land, Travel the World from Home, Video