The Twelve Days of Christmas — The Eleventh Day

The Twelve Days of Christmas
The Eleventh Day

The Eleventh Day of Christmas 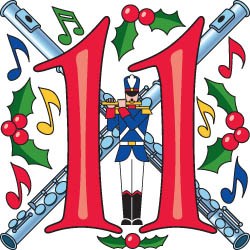 The carol says On The Eleventh Day of Christmas, My True Love Gave To Me...

The Eleven Faithful Apostles. As we know there were 12 Apostles, or known as Disciples. One of them betrayed Jesus. That was Judas, he was the unfaithful one.