The Daily Lectionary for Thursday, January 19, 2023 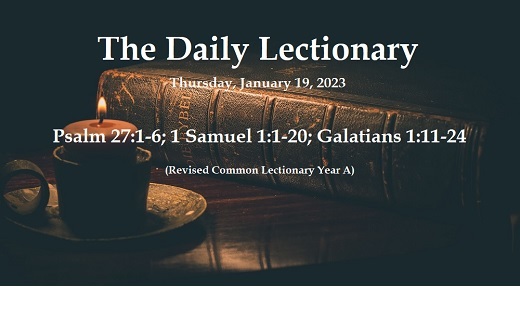 When evildoers came upon me to eat up my flesh,
it was they, my foes and my adversaries, who stumbled and fell.

Though an army should encamp against me,
yet my heart shall not be afraid;

And though war should rise up against me,
yet will I put my trust in him.

One thing have I asked of the LORD; one thing I seek;
that I may dwell in the house of the LORD all the days of my life;

To behold the fair beauty of the LORD
and to seek him in his temple.

Heavenly Father, please give us the confidence we need and seek in You. Please show us the way of life; shine Your light upon us and before us; guide us as we seek to faithfully follow You. We do seek to live in Your presence both now and forevermore. We see Your beauty all around us, and long to worship You in the beauty of holiness, even as we pray in Jesus’ name:

1 Samuel 1:1-20
The birth of Samuel
1:1 There was a certain man from Ramathaim, a Zuphite from the hill country of Ephraim, whose name was Elkanah son of Jeroham, the son of Elihu, the son of Tohu, the son of Zuph, an Ephraimite. 2 He had two wives; one was called Hannah and the other Peninnah. Peninnah had children, but Hannah had none.

3 Year after year this man went up from his town to worship and sacrifice to the Lord Almighty at Shiloh, where Hophni and Phinehas, the two sons of Eli, were priests of the Lord. 4 Whenever the day came for Elkanah to sacrifice, he would give portions of the meat to his wife Peninnah and to all her sons and daughters. 5 But to Hannah he gave a double portion because he loved her, and the Lord had closed her womb. 6 Because the Lord had closed Hannah’s womb, her rival kept provoking her in order to irritate her. 7 This went on year after year. Whenever Hannah went up to the house of the Lord, her rival provoked her till she wept and would not eat. 8 Her husband Elkanah would say to her, “Hannah, why are you weeping? Why don’t you eat? Why are you downhearted? Don’t I mean more to you than ten sons?”

9 Once when they had finished eating and drinking in Shiloh, Hannah stood up. Now Eli the priest was sitting on his chair by the doorpost of the Lord’s house. 10 In her deep anguish Hannah prayed to the Lord, weeping bitterly. 11 And she made a vow, saying, “Lord Almighty, if you will only look on your servant’s misery and remember me, and not forget your servant but give her a son, then I will give him to the Lord for all the days of his life, and no razor will ever be used on his head.”

12 As she kept on praying to the Lord, Eli observed her mouth. 13 Hannah was praying in her heart, and her lips were moving but her voice was not heard. Eli thought she was drunk 14 and said to her, “How long are you going to stay drunk? Put away your wine.”

15 “Not so, my lord,” Hannah replied, “I am a woman who is deeply troubled. I have not been drinking wine or beer; I was pouring out my soul to the Lord. 16 Do not take your servant for a wicked woman; I have been praying here out of my great anguish and grief.”

17 Eli answered, “Go in peace, and may the God of Israel grant you what you have asked of him.”

18 She said, “May your servant find favor in your eyes.” Then she went her way and ate something, and her face was no longer downcast.

19 Early the next morning they arose and worshiped before the Lord and then went back to their home at Ramah. Elkanah made love to his wife Hannah, and the Lord remembered her. 20 So in the course of time Hannah became pregnant and gave birth to a son. She named him Samuel, saying, “Because I asked the Lord for him.”

Galatians 1:11-24
The divine origin of Paul’s gospel
1:11 I want you to know, brothers and sisters, that the gospel I preached is not of human origin. 12 I did not receive it from any man, nor was I taught it; rather, I received it by revelation from Jesus Christ.

13 For you have heard of my previous way of life in Judaism, how intensely I persecuted the church of God and tried to destroy it. 14 I was advancing in Judaism beyond many of my own age among my people and was extremely zealous for the traditions of my fathers. 15 But when God, who set me apart from my mother’s womb and called me by his grace, was pleased 16 to reveal his Son in me so that I might preach him among the Gentiles, my immediate response was not to consult any human being. 17 I did not go up to Jerusalem to see those who were apostles before I was, but I went into Arabia. Later I returned to Damascus.

18 Then after three years, I went up to Jerusalem to get acquainted with Cephas and stayed with him fifteen days. 19 I saw none of the other apostles—only James, the Lord’s brother. 20 I assure you before God that what I am writing you is no lie.

21 Then I went to Syria and Cilicia. 22 I was personally unknown to the churches of Judea that are in Christ. 23 They only heard the report: “The man who formerly persecuted us is now preaching the faith he once tried to destroy.” 24 And they praised God because of me.

The Bible texts of the Old Testament, Epistle, and Gospel lessons are from The Holy Bible, New International Version®, NIV® Copyright ©1973, 1978, 1984, 2011 by Biblica, Inc.® Used by permission. All rights reserved worldwide. Responsive Readings from the Common Book of Prayer (1789).

The Daily Lectionary is a three year cyclical lectionary. We are currently in Year A. Beginning with the first Sunday of Advent in 2023, we will be in Year B. The year which ended at Advent 2022 was Year A. These readings complement the Sunday and festival readings: Thursday through Saturday readings help prepare the reader for the Sunday ahead; Monday through Wednesday readings help the reader reflect and digest on what they heard in worship. Revised Common Lectionary Daily Readings, copyright © 2005 Consultation on Common Texts. www.commontexts.org
The Daily Lectionary for Thursday, January 19, 2023
Psalm 40:6-17; Isaiah 48:12-21; Matthew 9:14-17
Posted by Kenny at 2:10:00 AM