The Daily Lectionary for Saturday, January 21, 2023 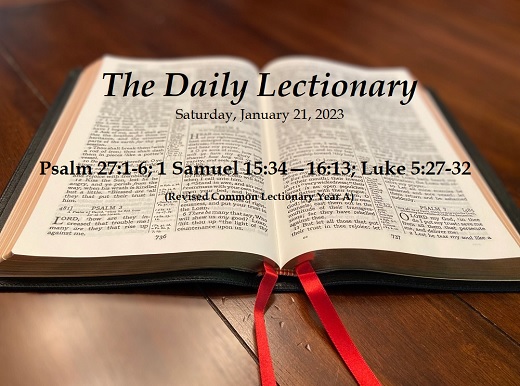 When evildoers came upon me to eat up my flesh,
it was they, my foes and my adversaries, who stumbled and fell.

Though an army should encamp against me,
yet my heart shall not be afraid;

And though war should rise up against me,
yet will I put my trust in him.

One thing have I asked of the LORD; one thing I seek;
that I may dwell in the house of the LORD all the days of my life;

To behold the fair beauty of the LORD
and to seek him in his temple.

Heavenly Father, please give us the confidence we need and seek in You. Please show us the way of life; shine Your light upon us and before us; guide us as we seek to faithfully follow You. We do seek to live in Your presence both now and forevermore. We see Your beauty all around us, and long to worship You in the beauty of holiness, even as we pray in Jesus’ name:

1 Samuel 15:34—16:13
David anointed as king to replace King Saul
15:34 Then Samuel left for Ramah, but Saul went up to his home in Gibeah of Saul. 35 Until the day Samuel died, he did not go to see Saul again, though Samuel mourned for him. And the Lord regretted that he had made Saul king over Israel.

16:1 The Lord said to Samuel, “How long will you mourn for Saul, since I have rejected him as king over Israel? Fill your horn with oil and be on your way; I am sending you to Jesse of Bethlehem. I have chosen one of his sons to be king.”

The Lord said, “Take a heifer with you and say, ‘I have come to sacrifice to the Lord.’ 3 Invite Jesse to the sacrifice, and I will show you what to do. You are to anoint for me the one I indicate.”

4 Samuel did what the Lord said. When he arrived at Bethlehem, the elders of the town trembled when they met him. They asked, “Do you come in peace?”

5 Samuel replied, “Yes, in peace; I have come to sacrifice to the Lord. Consecrate yourselves and come to the sacrifice with me.” Then he consecrated Jesse and his sons and invited them to the sacrifice.

6 When they arrived, Samuel saw Eliab and thought, “Surely the Lord’s anointed stands here before the Lord.”

“There is still the youngest,” Jesse answered. “He is tending the sheep.”

Samuel said, “Send for him; we will not sit down until he arrives.”

12 So he sent for him and had him brought in. He was glowing with health and had a fine appearance and handsome features.

Then the Lord said, “Rise and anoint him; this is the one.”

13 So Samuel took the horn of oil and anointed him in the presence of his brothers, and from that day on the Spirit of the Lord came powerfully upon David. Samuel then went to Ramah.

Luke 5:27-32
The call of Levi
5:27 After this, Jesus went out and saw a tax collector by the name of Levi sitting at his tax booth. “Follow me,” Jesus said to him, 28 and Levi got up, left everything and followed him.

29 Then Levi held a great banquet for Jesus at his house, and a large crowd of tax collectors and others were eating with them. 30 But the Pharisees and the teachers of the law who belonged to their sect complained to his disciples, “Why do you eat and drink with tax collectors and sinners?”

31 Jesus answered them, “It is not the healthy who need a doctor, but the sick. 32 I have not come to call the righteous, but sinners to repentance.”

The Bible texts of the Old Testament, Epistle, and Gospel lessons are from The Holy Bible, New International Version®, NIV® Copyright ©1973, 1978, 1984, 2011 by Biblica, Inc.® Used by permission. All rights reserved worldwide. Responsive Readings from the Common Book of Prayer (1789).

The Daily Lectionary is a three year cyclical lectionary. We are currently in Year A. Beginning with the first Sunday of Advent in 2023, we will be in Year B. The year which ended at Advent 2022 was Year A. These readings complement the Sunday and festival readings: Thursday through Saturday readings help prepare the reader for the Sunday ahead; Monday through Wednesday readings help the reader reflect and digest on what they heard in worship. Revised Common Lectionary Daily Readings, copyright © 2005 Consultation on Common Texts. www.commontexts.org
The Daily Lectionary for Saturday, January 21, 2023
Psalm 27:1-6; 1 Samuel 15:34—16:13; Luke 5:27-32
Posted by Kenny at 2:10:00 AM