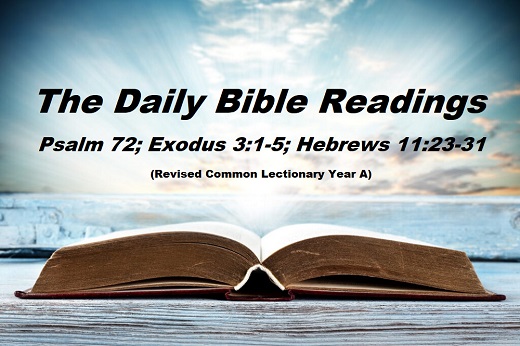 The Daily Bible Readings
Wednesday, January 4, 2023
Psalm 72; Exodus 3:1-5; Hebrews 11:23-31
(Revised Common Lectionary Year A)
A Psalm and A Prayer
Responsive Readings from the Psalms and Prayers
for Public Worship and Private Devotions

Psalm 72
Deus, judicium
Leader: Give the King your justice, O God,
People: and your righteousness to the King’s son;

Leader: That he may rule your people righteously
People: and the poor with justice.

Leader: That the mountains may bring prosperity to the people,
People: and the little hills bring righteousness.

Leader: He shall defend the needy among the people;
People: he shall rescue the poor and crush the oppressor.

Leader: He shall live as long as the sun and moon endure,
People: from one generation to another.

Leader: He shall come down like rain upon the mown field,
People: like showers that water the earth.

Leader: In his time shall the righteous flourish;
People: there shall be abundance of peace till the moon shall be no more.

Leader: He shall rule from sea to sea,
People: and from the River to the ends of the earth.

Leader: His foes shall bow down before him,
People: and his enemies lick the dust.

Leader: The kings of Tarshish and of the isles shall pay tribute,
People: and the kings of Arabia and Saba offer gifts.

Leader: All kings shall bow down before him,
People: and all the nations do him service.

Leader: For he shall deliver the poor who cries out in distress,
People: and the oppressed who has no helper.

Leader: He shall have pity on the lowly and poor;
People: he shall preserve the lives of the needy.

Leader: He shall redeem their lives from oppression and violence,
People: and dear shall their blood be in his sight.

Leader: Long may he live! and may there be given to him gold from Arabia;
People: may prayer be made for him always, and may they bless him all the day long.

Leader: May there be abundance of grain on the earth, growing thick even on the hilltops;
People: may its fruit flourish like Lebanon, and its grain like grass upon the earth.

Leader: May his Name remain for ever and be established as long as the sun endures;
People: may all the nations bless themselves in him and call him blessed.

Leader: Blessed be the Lord GOD, the God of Israel,
People: who alone does wondrous deeds!

Leader: And blessed be his glorious Name for ever!
People: and may all the earth be filled with his glory. Amen. Amen.

Heavenly Father, we praise You for the many blessings You bestow upon us. We honor You for the faithfulness You show to Your children from generation to generation. We pray that You will cleanse us from all unrighteousness so we can live and work with pure hearts. Fill us with Your Holy Spirit, so we can tell others of Your saving grace and mighty works, even as we pray in the name of our Lord and Savior, Jesus Christ:

Exodus 3:1-5
(The burning bush)
3:1 Now Moses was tending the flock of Jethro his father-in-law, the priest of Midian, and he led the flock to the far side of the wilderness and came to Horeb, the mountain of God. 2 There the angel of the Lord appeared to him in flames of fire from within a bush. Moses saw that though the bush was on fire it did not burn up. 3 So Moses thought, “I will go over and see this strange sight—why the bush does not burn up.”

4 When the Lord saw that he had gone over to look, God called to him from within the bush, “Moses! Moses!”

5 “Do not come any closer,” God said. “Take off your sandals, for the place where you are standing is holy ground.”

Hebrews 11:23-31
(Moses acts on faith)
11:23 By faith Moses’ parents hid him for three months after he was born, because they saw he was no ordinary child, and they were not afraid of the king’s edict.

24 By faith Moses, when he had grown up, refused to be known as the son of Pharaoh’s daughter. 25 He chose to be mistreated along with the people of God rather than to enjoy the fleeting pleasures of sin. 26 He regarded disgrace for the sake of Christ as of greater value than the treasures of Egypt, because he was looking ahead to his reward. 27 By faith he left Egypt, not fearing the king’s anger; he persevered because he saw him who is invisible. 28 By faith he kept the Passover and the application of blood, so that the destroyer of the firstborn would not touch the firstborn of Israel.

29 By faith the people passed through the Red Sea as on dry land; but when the Egyptians tried to do so, they were drowned.

30 By faith the walls of Jericho fell, after the army had marched around them for seven days.

31 By faith the prostitute Rahab, because she welcomed the spies, was not killed with those who were disobedient.

The Daily Lectionary is a three year cyclical lectionary. We are currently in Year A. Beginning with the first Sunday of Advent in 2023, we will be in Year B. The year which ended at Advent 2022 was Year A. These readings complement the Sunday and festival readings: Thursday through Saturday readings help prepare the reader for the Sunday ahead; Monday through Wednesday readings help the reader reflect and digest on what they heard in worship. Revised Common Lectionary Daily Readings, copyright © 2005 Consultation on Common Texts. www.commontexts.org
The Daily Bible Readings for Wednesday, January 4, 2023
Psalm 72; Exodus 3:1-5; Hebrews 11:23-31
Posted by Kenny at 2:10:00 AM