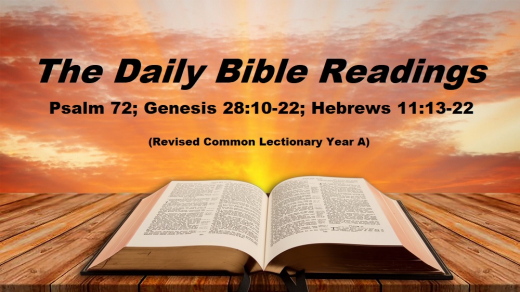 The Daily Bible Readings
Tuesday, January 3, 2023
Psalm 72; Genesis 28:10-22; Hebrews 11:13-22
(Revised Common Lectionary Year A)
A Psalm and A Prayer
Responsive Readings from the Psalms and Prayers
for Public Worship and Private Devotions

Psalm 72
Deus, judicium
Leader: Give the King your justice, O God,
People: and your righteousness to the King’s son;

Leader: That he may rule your people righteously
People: and the poor with justice.

Leader: That the mountains may bring prosperity to the people,
People: and the little hills bring righteousness.

Leader: He shall defend the needy among the people;
People: he shall rescue the poor and crush the oppressor.

Leader: He shall live as long as the sun and moon endure,
People: from one generation to another.

Leader: He shall come down like rain upon the mown field,
People: like showers that water the earth.

Leader: In his time shall the righteous flourish;
People: there shall be abundance of peace till the moon shall be no more.

Leader: He shall rule from sea to sea,
People: and from the River to the ends of the earth.

Leader: His foes shall bow down before him,
People: and his enemies lick the dust.

Leader: The kings of Tarshish and of the isles shall pay tribute,
People: and the kings of Arabia and Saba offer gifts.

Leader: All kings shall bow down before him,
People: and all the nations do him service.

Leader: For he shall deliver the poor who cries out in distress,
People: and the oppressed who has no helper.

Leader: He shall have pity on the lowly and poor;
People: he shall preserve the lives of the needy.

Leader: He shall redeem their lives from oppression and violence,
People: and dear shall their blood be in his sight.

Leader: Long may he live! and may there be given to him gold from Arabia;
People: may prayer be made for him always, and may they bless him all the day long.

Leader: May there be abundance of grain on the earth, growing thick even on the hilltops;
People: may its fruit flourish like Lebanon, and its grain like grass upon the earth.

Leader: May his Name remain for ever and be established as long as the sun endures;
People: may all the nations bless themselves in him and call him blessed.

Leader: Blessed be the Lord GOD, the God of Israel,
People: who alone does wondrous deeds!

Leader: And blessed be his glorious Name for ever!
People: and may all the earth be filled with his glory. Amen. Amen.

Heavenly Father, we praise You for the many blessings You bestow upon us. We honor You for the faithfulness You show to Your children from generation to generation. We pray that You will cleanse us from all unrighteousness so we can live and work with pure hearts. Fill us with Your Holy Spirit, so we can tell others of Your saving grace and mighty works, even as we pray in the name of our Lord and Savior, Jesus Christ:

28:10 Jacob left Beersheba and set out for Harran. 11 When he reached a certain place, he stopped for the night because the sun had set. Taking one of the stones there, he put it under his head and lay down to sleep. 12 He had a dream in which he saw a stairway resting on the earth, with its top reaching to heaven, and the angels of God were ascending and descending on it. 13 There above it stood the Lord, and he said: “I am the Lord, the God of your father Abraham and the God of Isaac. I will give you and your descendants the land on which you are lying. 14 Your descendants will be like the dust of the earth, and you will spread out to the west and to the east, to the north and to the south. All peoples on earth will be blessed through you and your offspring. 15 I am with you and will watch over you wherever you go, and I will bring you back to this land. I will not leave you until I have done what I have promised you.”

16 When Jacob awoke from his sleep, he thought, “Surely the Lord is in this place, and I was not aware of it.” 17 He was afraid and said, “How awesome is this place! This is none other than the house of God; this is the gate of heaven.”

18 Early the next morning Jacob took the stone he had placed under his head and set it up as a pillar and poured oil on top of it. 19 He called that place Bethel, though the city used to be called Luz.

20 Then Jacob made a vow, saying, “If God will be with me and will watch over me on this journey I am taking and will give me food to eat and clothes to wear 21 so that I return safely to my father’s household, then the Lord will be my God 22 and this stone that I have set up as a pillar will be God’s house, and of all that you give me I will give you a tenth.”

Hebrews 11:13-22
(Abraham Isaac and Jacob act on faith)
11:13 All these people were still living by faith when they died. They did not receive the things promised; they only saw them and welcomed them from a distance, admitting that they were foreigners and strangers on earth. 14 People who say such things show that they are looking for a country of their own. 15 If they had been thinking of the country they had left, they would have had opportunity to return. 16 Instead, they were longing for a better country—a heavenly one. Therefore God is not ashamed to be called their God, for he has prepared a city for them.

17 By faith Abraham, when God tested him, offered Isaac as a sacrifice. He who had embraced the promises was about to sacrifice his one and only son, 18 even though God had said to him, “It is through Isaac that your offspring will be reckoned.” 19 Abraham reasoned that God could even raise the dead, and so in a manner of speaking he did receive Isaac back from death.

20 By faith Isaac blessed Jacob and Esau in regard to their future.

21 By faith Jacob, when he was dying, blessed each of Joseph’s sons, and worshiped as he leaned on the top of his staff.

22 By faith Joseph, when his end was near, spoke about the exodus of the Israelites from Egypt and gave instructions concerning the burial of his bones.

The Daily Lectionary is a three year cyclical lectionary. We are currently in Year A. Beginning with the first Sunday of Advent in 2023, we will be in Year B. The year which ended at Advent 2022 was Year A. These readings complement the Sunday and festival readings: Thursday through Saturday readings help prepare the reader for the Sunday ahead; Monday through Wednesday readings help the reader reflect and digest on what they heard in worship. Revised Common Lectionary Daily Readings, copyright © 2005 Consultation on Common Texts. www.commontexts.org
The Daily Bible Readings for Tuesday, January 3, 2023
Psalm 72; Genesis 28:10-22; Hebrews 11:13-22
Posted by Kenny at 2:10:00 AM