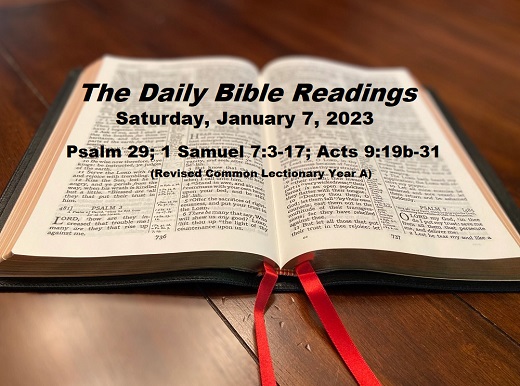 Leader: Ascribe to the LORD the glory due his Name;
People: worship the LORD in the beauty of holiness.

Leader: He makes Lebanon skip like a calf,
People: and Mount Hermon like a young wild ox.

Leader: The voice of the LORD makes the oak trees writhe
People: and strips the forests bare.

Leader: And in the temple of the LORD
People: all are crying, “Glory!”

O God, You alone are worthy to be praised. You sit enthroned in the beauty of holiness. You reign as King of the universe and our Heavenly Father. Lord Jesus, we praise You; for You gave Your life that we might be freed and cleansed from sin. And now, You reign at the right hand of the Majesty on high. Fill us with the Holy Spirit and empower us to serve You as we pray:

1 Samuel 7:3-17
(Samuel guides Israel to peace)
7:3 So Samuel said to all the Israelites, “If you are returning to the Lord with all your hearts, then rid yourselves of the foreign gods and the Ashtoreths and commit yourselves to the Lord and serve him only, and he will deliver you out of the hand of the Philistines.” 4 So the Israelites put away their Baals and Ashtoreths, and served the Lord only.

5 Then Samuel said, “Assemble all Israel at Mizpah, and I will intercede with the Lord for you.” 6 When they had assembled at Mizpah, they drew water and poured it out before the Lord. On that day they fasted and there they confessed, “We have sinned against the Lord.” Now Samuel was serving as leader of Israel at Mizpah.

10 While Samuel was sacrificing the burnt offering, the Philistines drew near to engage Israel in battle. But that day the Lord thundered with loud thunder against the Philistines and threw them into such a panic that they were routed before the Israelites. 11 The men of Israel rushed out of Mizpah and pursued the Philistines, slaughtering them along the way to a point below Beth Kar.

12 Then Samuel took a stone and set it up between Mizpah and Shen. He named it Ebenezer, saying, “Thus far the Lord has helped us.”

13 So the Philistines were subdued and they stopped invading Israel’s territory. Throughout Samuel’s lifetime, the hand of the Lord was against the Philistines. 14 The towns from Ekron to Gath that the Philistines had captured from Israel were restored to Israel, and Israel delivered the neighboring territory from the hands of the Philistines. And there was peace between Israel and the Amorites.

15 Samuel continued as Israel’s leader all the days of his life. 16 From year to year he went on a circuit from Bethel to Gilgal to Mizpah, judging Israel in all those places. 17 But he always went back to Ramah, where his home was, and there he also held court for Israel. And he built an altar there to the Lord.

Acts 9:19b-31
(Barnabas introduces Saul/Paul in Jerusalem)
9:19b [Saul] regained his strength.

Saul in Damascus and Jerusalem

Saul spent several days with the disciples in Damascus. 20 At once he began to preach in the synagogues that Jesus is the Son of God. 21 All those who heard him were astonished and asked, “Isn’t he the man who raised havoc in Jerusalem among those who call on this name? And hasn’t he come here to take them as prisoners to the chief priests?” 22 Yet Saul grew more and more powerful and baffled the Jews living in Damascus by proving that Jesus is the Messiah.

23 After many days had gone by, there was a conspiracy among the Jews to kill him, 24 but Saul learned of their plan. Day and night they kept close watch on the city gates in order to kill him. 25 But his followers took him by night and lowered him in a basket through an opening in the wall.

26 When he came to Jerusalem, he tried to join the disciples, but they were all afraid of him, not believing that he really was a disciple. 27 But Barnabas took him and brought him to the apostles. He told them how Saul on his journey had seen the Lord and that the Lord had spoken to him, and how in Damascus he had preached fearlessly in the name of Jesus. 28 So Saul stayed with them and moved about freely in Jerusalem, speaking boldly in the name of the Lord. 29 He talked and debated with the Hellenistic Jews, but they tried to kill him. 30 When the believers learned of this, they took him down to Caesarea and sent him off to Tarsus.

31 Then the church throughout Judea, Galilee and Samaria enjoyed a time of peace and was strengthened. Living in the fear of the Lord and encouraged by the Holy Spirit, it increased in numbers.

The Daily Lectionary is a three year cyclical lectionary. We are currently in Year A. Beginning with the first Sunday of Advent in 2023, we will be in Year B. The year which ended at Advent 2022 was Year A. These readings complement the Sunday and festival readings: Thursday through Saturday readings help prepare the reader for the Sunday ahead; Monday through Wednesday readings help the reader reflect and digest on what they heard in worship. Revised Common Lectionary Daily Readings, copyright © 2005 Consultation on Common Texts. www.commontexts.org
The Daily Bible Readings for Saturday, January 7, 2023
Psalm 29; 1 Samuel 7:3-17; Acts 9:19b-31
Posted by Kenny at 2:10:00 AM