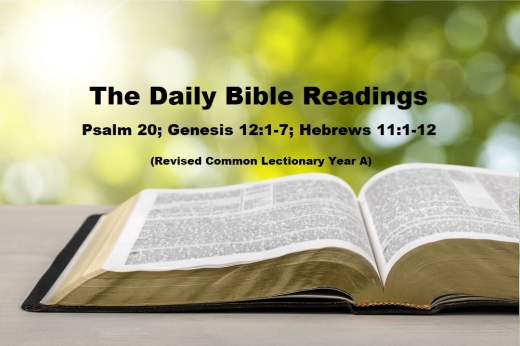 The Daily Bible Readings
Monday, January 2, 2023
Psalm 20; Genesis 12:1-7; Hebrews 11:1-12
(Revised Common Lectionary Year A)
A Psalm and A Prayer
Responsive Readings from the Psalms and Prayers
for Public Worship and Private Devotions

Psalm 20
Exaudiat te Dominus
Leader: May the LORD answer you in the day of trouble,
People: the Name of the God of Jacob defend you;

Leader: Send you help from his holy place
People: and strengthen you out of Zion;

Leader: Remember all your offerings
People: and accept your burnt sacrifice;

Leader: Grant you your heart’s desire
People: and prosper all your plans.

Leader: We will shout for joy at your victory and triumph in the Name of our God;
People: may the LORD grant all your requests.

Leader: Now I know that the LORD gives victory to his anointed;
People: he will answer him out of his holy heaven, with the victorious strength of his right hand.

Leader: Some put their trust in chariots and some in horses,
People: but we will call upon the Name of the LORD our God.

Leader: They collapse and fall down,
People: but we will arise and stand upright.

Leader: O LORD, give victory to the king
People: and answer us when we call.

O Lord Jesus, risen from the dead and reigning from on high, hear our prayers this day. We praise You for Your mighty deeds in our behalf. We humbly thank You for bearing Your cross for us. Empower us to bear our cross in behalf of others, that we might share the gospel message with them. Fill us with Your Spirit, that others might see Your love for them in the way we live each day. As Christians, we feel honored to bear Your holy name. Help us to bring You honor by the way we treat You and others. And now we pray once again the prayer You taught us:

12:1 The Lord had said to Abram, “Go from your country, your people and your father’s household to the land I will show you.

4 So Abram went, as the Lord had told him; and Lot went with him. Abram was seventy-five years old when he set out from Harran. 5 He took his wife Sarai, his nephew Lot, all the possessions they had accumulated and the people they had acquired in Harran, and they set out for the land of Canaan, and they arrived there.

6 Abram traveled through the land as far as the site of the great tree of Moreh at Shechem. At that time the Canaanites were in the land. 7 The Lord appeared to Abram and said, “To your offspring I will give this land.” So he built an altar there to the Lord, who had appeared to him.

11:1 Now faith is confidence in what we hope for and assurance about what we do not see. 2 This is what the ancients were commended for.

3 By faith we understand that the universe was formed at God’s command, so that what is seen was not made out of what was visible.

4 By faith Abel brought God a better offering than Cain did. By faith he was commended as righteous, when God spoke well of his offerings. And by faith Abel still speaks, even though he is dead.

8 By faith Abraham, when called to go to a place he would later receive as his inheritance, obeyed and went, even though he did not know where he was going. 9 By faith he made his home in the promised land like a stranger in a foreign country; he lived in tents, as did Isaac and Jacob, who were heirs with him of the same promise. 10 For he was looking forward to the city with foundations, whose architect and builder is God. 11 And by faith even Sarah, who was past childbearing age, was enabled to bear children because she considered him faithful who had made the promise. 12 And so from this one man, and he as good as dead, came descendants as numerous as the stars in the sky and as countless as the sand on the seashore.
Optional parts of the readings are set off in [square brackets.]

The Daily Lectionary is a three year cyclical lectionary. We are currently in Year A. Beginning with the first Sunday of Advent in 2023, we will be in Year B. The year which ended at Advent 2022 was Year A. These readings complement the Sunday and festival readings: Thursday through Saturday readings help prepare the reader for the Sunday ahead; Monday through Wednesday readings help the reader reflect and digest on what they heard in worship. Revised Common Lectionary Daily Readings, copyright © 2005 Consultation on Common Texts. www.commontexts.org
The Daily Bible Readings for Monday, January 2, 2023
Psalm 20; Genesis 12:1-7; Hebrews 11:1-12
Posted by Kenny at 2:10:00 AM