“Amazing Grace!” The Gospel Message for Sunday, January 15, 2023 — 2nd Sunday after the Epiphany 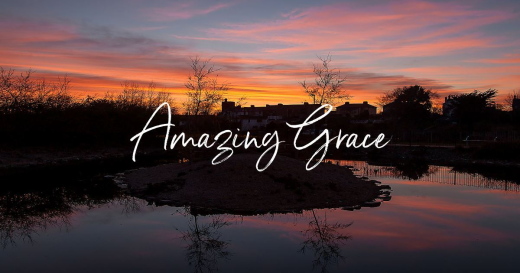 Our Gospel message comes to us today from the 1st chapter of John, beginning with the 29th verse.

The next day John saw Jesus coming toward him and said, “Look, the Lamb of God, who takes away the sin of the world! This is the one I meant when I said, ‘A man who comes after me has surpassed me because he was before me.’ I myself did not know him, but the reason I came baptizing with water was that he might be revealed to Israel.”

Then John gave this testimony: “I saw the Spirit come down from heaven as a dove and remain on him. And I myself did not know him, but the one who sent me to baptize with water told me, ‘The man on whom you see the Spirit come down and remain is the one who will baptize with the Holy Spirit.’ I have seen and I testify that this is God’s Chosen One.”

The next day John was there again with two of his disciples. When he saw Jesus passing by, he said, “Look, the Lamb of God!”

When the two disciples heard him say this, they followed Jesus. Turning around, Jesus saw them following and asked, “What do you want?”

They said, “Rabbi” (which means “Teacher”), “where are you staying?”

So they went and saw where he was staying, and they spent that day with him. It was about four in the afternoon.

Andrew, Simon Peter’s brother, was one of the two who heard what John had said and who had followed Jesus. The first thing Andrew did was to find his brother Simon and tell him, “We have found the Messiah” (that is, the Christ). And he brought him to Jesus.

Jesus looked at him and said, “You are Simon son of John. You will be called Cephas” (which, when translated, is Peter).

Dear Heavenly Father, you have revealed yourself to us through your Word, recorded in the Scriptures, spoken by the prophets, but most clearly, through the life, death, and resurrection of Jesus Christ, your Word become flesh. Through the power of your Holy Spirit, open our hearts and minds to your Word so that we might perceive your presence among us, embrace your truth for our lives, and gain the courage to witness your redeeming grace to others. This we ask in Christ’s holy name. Amen.

♫ “Amazing grace! How sweet the sound

I once was lost, but now am found;

There’s a reason the hymn ‘Amazing Grace’ remains the favorite hymn for so many people. The powerful lyrics remind us that because of Jesus, we are never lost because God is with us always.

A man stood in the outer court of heaven and saw a glorious crowd marching up, singing hymns and bearing banners of victory. They passed by him through the gates into the courts of heaven. “Who are these?” he asked.

One answered, “They are the prophets who are going to see God.”

“Alas, I am not one of them. I cannot enter here.”

Soon another group of great personalities came upwards on the road’ robed in white robes. They passed through the gates of heaven, and shouts of welcome were heard from within. “And who are these?” he asked.

“They are the apostles.” came the answer.

“I am not of their noble company. I cannot go in.”

Then another group came up the road, this time, the singing was even louder, and the members of this group waved palm branches. “Who are these people,” demanded the man.

The answer came, “They are the martyrs who died for their faith.”

“Alas, I belong to no such company,” said the man. He wondered if he would ever find a group to join so that he would be invited into heaven.

Then another group came up the road to the gates of heaven. The heavenly hosts within greeted this group with shouts of welcome, with songs of praise with shouts of jubilation. All of heaven seemed to rock with the excitement of this group being ready to pass through the heavenly gates. The man began to recognize some in this group.

There was the woman who had been accused of adultery and the notorious publican, and the thief on the cross and Zacchaeus, and the woman who anointed Jesus’ feet with oil, the prodigal son, and in the midst of them was the Savior Himself, Christ Jesus, leading them through the gates of heaven. As they were welcomed through the gates of heaven, songs of praise and triumph swelled to the highest vaults: a sevenfold amen sounded from the heavenly choirs.

The man was told, “These are the sinners, saved by amazing Grace.”

As he joined the group, the man said, “Blessed be God, I can go in with this group. I have been saved by amazing grace.”

Saved by amazing grace is the key phrase associated with our gospel text this morning. In this season of Epiphany, we see Jesus Christ revealed in all of his splendor, manifested in all His glory. One of the ways He is revealed this morning is the title John the Baptist gives Jesus, as he calls him the Lamb of God. He says in our text, “Behold the Lamb Lamb of God. God who takes away the sin of the world!!” John knew that the Lamb in the Old Testament on the Day of Atonement was the sign and symbol of God’s forgiving power as the blood of a sacrificed lamb was sprinkled on another lamb, which was driven from the people into the wilderness.

John was saying that the Lamb of God came for sinners. People who knew they were in bondage to sin. People who knew they needed a transformation in their lives, and as C.S.Lewis says, “God’s purpose is not just to create nice people or to effect some moral improvement in us.” “Rather,” says Lewis, “God became man to turn creatures into sons, into daughters, not simply to produce better people of the old kind but to produce a new kind of person.” “It costs God nothing to create nice things but to convert rebellious wills cost Him crucifixion.”

At conversion, God comes to rebuild the house. At first, you can understand what he is doing. He fixes the drains, stops the leaks in the roof, etc. You knew these jobs needed to be done, so you are not surprised. But pretty soon, he starts to tear down part of the house in such a way that it hurts a lot and doesn’t seem to make any sense. “What on earth is he up to?” you think. The explanation is that. He is building quite a different house from the one you thought of putting a new wing on over here, an extra floor over there. YOU thought you were just going to be made into a decent little cottage. But he is building a palace. Indeed, He intends to come and live in it Himself. “Do you not know that you are God’s temple and that God’s Spirit and dwells in you?” (I Cor. 3:16)

“But you are a chosen race, a royal priesthood, a holy nation, God’s own people, that you may declare the wonderful deeds of Him who called you out of darkness into His marvelous light. Once you were no people, but now you are God’s people; once you had not received mercy, but now you have received mercy” (I Peter 2:9, 10).

Indeed you and I are saved by amazing grace, the grace of the Lamb of God who is revealed in this season of Epiphany as the Lamb who takes away our sins so that the Father in Heaven can see us as white as snow, not the scarlet red of our sins. The purity of Christ’s AMAZING GRACE as He brings that grace of His own accord into our sinful lives by way of the cross and the resurrections is our salvation, our redemption. We are indeed changed, transformed made new people because of the Lamb of God. As we continue to see this Christ during this season of Epiphany, remember He is the New Adam, the new man, the new person, and as He comes into our YOU and I are changed, and we become not just changed-over-people but new people.

It begins slowly, then gradually, a change comes so that we don’t even know ourselves. We realize we are powerless to overcome sin in our lives by ourselves; we need His amazing grace.

We come to believe and trust in the Lamb of God, the Son of God, Jesus Christ, as the only great power which can restore and rebuild our lives.

Finally, we realize each day, we must turn our lives over to His power so that He can restore, rebuild, change, and forgive us our sins daily.

♫ “When we’ve been there ten thousand years,

Bright shining as the sun,

Than when we’d first begun.” ♫

Let us pray: Lord, through Your amazing grace and incredible love, I am who I am—a sinner saved by grace through faith in Christ Jesus, my Lord and Savior.

Thank You that I have been set free from the law of sin and death by the Spirit of life, Who indwells my heart and Who teaches all those who walk in newness of life… Your truth and knowledge—for You are a faithful and gracious God Who is rich in mercy and love.

Thank You that I have been redeemed by Christ and am fully justified in Your eyes because He was made sin on my account… and paid the full price for my sin—and how I praise You that by God’s grace, I have been brought back into fellowship with God.

Thank You that Christ is raised from the dead and has become the first-fruit of those that rise… and that I am a partaker of His eternal life, through time and into eternity… and thank You that there is no condemnation to those that are in Christ Jesus—thank You in Jesus’ precious name for Your amazing grace, Amen.

Seeking God?
Click HERE to find out more about how to have a personal
relationship with Jesus Christ

Scripture is taken from the Holy Bible, New International Version®, NIV® Copyright ©1973, 1978, 1984, 2011 by Biblica, Inc.® Used by permission. All rights reserved worldwide. Sermon contributed by Rev. Tim Zingale.
Saved by amazing grace is the key phrase associated with our gospel text this morning. In this season of Epiphany, we see Jesus Christ revealed in all of his splendor, manifested in all of His glory.
Posted by Kenny at 2:09:00 AM