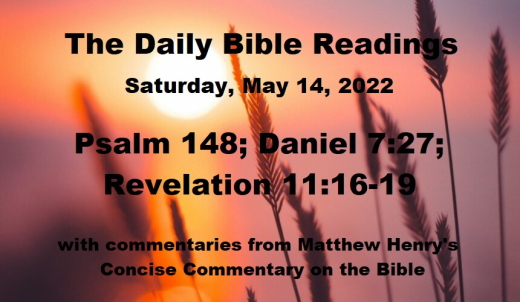 For you created my inmost being; you knit me together in my mother’s womb. I praise you because I am fearfully and wonderfully made; your works are wonderful, I know that full well.

John faithfully fulfilled the calling given to him even before his birth, which was announced by the angel Gabriel to his father Zacharias (Luke 1:11–19). Likewise, God created you for a very special purpose. Even before you were born, He had great plans for you as well (Ps. 139:13–16; Eph. 2:10).

Today’s Lectionary Readings:
From the Psalter
Psalm 148
God’s Splendor is Over Earth and Heaven
1 Praise the Lord.

5 Let them praise the name of the Lord,
for at his command they were created,
6 and he established them for ever and ever—
he issued a decree that will never pass away.

7 Praise the Lord from the earth,
you great sea creatures and all ocean depths,
8 lightning and hail, snow and clouds,
stormy winds that do his bidding,
9 you mountains and all hills,
fruit trees and all cedars,
10 wild animals and all cattle,
small creatures and flying birds,
11 kings of the earth and all nations,
you princes and all rulers on earth,
12 young men and women,
old men and children.

13 Let them praise the name of the Lord,
for his name alone is exalted;
his splendor is above the earth and the heavens.
14 And he has raised up for his people a horn,
the praise of all his faithful servants,
of Israel, the people close to his heart.

Commentary
The creatures placed in the upper world called on to praise the Lord (vv. 1-6); Also the creatures of this lower world, especially his own people (vv. 7-14).

Verses 1-6: We, in this dark and sinful world, know little of the heavenly world of light. But we know that there is above us a world of blessed angels. They are always praising God, therefore the psalmist shows his desire that God may be praised in the best manner; also we show that we have communion with spirits above, who are still praising him. The heavens, with all contained in them, declare the glory of God. They call on us, that both by word and deed, we glorify with them the Creator and Redeemer of the universe.

Verses 7-14: Even in this world, dark and bad as it is, God is praised. The powers of nature, be they ever so strong, so stormy, do what God appoints them, and no more. Those that rebel against God's word, show themselves to be more violent than even the stormy winds, yet they fulfill it. View the surface of the earth, mountains and all hills; from the barren tops of some, and the fruitful tops of others, we may fetch matter for praise. And assuredly creatures which have the powers of reason, ought to employ themselves in praising God. Let all manner of persons praise God. Those of every rank, high and low. Let us show that we are his saints by praising his name continually. He is not only our Creator, but our Redeemer; who made us a people near unto him. We may by "the Horn of his people" understand Christ, whom God has exalted to be a Prince and a Savior, who is indeed the defense and the praise of all his saints, and will be so for ever. In redemption, that unspeakable glory is displayed, which forms the source of all our hopes and joys. May the Lord pardon us, and teach our hearts to love him more and praise him better.

From the Historical Books
Daniel 7:27
A Dominion for the Holy Ones of the Most High
7:27 Then the sovereignty, power and greatness of all the kingdoms under heaven will be handed over to the holy people of the Most High. His kingdom will be an everlasting kingdom, and all rulers will worship and obey him.’

This refers to the second coming of our blessed Lord, when the saints shall triumph in the complete fall of Satan's kingdom. The saints of the Most High shall possess the kingdom for ever. Far be it from us to infer from hence, that dominion is founded on grace. It promises that the gospel kingdom shall be set up; a kingdom of light, holiness, and love; a kingdom of grace, the privileges and comforts of which shall be the earnest and first-fruits of the kingdom of glory. But the full accomplishment will be in the everlasting happiness of the saints, the kingdom that cannot be moved. The gathering together the whole family of God will be a blessedness of Christ's coming.

From the Apocalypse of John
Revelation 11:16-19
God’s Reign at the End of Time
11:16 And the twenty-four elders, who were seated on their thrones before God, fell on their faces and worshiped God, 17 saying:

“We give thanks to you, Lord God Almighty,
the One who is and who was,
because you have taken your great power
and have begun to reign.
18 The nations were angry,
and your wrath has come.
The time has come for judging the dead,
and for rewarding your servants the prophets
and your people who revere your name,
both great and small—
and for destroying those who destroy the earth.”

19 Then God’s temple in heaven was opened, and within his temple was seen the ark of his covenant. And there came flashes of lightning, rumblings, peals of thunder, an earthquake and a severe hailstorm.

Commentary
Under the seventh trumpet, all anti-christian powers are to be destroyed and there will be a glorious state of Christ's kingdom upon earth.

In the reign of antichrist, God's law was laid aside, and made void by traditions and decrees; the Scriptures were locked up from the people, but now they are brought to the view of all. This, like the ark, is a token of the presence of God returned to his people, and his favor toward them in Jesus Christ, as the Propitiation for their sins. The great blessing of the Reformation was attended with very awful providences; as by terrible things in righteousness God answered the prayers presented in his holy temple now opened.

Today’s Lectionary Readings are selected from the Revised Common Lectionary Daily Readings, a three-year cyclical lectionary. We are currently in Year C. Beginning with the first Sunday of Advent in 2022, we will be in Year A. The year which ended at Advent 2021 was Year B. These readings complement the Sunday and festival readings: Thursday through Saturday readings help prepare the reader for the Sunday ahead; Monday through Wednesday readings help the reader reflect and digest what they heard in worship. Revised Common Lectionary Daily Readings, copyright © 2005 Consultation on Common Texts. www.commontexts.org. The Bible texts of the Old Testament, Epistle, and Gospel lessons are from The Holy Bible, New International Version®, NIV® Copyright ©1973, 1978, 1984, 2011 by Biblica, Inc.® Used by permission. All rights reserved worldwide. Commentaries from Matthew Henry's Concise Commentary on the Bible.
Posted by Kenny at 1:10:00 AM No comments: 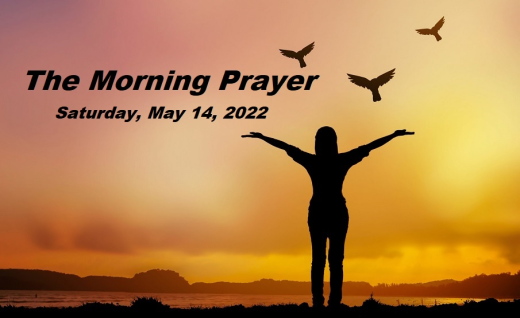 The Morning Prayer
Saturday, May 14, 2022
Therefore, since we have been justified through faith, we have peace with God through our Lord Jesus Christ, through whom we have gained access by faith into this grace in which we now stand. And we boast in the hope of the glory of God.
Romans 5:1-2, NIV
Lord our God, almighty and holy One, whose glory shines upon the earth so that we may find joy in you and may live rejoicing in all your loving-kindness, spread out your hands in blessing over all people. Spread your blessing over the happy and the sad, over the courageous and the weak. Shepherd them in your love, in the great grace you have given through Jesus Christ, confirmed in us through the Holy Spirit. Do not let us remain degraded and worthless. Lift our hearts above what is transitory, for you have given us something eternal to live by. Help us every day so that we can reach the goal you have set for us, for many others, and finally for all peoples of the earth. Amen.
Posted by Kenny at 1:08:00 AM No comments: 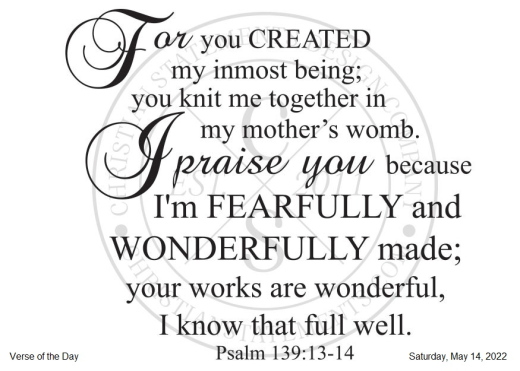 For you created my inmost being; you knit me together in my mother’s womb. I praise you because I am fearfully and wonderfully made; your works are wonderful, I know that full well.

John faithfully fulfilled the calling given to him even before his birth, which was announced by the angel Gabriel to his father Zacharias (Luke 1:11–19). Likewise, God created you for a very special purpose. Even before you were born, He had great plans for you as well (Ps. 139:13–16; Eph. 2:10).

Our Daily Bread — The Gift of Repentance 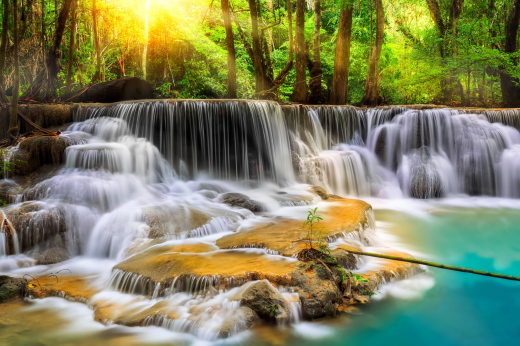 The Gift of Repentance

Rend your heart and not your garments. Return to the Lord your God, for he is gracious and compassionate. Joel 2:13

“No! I didn’t do it!” Jane heard her teenage son’s denial with a sinking heart, for she knew he wasn’t telling the truth. She breathed a prayer asking God for help before asking Simon again what happened. He continued to deny he was lying, until finally she threw her hands up in exasperation. Saying she needed a time out, she began to walk away when she felt a hand on her shoulder and heard his apology. He responded to the convicting of the Holy Spirit, and repented.

In the Old Testament book of Joel, God called His people to true repentance for their sins as He welcomed them to return to Him wholeheartedly (2:12). God didn’t seek outward acts of remorse, but rather that they would soften their hard attitudes: “Rend your heart and not your garments.” Joel reminded the Israelites that God is “gracious and compassionate, slow to anger and abounding in love” (v. 13).

We might find confessing our wrongdoing difficult, for in our pride we don’t want to admit our sins. Perhaps we’ve fudged the truth, and we justify our actions by saying it was only “a little white lie.” But when we heed God’s gentle yet firm prompting to repent, He’ll forgive us and cleanse us from all our sins (1 John 1:9). We can be free of guilt and shame, knowing we’re forgiven.

How did you feel when you told a “little white lie?” How did the realization of what you did bring conviction and ultimately repentance?

Jesus, You died on the cross so I’d be able to live in harmony with You and the Father. May I accept Your gift of love as I speak truthfully.

SCRIPTURE INSIGHT
Describing a coming “day of the Lord” (Joel 2:1) in which God would both decisively deal with evil and bring salvation to the world, Joel urged God’s people to repent and pray. For those in rebellion against God, the “day of the Lord” is a cause for alarm and fear (v. 1), “a day of darkness and gloom” (v. 2). “The day of the Lord is great; it is dreadful. Who can endure it?” (v. 11). But soon after these ominous words, Joel described an entirely different way God’s people could experience this “day.” Joel reminded his hearers of who God revealed Himself to be to Moses—“gracious and compassionate, slow to anger and abounding in love, and he relents from sending calamity” (v. 13). This was a God who would respond to their repentance not by bringing destruction but by providing restoration and abundance (vv. 14, 21–25).