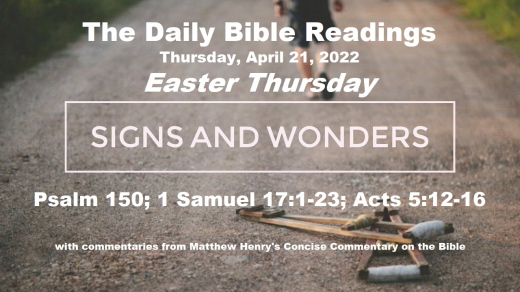 Commentary
A psalm of praise.

We are here stirred up to praise God. Praise God for his sanctuary, and the privileges we enjoy by having it among us; praise him because of his power and glory in the firmament. Those who praise the Lord in heaven, behold displays of his power and glory which we cannot now conceive. But the greatest of all his mighty acts is known in his earthly sanctuary. The holiness and the love of our God are more displayed in man's redemption, than in all his other works. Let us praise our God and Savior for it. We need not care to know what instruments of music are mentioned. Hereby is meant that in serving God we should spare no cost or pains. Praise God with strong faith; praise him with holy love and delight; praise him with entire confidence in Christ; praise him with believing triumph over the powers of darkness; praise him by universal respect to all his commands; praise him by cheerful submission to all his disposals; praise him by rejoicing in his love, and comforting ourselves in his goodness; praise him by promoting the interests of the kingdom of his grace; praise him by lively hope and expectation of the kingdom of his glory. Since we must shortly breathe our last, while we have breath let us praise the Lord; then we shall breathe our last with comfort. Let every thing that hath breath praise the Lord. Praise ye the Lord. Such is the very suitable end of a book inspired by the Spirit of God, written for the work of praise; a book which has supplied the songs of the church for more than three thousand years; a book which is quoted more frequently than any other by Christ and his apostles; a book which presents the loftiest ideas of God and his government, which is fitted to every state of human life, which sets forth every state of religious experience, and which bears simple and clear marks of its Divine origin.

4 A champion named Goliath, who was from Gath, came out of the Philistine camp. His height was six cubits and a span. 5 He had a bronze helmet on his head and wore a coat of scale armor of bronze weighing five thousand shekels; 6 on his legs he wore bronze greaves, and a bronze javelin was slung on his back. 7 His spear shaft was like a weaver’s rod, and its iron point weighed six hundred shekels. His shield bearer went ahead of him.

8 Goliath stood and shouted to the ranks of Israel, “Why do you come out and line up for battle? Am I not a Philistine, and are you not the servants of Saul? Choose a man and have him come down to me. 9 If he is able to fight and kill me, we will become your subjects; but if I overcome him and kill him, you will become our subjects and serve us.” 10 Then the Philistine said, “This day I defy the armies of Israel! Give me a man and let us fight each other.” 11 On hearing the Philistine’s words, Saul and all the Israelites were dismayed and terrified.

12 Now David was the son of an Ephrathite named Jesse, who was from Bethlehem in Judah. Jesse had eight sons, and in Saul’s time he was very old. 13 Jesse’s three oldest sons had followed Saul to the war: The firstborn was Eliab; the second, Abinadab; and the third, Shammah. 14 David was the youngest. The three oldest followed Saul, 15 but David went back and forth from Saul to tend his father’s sheep at Bethlehem.

16 For forty days the Philistine came forward every morning and evening and took his stand.

17 Now Jesse said to his son David, “Take this ephah of roasted grain and these ten loaves of bread for your brothers and hurry to their camp. 18 Take along these ten cheeses to the commander of their unit. See how your brothers are and bring back some assurance from them. 19 They are with Saul and all the men of Israel in the Valley of Elah, fighting against the Philistines.”

20 Early in the morning David left the flock in the care of a shepherd, loaded up and set out, as Jesse had directed. He reached the camp as the army was going out to its battle positions, shouting the war cry. 21 Israel and the Philistines were drawing up their lines facing each other. 22 David left his things with the keeper of supplies, ran to the battle lines and asked his brothers how they were. 23 As he was talking with them, Goliath, the Philistine champion from Gath, stepped out from his lines and shouted his usual defiance, and David heard it.

Verses 1-11: Men so entirely depend upon God in all things, that when he withdraws his help, the most valiant and resolute cannot find their hearts or hands, as daily experience shows.

Verses 12-23: Jesse little thought of sending his son to the army at that critical juncture; but the wise God orders actions and affairs, so as to serve his designs.

From the Acts of the Apostles
Acts 5:12-16
Signs and Wonders by the Apostles
5:12 The apostles performed many signs and wonders among the people. And all the believers used to meet together in Solomon’s Colonnade. 13 No one else dared join them, even though they were highly regarded by the people. 14 Nevertheless, more and more men and women believed in the Lord and were added to their number. 15 As a result, people brought the sick into the streets and laid them on beds and mats so that at least Peter’s shadow might fall on some of them as he passed by. 16 Crowds gathered also from the towns around Jerusalem, bringing their sick and those tormented by impure spirits, and all of them were healed.

Commentary
The power which accompanied the preaching of the gospel.

The separation of hypocrites by distinguishing judgments, should make the sincere cleave closer to each other and to the gospel ministry. Whatever tends to the purity and reputation of the church, promotes its enlargement; but that power alone which wrought such miracles by the apostles, can rescue sinners from the power of sin and Satan, and add believers to His worshipers. Christ will work by all his faithful servants; and every one who applies to him shall be healed.

Today’s Lectionary Readings are selected from the Revised Common Lectionary Daily Readings, a three-year cyclical lectionary. We are currently in Year C. Beginning with the first Sunday of Advent in 2022, we will be in Year A. The year which ended at Advent 2021 was Year B. These readings complement the Sunday and festival readings: Thursday through Saturday readings help prepare the reader for the Sunday ahead; Monday through Wednesday readings help the reader reflect and digest what they heard in worship. Revised Common Lectionary Daily Readings, copyright © 2005 Consultation on Common Texts. www.commontexts.org. The Bible texts of the Old Testament, Epistle, and Gospel lessons are from The Holy Bible, New International Version®, NIV® Copyright ©1973, 1978, 1984, 2011 by Biblica, Inc.® Used by permission. All rights reserved worldwide. Commentaries from Matthew Henry's Concise Commentary on the Bible.
Posted by Kenny at 1:10:00 AM No comments: 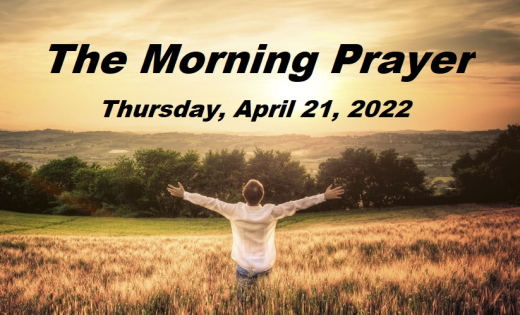 The Morning Prayer
Thursday, April 21, 2022
He ransoms me unharmed from the battle waged against me, even though many oppose me.
Psalm 55:18, NIV
Dear Father in heaven, grant that we may come into your presence as your children. Give to us all that we need each day, so that we are no longer caught in the turmoil of life but can receive your peace. For you care for us as your children, and we are allowed to go confidently through all the troubles of these times because our way leads to you, the eternal Father in heaven. Keep us from going astray and from spending our efforts on what is temporal and cannot last. Let your light strengthen us in what is of heaven, in what is eternally true for our lives. Amen.
Posted by Kenny at 1:08:00 AM No comments: 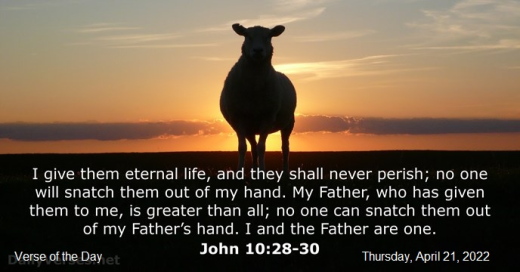 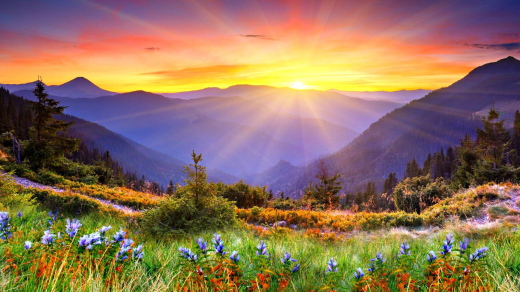 There will be no more death. Revelation 21:4

Since it was the week after Easter, our five-year-old son, Wyatt, had heard plenty of resurrection talk. He always had questions—usually real stumpers. I was driving, and he was buckled into his seat behind me. Wyatt peered out the window, deep in thought. “Daddy,” he said, pausing and preparing to ask me a tough one. “When Jesus brings us back to life, are we going to be really alive—or just alive in our heads?”

The apostle John describes our certain future as “a new heaven and a new earth” (Revelation 21:1). In that holy city, “God himself will be with [us] and be [our] God” (v. 3). Because of Christ’s victory, we’re promised a future where there’s no more tears, no evil arrayed against God and His people. In this good future, “There will be no more death or mourning or crying or pain, for the old order of things has passed away” (v. 4).

In other words, in the future God promises, we’ll be really alive. We’ll be so alive that our life now will seem a mere shadow.

Where do you experience death in your life? If God promises that death is doomed and we’re going to really live, how does this renew your hope?

God, You said death will meet its end and You promise me genuine life. Thank You.

SCRIPTURE INSIGHT
Today’s passage gives us a glimpse of heaven, describing it as a physical place (Revelation 21:1–2). Jesus said He was going to prepare a place for us (John 14:2–3), and this promise is fulfilled in the Holy City, the New Jerusalem, (Revelation 21:2). While it’s a great comfort that heaven is a perfect place (v. 4), the most important thing is that it’s the dwelling place of God (v. 3).