The Twelve Days of Christmas — The Twelfth Day

The Twelve Days of Christmas
The Fourth Day

The Fourth Day of Christmas 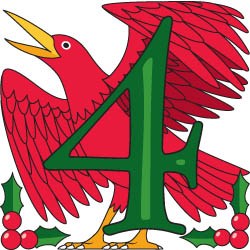 The carol says On The Fourth Day of Christmas, My True Love Gave To Me...

Four Gospels (Matthew, Mark, Luke & John) …
It could have also meant the Four Evangelist
Posted by Kenny at 2:06:00 AM