The Twelve Days of Christmas — The Fifth Day

The Twelve Days of Christmas
The Fifth Day


The Fifth Day of Christmas 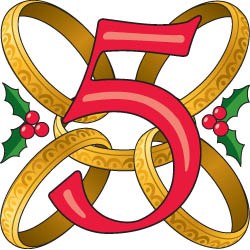 The carol says On The Fifth Day of Christmas, My True Love Gave To Me...

The first five books of the Bible, The Torah or also known as Pentateuch. (Genesis, Exodus, Leviticus, Numbers & Deuteronomy). These books also contained the law condemning us of our sins.
Posted by Kenny at 2:05:00 AM