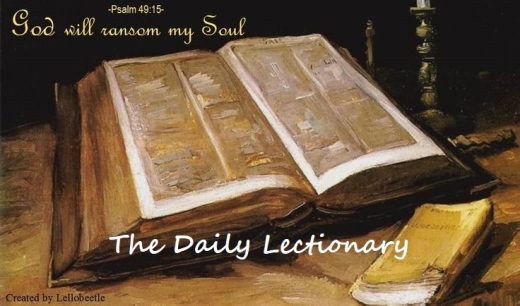 “My heart exults in the Lord;
my strength is exalted in my God.
My mouth derides my enemies
because I rejoice in your victory.

2 There is no Holy One like the Lord,
no one besides you;
there is no Rock like our God.
3 Talk no more so very proudly;
let not arrogance come from your mouth,
for the Lord is a God of knowledge,
and by him actions are weighed.
4 The bows of the mighty are broken,
but the feeble gird on strength.
5 Those who were full have hired themselves out for bread,
but those who were hungry are fat with spoil.
The barren has borne seven,
but she who has many children is forlorn.
6 The Lord kills and brings to life;
he brings down to Sheol and raises up.
7 The Lord makes poor and makes rich;
he brings low; he also exalts.
8 He raises up the poor from the dust;
he lifts the needy from the ash heap
to make them sit with princes
and inherit a seat of honor.
For the pillars of the earth are the Lord’s,
and on them he has set the world.

9 He will guard the feet of his faithful ones,
but the wicked will perish in darkness,
for not by might does one prevail.
10 The Lord! His adversaries will be shattered;
the Most High will thunder in heaven.
The Lord will judge the ends of the earth;
he will give strength to his king
and exalt the power of his anointed.”

The Birth of Isaac

21:1 The Lord dealt with Sarah as he had said, and the Lord did for Sarah as he had promised. 2 Sarah conceived and bore Abraham a son in his old age, at the time of which God had spoken to him. 3 Abraham gave the name Isaac to his son whom Sarah bore him. 4 And Abraham circumcised his son Isaac when he was eight days old, as God had commanded him. 5 Abraham was a hundred years old when his son Isaac was born to him. 6 Now Sarah said, “God has brought laughter for me; everyone who hears will laugh with me.” 7 And she said, “Who would ever have said to Abraham that Sarah would nurse children? Yet I have borne him a son in his old age.”

Hagar and Ishmael Sent Away

8 The child grew and was weaned, and Abraham made a great feast on the day that Isaac was weaned. 9 But Sarah saw the son of Hagar the Egyptian, whom she had borne to Abraham, playing with her son Isaac. 10 So she said to Abraham, “Cast out this slave woman with her son, for the son of this slave woman shall not inherit along with my son Isaac.” 11 The matter was very distressing to Abraham on account of his son. 12 But God said to Abraham, “Do not be distressed because of the boy and because of your slave woman; whatever Sarah says to you, do as she tells you, for it is through Isaac that offspring shall be named for you. 13 As for the son of the slave woman, I will make a nation of him also, because he is your offspring.” 14 So Abraham rose early in the morning and took bread and a skin of water and gave it to Hagar, putting it on her shoulder, along with the child, and sent her away. And she departed and wandered about in the wilderness of Beer-sheba.

15 When the water in the skin was gone, she cast the child under one of the bushes. 16 Then she went and sat down opposite him a good way off, about the distance of a bowshot, for she said, “Do not let me look on the death of the child.” And as she sat opposite him, she lifted up her voice and wept. 17 And God heard the voice of the boy, and the angel of God called to Hagar from heaven and said to her, “What troubles you, Hagar? Do not be afraid, for God has heard the voice of the boy where he is. 18 Come, lift up the boy and hold him fast with your hand, for I will make a great nation of him.” 19 Then God opened her eyes, and she saw a well of water. She went and filled the skin with water and gave the boy a drink.

The Allegory of Hagar and Sarah

4:21 Tell me, you who desire to be subject to the law, will you not listen to the law? 22 For it is written that Abraham had two sons, one by an enslaved woman and the other by a free woman. 23 One, the child of the enslaved woman, was born according to the flesh; the other, the child of the free woman, was born through the promise. 24 Now this is an allegory: these women are two covenants. One woman, in fact, is Hagar, from Mount Sinai, bearing children for slavery. 25 Now Hagar is Mount Sinai in Arabia and corresponds to the present Jerusalem, for she is in slavery with her children. 26 But the other woman corresponds to the Jerusalem above; she is free, and she is our mother. 27 For it is written,

28 Now you, my brothers and sisters, are children of the promise, like Isaac. 29 But just as at that time the child who was born according to the flesh persecuted the child who was born according to the Spirit, so it is now also. 30 But what does the scripture say? “Drive out the enslaved woman and her child, for the child of the enslaved woman will not share the inheritance with the child of the free woman.” 31 So then, brothers and sisters, we are children, not of an enslaved woman but of the free woman. 5:1 For freedom Christ has set us free. Stand firm, therefore, and do not submit again to a yoke of slavery.

The Daily Lectionary is a three year cyclical lectionary. We are currently in Year A. Beginning with the first Sunday of Advent in 2023, we will be in Year B. The year which ended at Advent 2022 was Year A. These readings complement the Sunday and festival readings: Thursday through Saturday readings help prepare the reader for the Sunday ahead; Monday through Wednesday readings help the reader reflect and digest on what they heard in worship. Revised Common Lectionary Daily Readings, copyright © 2005 Consultation on Common Texts. www.commontexts.org
The Daily Bible Readings for Tuesday, December 20, 2022
1 Samuel 2:1-10; Genesis 21:1-21; Galatians 4:21—5:1
Posted by Kenny at 2:10:00 AM