“Who are you at the foot of the cross?” The Gospel Message for Sunday, November 20, 2022 — Christ the King Sunday 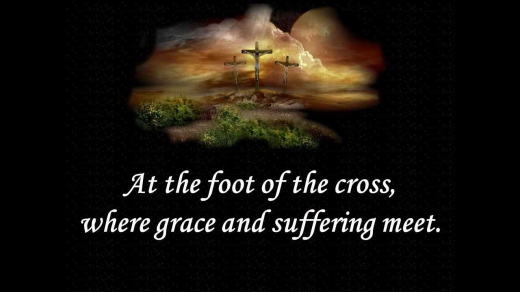 Our Gospel message comes to us today from the 23rd chapter of Luke, beginning with the 33rd verse.

23:33 When they came to the place that is called The Skull, they crucified Jesus there with the criminals, one on his right and one on his left. 34 Then Jesus said, “Father, forgive them; for they do not know what they are doing.” And they cast lots to divide his clothing. 35 And the people stood by, watching; but the leaders scoffed at him, saying, “He saved others; let him save himself if he is the Messiah of God, his chosen one!” 36 The soldiers also mocked him, coming up and offering him sour wine, 37 and saying, “If you are the King of the Jews, save yourself!” 38 There was also an inscription over him, “This is the King of the Jews.”

39 One of the criminals who were hanged there kept deriding him and saying, “Are you not the Messiah? Save yourself and us!” 40 But the other rebuked him, saying, “Do you not fear God, since you are under the same sentence of condemnation? 41 And we indeed have been condemned justly, for we are getting what we deserve for our deeds, but this man has done nothing wrong.” 42 Then he said, “Jesus, remember me when you come into your kingdom.” 43 He replied, “Truly I tell you, today you will be with me in Paradise.”

All mighty God, we thank you for your word and the way that you in it revealed to us who you are and what you’ve done for us in Christ. Now, as we open that word, we pray that your Spirit may be present, that all thoughts of worry or distraction may be removed and that the Spirit will allow us to hear your voice. And so, oh God, fill us with your Spirit through the reading and proclamation of your word this day. We pray in Jesus’ name. Amen.

“Who are you at the foot of the cross?”

In the name of the Father, and of the Son, and of the Holy Spirit, the Holy Three In One who brings us into Paradise.

Dear Brothers and Sisters in Christ,

Throughout the history of the church, devoted men and women of God have experienced visions and dreams that have given them what felt like a first-hand vision of the crucifixion of Christ. Several years ago, Mel Gibson’s movie, The Passion of the Christ, gave that same vision to multiple people in movie theaters worldwide.

In my readings of some early church writings, I found a monograph from an unnamed ascetic monk. This monk had a vision of the crucifixion that was very real in his mind, almost as if he was really there. He even said of his vision that it was the most terrifying thing he had ever seen. He said he prayed for two things right after having the vision. The first thing he prayed for was that he would never have such a vision again, and secondly, he thanked God for not making Him one of the disciples, for he was sure that he would have run away mad after seeing Christ die.

It is the heaviness of God upon us because, within this small text, we can probably see ourselves in the people gathered before that throne. We see for ourselves the horrific vision of our king being killed on a cross.

Luke’s telling of the crucifixion of Christ is accented by something called the four-fold rejection of Christ. In four different ways, the people gathered rejected Christ as their King, despite it being written above Him.

They cast lots for His clothing. Christ’s body was stripped almost naked and hung on the cross. Below him lay his clothing, the things that would make Him decent before the view of the world, but instead of going up and covering the Lord, the people below him rolled dice to see who would get his tunic, his robe, his sandals. We do this when we cast lots amongst ourselves, trying to get Christ’s grace only for ourselves. We do this when we push other people out so that we can try to keep Christ as our best friend, not yours, and when we turn the church into a country club where only certain members are invited.

They sat there, just watching. The Greek word that Luke uses is the same word that someone would use while watching the gladiators or another Roman game of sport. We spectate. We don’t wish to become a part of the action. For fear, or perhaps just because of shock, we look at the way that the world responds to Christ and the church, and we sit by idly. Maybe we associate with Him in the closed doors of the upper room, but we leave Him lonely and bloodied before the world.

They gave Him sour wine. The soldiers seemed to have had some wine lying around that was not useful for anything; no one would have consumed it. In fact, it was likely only used as a cleaning agent for the soldiers. Not fit for the inside of the body and barely fit for the outside. It is this that they gave to Christ. And we do the same. Instead of giving God our lives, we often give God the rejected parts of ourselves—the time that we wouldn’t use in any other way becomes our self-righteous “sacrifice” to God. I recently talked to a friend who volunteered at a clothing drive. He was disgusted by the number of people who donated used, even soiled, undergarments.

They said, “If you are the Christ, save yourself!” The thief on the cross added, “and us!” All too often, we look at the church, whether worldwide or the church in the United States, and demand of Jesus, “save yourself! And us!” We tell Christ that if He really wants to save the world, then He should just work a miracle and make Hindus come to Christ on their own, and to make sinners better simply through some sort of magic trick. We even demand the same thing of ourselves, we look to Christ, and we say, “save yourself! and us!”

Luke’s telling of the story of Christ’s crucifixion, however, includes a character not given words in any of the other Gospel stories. In Luke’s Gospel, the thief on the cross speaks. He says, “Do you not fear God? For you are under the same condemnation, but this man is innocent!” And then He turns to Christ and says, “Jesus, remember me when you come into your Kingdom.”

But even before you sin, Christ said of you, “Father, forgive them; for they do not know what they are doing.”

Oh, Jesus, You are the King of Glory. You are the Lord of Lords and King of Kings. And we pray that your Kingdom will reign forever in our hearts and in this world.

Lord, we pray for your Kingdom to come here now, bringing a kingdom of justice, righteousness, hope, love, peace, mercy, and grace for all. Lord, we ask that you rule in our hearts, lead in this world and govern over your kingdom.

But Lord, honestly, We often have our own plans and agendas and want to be rulers of our world. Forgive us for those times. And Lord, we live in a time that would rather idolize the King of Pop than worship you. Help us to know how to live as your Kingdom People in these times. And Lord, there are a lot of Kings in this world who terrorize, over-tax, humiliate, over-exploit, and abuse those they are to lead. Help us to spread the good news of the different kind of King you are.

Seeking God?
Click HERE to find out more about how to have a personal
relationship with Jesus Christ

Scripture taken from the New Revised Standard Version (NRSV)® Bible, copyright © 1989 the Division of Christian Education of the National Council of the Churches of Christ in the United States of America. Used by permission. All rights reserved.
Posted by Kenny at 1:09:00 AM