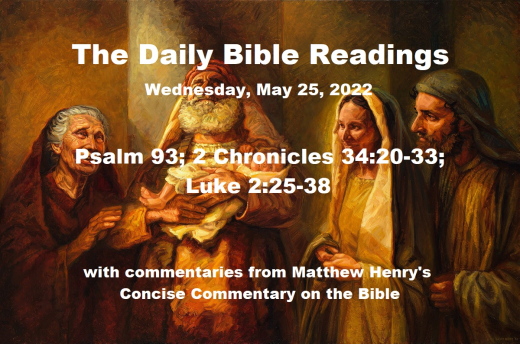 My dear brothers and sisters, take note of this: Everyone should be quick to listen, slow to speak and slow to become angry…

Though the Christian community places high regard on the talent of eloquent speech, James places the accent on listening. It is the person who listens intently to the Word of truth who progresses in godliness.

Commentary
The majesty, power, and holiness of Christ's kingdom.

The Lord might have displayed only his justice, holiness, and awful power, in his dealings with fallen men; but he has been pleased to display the riches of his mercy, and the power of his renewing grace. In this great work, the Father has given all power to his Son, the Lord from heaven, who has made atonement for our sins. He not only can pardon, but deliver and protect all who trust in him. His word is past, and all the saints may rely upon it. Whatever was foretold concerning the kingdom of the Messiah, must be fulfilled in due time. All his people ought to be very strictly pure. God's church is his house; it is a holy house, cleansed from sin, and employed in his service. Where there is purity, there shall be peace. Let all carefully look if this kingdom is set up in their hearts.

From the Historical Books
2 Chronicles 34:20-33
Josiah Consults the Prophet Huldah
34:20 He gave these orders to Hilkiah, Ahikam son of Shaphan, Abdon son of Micah, Shaphan the secretary and Asaiah the king’s attendant: 21 “Go and inquire of the Lord for me and for the remnant in Israel and Judah about what is written in this book that has been found. Great is the Lord’s anger that is poured out on us because those who have gone before us have not kept the word of the Lord; they have not acted in accordance with all that is written in this book.”

22 Hilkiah and those the king had sent with him went to speak to the prophet Huldah, who was the wife of Shallum son of Tokhath, the son of Hasrah, keeper of the wardrobe. She lived in Jerusalem, in the New Quarter.

23 She said to them, “This is what the Lord, the God of Israel, says: Tell the man who sent you to me, 24 ‘This is what the Lord says: I am going to bring disaster on this place and its people—all the curses written in the book that has been read in the presence of the king of Judah. 25 Because they have forsaken me and burned incense to other gods and aroused my anger by all that their hands have made, my anger will be poured out on this place and will not be quenched.’ 26 Tell the king of Judah, who sent you to inquire of the Lord, ‘This is what the Lord, the God of Israel, says concerning the words you heard: 27 Because your heart was responsive and you humbled yourself before God when you heard what he spoke against this place and its people, and because you humbled yourself before me and tore your robes and wept in my presence, I have heard you, declares the Lord. 28 Now I will gather you to your ancestors, and you will be buried in peace. Your eyes will not see all the disaster I am going to bring on this place and on those who live here.’”

So they took her answer back to the king.

29 Then the king called together all the elders of Judah and Jerusalem. 30 He went up to the temple of the Lord with the people of Judah, the inhabitants of Jerusalem, the priests and the Levites—all the people from the least to the greatest. He read in their hearing all the words of the Book of the Covenant, which had been found in the temple of the Lord. 31 The king stood by his pillar and renewed the covenant in the presence of the Lord—to follow the Lord and keep his commands, statutes and decrees with all his heart and all his soul, and to obey the words of the covenant written in this book.

32 Then he had everyone in Jerusalem and Benjamin pledge themselves to it; the people of Jerusalem did this in accordance with the covenant of God, the God of their ancestors.

33 Josiah removed all the detestable idols from all the territory belonging to the Israelites, and he had all who were present in Israel serve the Lord their God. As long as he lived, they did not fail to follow the Lord, the God of their ancestors.

As the years of infancy cannot be useful to our fellow-creatures, our earliest youth should be dedicated to God, that we may not waste any of the remaining short space of life. Happy and wise are those who seek the Lord and prepare for usefulness at an early age, when others are pursuing sinful pleasures, contracting bad habits, and forming ruinous connections. Who can express the anguish prevented by early piety, and its blessed effects? Diligent self-examination and watchfulness will convince us of the deceitfulness and wickedness of our own hearts, and the sinfulness of our lives. We are here encouraged to humble ourselves before God, and to seek unto him, as Josiah did. And believers are here taught, not to fear death, but to welcome it, when it takes them away from the evil to come. Nothing hastens the ruin of a people, nor ripens them for it, more than their disregard of the attempts made for their reformation. Be not deceived, God is not mocked. The current and tide of affections only turns at the command of Him who raises up those that are dead in trespasses and sins. We behold peculiar loveliness, in the grace the Lord bestows on those, who in tender years seek to know and to love the Savior. Hath Jesus, the Day-spring from on high, visited you? Can you trace your knowledge of this light and life of man, like Josiah, from your youth? Oh the unspeakable happiness of becoming acquainted with Jesus from our earliest years!

From the Gospels
Luke 2:25-38
The Spirit of God on Simeon and Anna
2:25 Now there was a man in Jerusalem called Simeon, who was righteous and devout. He was waiting for the consolation of Israel, and the Holy Spirit was on him. 26 It had been revealed to him by the Holy Spirit that he would not die before he had seen the Lord’s Messiah. 27 Moved by the Spirit, he went into the temple courts. When the parents brought in the child Jesus to do for him what the custom of the Law required, 28 Simeon took him in his arms and praised God, saying:

29 “Sovereign Lord, as you have promised,
you may now dismiss your servant in peace.
30 For my eyes have seen your salvation,
31    which you have prepared in the sight of all nations:
32 a light for revelation to the Gentiles,
and the glory of your people Israel.”

33 The child’s father and mother marveled at what was said about him. 34 Then Simeon blessed them and said to Mary, his mother: “This child is destined to cause the falling and rising of many in Israel, and to be a sign that will be spoken against, 35 so that the thoughts of many hearts will be revealed. And a sword will pierce your own soul too.”

36 There was also a prophet, Anna, the daughter of Penuel, of the tribe of Asher. She was very old; she had lived with her husband seven years after her marriage, 37 and then was a widow until she was eighty-four. She never left the temple but worshiped night and day, fasting and praying. 38 Coming up to them at that very moment, she gave thanks to God and spoke about the child to all who were looking forward to the redemption of Jerusalem.

Verses 25-35: The same Spirit that provided for the support of Simeon's hope, provided for his joy. Those who would see Christ must go to his temple. Here is a confession of his faith, that this Child in his arms was the Savior, the salvation itself, the salvation of God's appointing. He bids farewell to this world. How poor does this world look to one that has Christ in his arms, and salvation in his view! See here, how comfortable is the death of a good man; he departs in peace with God, peace with his own conscience, in peace with death. Those that have welcomed Christ, may welcome death. Joseph and Mary marveled at the things which were spoken of this Child. Simeon shows them likewise, what reason they had to rejoice with trembling. And Jesus, his doctrine, and people, are still spoken against; his truth and holiness are still denied and blasphemed; his preached word is still the touchstone of men's characters. The secret good affections in the minds of some, will be revealed by their embracing Christ; the secret corruptions of others will be revealed by their enmity to Christ. Men will be judged by the thoughts of their hearts concerning Christ. He shall be a suffering Jesus; his mother shall suffer with him, because of the nearness of her relation and affection.

Verses 36-38: There was much evil then in the church, yet God left not himself without witness. Anna always dwelt in, or at least attended at, the temple. She was always in a praying spirit; gave herself to prayer, and in all things she served God. Those to whom Christ is made known, have great reason to thank the Lord. She taught others concerning him. Let the example of the venerable saints, Simeon and Anna, give courage to those whose hoary heads are, like theirs, a crown of glory, being found in the way of righteousness. The lips soon to be silent in the grave, should be showing forth the praises of the Redeemer. In all things it became Christ to be made like unto his brethren, therefore he passed through infancy and childhood as other children, yet without sin, and with manifest proofs of the Divine nature in him. By the Spirit of God all his faculties performed their offices in a manner not seen in any one else. Other children have foolishness bound in their hearts, which appears in what they say or do, but he was filled with wisdom, by the influence of the Holy Ghost; every thing he said and did, was wisely said and wisely done, above his years. Other children show the corruption of their nature; nothing but the grace of God was upon him.