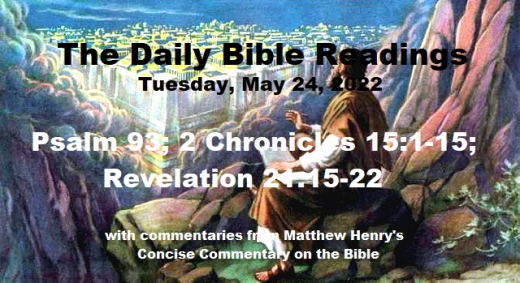 In the Greco-Roman world, giving honor to others was done according to status. Believers were to honor others, even those of lower status, above themselves—a radical teaching. Only a mind renewed by the Holy Spirit could possibly do this.

Commentary
The majesty, power, and holiness of Christ's kingdom.

The Lord might have displayed only his justice, holiness, and awful power, in his dealings with fallen men; but he has been pleased to display the riches of his mercy, and the power of his renewing grace. In this great work, the Father has given all power to his Son, the Lord from heaven, who has made atonement for our sins. He not only can pardon, but deliver and protect all who trust in him. His word is past, and all the saints may rely upon it. Whatever was foretold concerning the kingdom of the Messiah, must be fulfilled in due time. All his people ought to be very strictly pure. God's church is his house; it is a holy house, cleansed from sin, and employed in his service. Where there is purity, there shall be peace. Let all carefully look if this kingdom is set up in their hearts.

From the Historical Books
2 Chronicles 15:1-15
The Spirit of God on Azariah
15:1 The Spirit of God came on Azariah son of Oded. 2 He went out to meet Asa and said to him, “Listen to me, Asa and all Judah and Benjamin. The Lord is with you when you are with him. If you seek him, he will be found by you, but if you forsake him, he will forsake you. 3 For a long time Israel was without the true God, without a priest to teach and without the law. 4 But in their distress they turned to the Lord, the God of Israel, and sought him, and he was found by them. 5 In those days it was not safe to travel about, for all the inhabitants of the lands were in great turmoil. 6 One nation was being crushed by another and one city by another, because God was troubling them with every kind of distress. 7 But as for you, be strong and do not give up, for your work will be rewarded.”

8 When Asa heard these words and the prophecy of Azariah son of Oded the prophet, he took courage. He removed the detestable idols from the whole land of Judah and Benjamin and from the towns he had captured in the hills of Ephraim. He repaired the altar of the Lord that was in front of the portico of the Lord’s temple.

9 Then he assembled all Judah and Benjamin and the people from Ephraim, Manasseh and Simeon who had settled among them, for large numbers had come over to him from Israel when they saw that the Lord his God was with him.

10 They assembled at Jerusalem in the third month of the fifteenth year of Asa’s reign. 11 At that time they sacrificed to the Lord seven hundred head of cattle and seven thousand sheep and goats from the plunder they had brought back. 12 They entered into a covenant to seek the Lord, the God of their ancestors, with all their heart and soul. 13 All who would not seek the Lord, the God of Israel, were to be put to death, whether small or great, man or woman. 14 They took an oath to the Lord with loud acclamation, with shouting and with trumpets and horns. 15 All Judah rejoiced about the oath because they had sworn it wholeheartedly. They sought God eagerly, and he was found by them. So the Lord gave them rest on every side.

Commentary
The people make a solemn covenant with God.

The work of complete reformation appeared so difficult, that Asa had not courage to attempt it, till assured of Divine assistance and acceptance. He and his people offered sacrifices to God; thanksgiving for the favors they had received, and supplication for further favors. Prayers and praises are now our spiritual sacrifices. The people, of their own will, covenanted to seek the Lord, each for himself, with earnestness. What is religion but seeking God, inquiring after him, applying to him upon all occasions? We make nothing of our religion, if we do not make heart-work of it; God will have all the heart, or none. Our devoutness to God our Savior, should be avowed and shown in the most solemn and public manner. What is done in hypocrisy is a mere drudgery.

From the Apocalypse of John
Revelation 21:15-22
Vision of the Holy City
21:15 The angel who talked with me had a measuring rod of gold to measure the city, its gates and its walls. 16 The city was laid out like a square, as long as it was wide. He measured the city with the rod and found it to be 12,000 stadia in length, and as wide and high as it is long. 17 The angel measured the wall using human measurement, and it was 144 cubits thick. 18 The wall was made of jasper, and the city of pure gold, as pure as glass. 19 The foundations of the city walls were decorated with every kind of precious stone. The first foundation was jasper, the second sapphire, the third agate, the fourth emerald, 20 the fifth onyx, the sixth ruby, the seventh chrysolite, the eighth beryl, the ninth topaz, the tenth turquoise, the eleventh jacinth, and the twelfth amethyst. 21 The twelve gates were twelve pearls, each gate made of a single pearl. The great street of the city was of gold, as pure as transparent glass.

22 I did not see a temple in the city, because the Lord God Almighty and the Lamb are its temple.

Commentary
A new heaven, and new earth: the new Jerusalem where God dwells, and banishes all sorrow from his people (vv. 5-8); Its heavenly origin, glory, and secure defense (vv. 9-21).

The street of the city was pure gold, like transparent glass. The saints in heaven tread gold under foot. The saints are there at rest, yet it is not a state of sleep and idleness; they have communion, not only with God, but with one another. All these glories but faintly represent heaven.