Our Daily Bread — Monkeying with the Cosmos 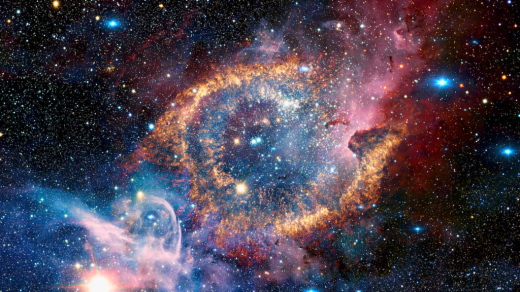 Monkeying with the Cosmos

He existed before anything else, and he holds all creation together. Colossians 1:17 nlt

In the early 1980s, a prominent astronomer who didn’t believe in God wrote, “A common sense interpretation of the facts suggests that a super-intellect has monkeyed with physics, as well as with chemistry and biology.” To this scientist’s eye, the evidence showed that something had designed everything we observe in the cosmos. He added, “There are no blind forces worth speaking about in nature.” In other words, everything we see looks as if it was planned by Someone. And yet, the astronomer remained an atheist.

Three thousand years ago, another intelligent man looked at the skies and drew a different conclusion. “When I consider your heavens, the work of your fingers, the moon and the stars, which you have set in place, what is mankind that you are mindful of them, human beings that you care for them?” wondered David (Psalm 8:3–4).

Yet God cares for us deeply. The universe tells the story of its Intelligent Designer, the “Super Intellect” who made our minds and put us here to ponder His work. Through Jesus and His creation, God can be known. Paul wrote, “[Christ] existed before anything was created and is supreme over all creation, for through him God created everything in the heavenly realms and on earth” (Colossians 1:15–16 nlt).

The cosmos has indeed been “monkeyed with.” The identity of the Intelligent Designer is there to be discovered by anyone willing to seek.

In what ways can you see God in every detail of your life? How might you humbly share your confidence in God with someone who doubts His existence?

Thank You, heavenly Father, that You can be known through Your creation. I pray for those who don’t see You. Please draw them to You.

SCRIPTURE INSIGHT
In important ways, Paul’s letter to the Colossians parallels John’s New Testament gospel. Both describe Christ as the Creator of the universe (John 1:1–3; Colossians 1:13,16–17). Both also show how Jesus came to earth as a servant-king who sacrificed Himself to lead a very different kind of kingdom (John 18:33–37; Colossians 1:9–14).

In the glory days of Rome, Caesar built his empire by the sword and by bribery. It was created on the backs of slave labor and for material glory; he offered wealth and freedom to his friends and serious trouble for those who challenged him. Confessing allegiance to anyone else could get a person beheaded or crucified. Yet that’s the risk John and Paul took and urged others to take. They gave believers in Jesus reason to confess Him as Lord and to model all relationships around the servant example of His Spirit and kingdom (Colossians 3:12–25).