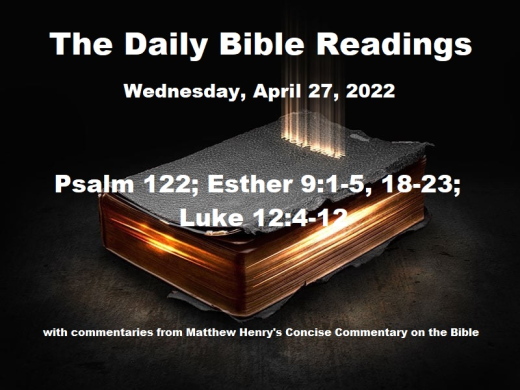 For the Son of Man came to seek and to save the lost.

The Lord does not merely provide us with an example of godly living, but makes it possible for us to enjoy an intimate relationship with Himself. All of us “have sinned and fall short of the glory of God” (Rom. 3:23), which means that we are all lost. Yet Christ came to earth to save us (John 3:16–18). He did for us what we could never do on our own (Rom. 5:1, 2).

Today’s Lectionary Readings:
From the Psalter
Psalm 122
Peace in Jerusalem
1 I rejoiced with those who said to me,
“Let us go to the house of the Lord.”
2 Our feet are standing
in your gates, Jerusalem.

3 Jerusalem is built like a city
that is closely compacted together.
4 That is where the tribes go up—
the tribes of the Lord—
to praise the name of the Lord
according to the statute given to Israel.
5 There stand the thrones for judgment,
the thrones of the house of David.

Verses 1-5: The pleasure and profit from means of grace, should make us disregard trouble and fatigue in going to them; and we should quicken one another to what is good. We should desire our Christian friends, when they have any good work in hand, to call for us, and take us with them. With what readiness should we think of the heavenly Jerusalem! How cheerfully should we bear the cross and welcome death, in hopes of a crown of glory! Jerusalem is called the beautiful city. It was a type of the gospel church, which is compact together in holy love and Christian communion, so that it is all as one city. If all the disciples of Christ were of one mind, and kept the unity of the Spirit in the bond of peace, their enemies would be deprived of their chief advantages against them. But Satan's maxim always has been, to divide that he may conquer; and few Christians are sufficiently aware of his designs.

Verses 6-9: Those who can do nothing else for the peace of Jerusalem, may pray for it. Let us consider all who seek the glory of the Redeemer, as our brethren and fellow-travelers, without regarding differences which do not affect our eternal welfare. Blessed Spirit of peace and love, who didst dwell in the soul of the holy Jesus, descend into his church, and fill those who compose it with his heavenly tempers; cause bitter contentions to cease, and make us to be of one mind. Love of the brethren and love to God, ought to stir us up to seek to be like the Lord Jesus in fervent prayer and unwearied labor, for the salvation of men, and the Divine glory.

From the Historical Books
Esther 9:1-5, 18-23
Purim Celebrates Victory
9:1 On the thirteenth day of the twelfth month, the month of Adar, the edict commanded by the king was to be carried out. On this day the enemies of the Jews had hoped to overpower them, but now the tables were turned and the Jews got the upper hand over those who hated them. 2 The Jews assembled in their cities in all the provinces of King Xerxes to attack those determined to destroy them. No one could stand against them, because the people of all the other nationalities were afraid of them. 3 And all the nobles of the provinces, the satraps, the governors and the king’s administrators helped the Jews, because fear of Mordecai had seized them. 4 Mordecai was prominent in the palace; his reputation spread throughout the provinces, and he became more and more powerful.

5 The Jews struck down all their enemies with the sword, killing and destroying them, and they did what they pleased to those who hated them.

18 The Jews in Susa, however, had assembled on the thirteenth and fourteenth, and then on the fifteenth they rested and made it a day of feasting and joy.

19 That is why rural Jews—those living in villages—observe the fourteenth of the month of Adar as a day of joy and feasting, a day for giving presents to each other.

20 Mordecai recorded these events, and he sent letters to all the Jews throughout the provinces of King Xerxes, near and far, 21 to have them celebrate annually the fourteenth and fifteenth days of the month of Adar 22 as the time when the Jews got relief from their enemies, and as the month when their sorrow was turned into joy and their mourning into a day of celebration. He wrote them to observe the days as days of feasting and joy and giving presents of food to one another and gifts to the poor.

23 So the Jews agreed to continue the celebration they had begun, doing what Mordecai had written to them.

Verses 1-19: The enemies of the Jews hoped to have power over them by the former edict. If they had attempted nothing against the people of God, they would not themselves have suffered. The Jews, acting together, strengthened one another. Let us learn to stand fast in one spirit, and with one mind, striving together against the enemies of our souls, who endeavor to rob us of our faith, which is more precious than our lives. The Jews, to the honor of their religion, showed contempt of wordly wealth, that they might make it appear they desired nothing except their own preservation. In every case the people of God should manifest humanity and disinterestedness, frequently refusing advantages which might lawfully be obtained. The Jews celebrated their festival the day after they had finished their work. When we have received great mercies from God, we ought to be speedy in making thankful returns to him.

Verses 20-23: The observance of the Jewish feasts, is a public declaration of the truth of the Old Testament Scriptures. And as the Old Testament Scriptures are true, the Messiah expected by the Jews is come long ago; and none but Jesus of Nazareth can be that Messiah. The festival was appointed by authority, yet under the direction of the Spirit of God. It was called the feast of Purim, from a Persian word, which signifies a lot. The name of this festival would remind them of the almighty power of the God of Israel, who served his own purposes by the superstitions of the heathen.

From the Gospels
Luke 12:4-12
The Courage to Confess Christ
12:4 “I tell you, my friends, do not be afraid of those who kill the body and after that can do no more. 5 But I will show you whom you should fear: Fear him who, after your body has been killed, has authority to throw you into hell. Yes, I tell you, fear him. 6 Are not five sparrows sold for two pennies? Yet not one of them is forgotten by God. 7 Indeed, the very hairs of your head are all numbered. Don’t be afraid; you are worth more than many sparrows.

8 “I tell you, whoever publicly acknowledges me before others, the Son of Man will also acknowledge before the angels of God. 9 But whoever disowns me before others will be disowned before the angels of God. 10 And everyone who speaks a word against the Son of Man will be forgiven, but anyone who blasphemes against the Holy Spirit will not be forgiven.

11 “When you are brought before synagogues, rulers and authorities, do not worry about how you will defend yourselves or what you will say, 12 for the Holy Spirit will teach you at that time what you should say.”

Commentary
Christ reproves the interpreters of the law.

A firm belief of the doctrine of God's universal providence, and the extent of it, would satisfy us when in peril, and encourage us to trust God in the way of duty. Providence takes notice of the meanest creatures, even of the sparrows, and therefore of the smallest interests of the disciples of Christ. Those who confess Christ now, shall be owned by him in the great day, before the angels of God. To deter us from denying Christ, and deserting his truths and ways, we are here assured that those who deny Christ, though they may thus save life itself, and though they may gain a kingdom by it, will be great losers at last; for Christ will not know them, will not own them, nor show them favor. But let no trembling, penitent backslider doubt of obtaining forgiveness. This is far different from the determined enmity that is blasphemy against the Holy Ghost, which shall never be forgiven, because it will never be repented of.