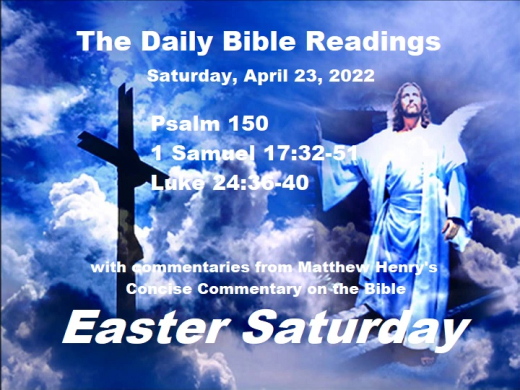 It is written: “‘As surely as I live,’ says the Lord, ‘every knee will bow before me; every tongue will acknowledge God.’”

One day, every knee shall bow and every tongue confess that Jesus is Lord (Rom. 14:11; Phil. 2:10). Some will prostrate themselves willingly before Him out of love, joy, worship, and respect. Others will bend their knee to Him out of dread. But everyone will bow.

Commentary
A psalm of praise.

We are here stirred up to praise God. Praise God for his sanctuary, and the privileges we enjoy by having it among us; praise him because of his power and glory in the firmament. Those who praise the Lord in heaven, behold displays of his power and glory which we cannot now conceive. But the greatest of all his mighty acts is known in his earthly sanctuary. The holiness and the love of our God are more displayed in man's redemption, than in all his other works. Let us praise our God and Savior for it. We need not care to know what instruments of music are mentioned. Hereby is meant that in serving God we should spare no cost or pains. Praise God with strong faith; praise him with holy love and delight; praise him with entire confidence in Christ; praise him with believing triumph over the powers of darkness; praise him by universal respect to all his commands; praise him by cheerful submission to all his disposals; praise him by rejoicing in his love, and comforting ourselves in his goodness; praise him by promoting the interests of the kingdom of his grace; praise him by lively hope and expectation of the kingdom of his glory. Since we must shortly breathe our last, while we have breath let us praise the Lord; then we shall breathe our last with comfort. Let every thing that hath breath praise the Lord. Praise ye the Lord. Such is the very suitable end of a book inspired by the Spirit of God, written for the work of praise; a book which has supplied the songs of the church for more than three thousand years; a book which is quoted more frequently than any other by Christ and his apostles; a book which presents the loftiest ideas of God and his government, which is fitted to every state of human life, which sets forth every state of religious experience, and which bears simple and clear marks of its Divine origin.

From the Historical Books
1 Samuel 17:32-51
David Conquers Goliath
17:32 David said to Saul, “Let no one lose heart on account of this Philistine; your servant will go and fight him.”

33 Saul replied, “You are not able to go out against this Philistine and fight him; you are only a young man, and he has been a warrior from his youth.”

34 But David said to Saul, “Your servant has been keeping his father’s sheep. When a lion or a bear came and carried off a sheep from the flock, 35 I went after it, struck it and rescued the sheep from its mouth. When it turned on me, I seized it by its hair, struck it and killed it. 36 Your servant has killed both the lion and the bear; this uncircumcised Philistine will be like one of them, because he has defied the armies of the living God. 37 The Lord who rescued me from the paw of the lion and the paw of the bear will rescue me from the hand of this Philistine.”

Saul said to David, “Go, and the Lord be with you.”

38 Then Saul dressed David in his own tunic. He put a coat of armor on him and a bronze helmet on his head. 39 David fastened on his sword over the tunic and tried walking around, because he was not used to them.

“I cannot go in these,” he said to Saul, “because I am not used to them.” So he took them off. 40 Then he took his staff in his hand, chose five smooth stones from the stream, put them in the pouch of his shepherd’s bag and, with his sling in his hand, approached the Philistine.

41 Meanwhile, the Philistine, with his shield bearer in front of him, kept coming closer to David. 42 He looked David over and saw that he was little more than a boy, glowing with health and handsome, and he despised him. 43 He said to David, “Am I a dog, that you come at me with sticks?” And the Philistine cursed David by his gods. 44 “Come here,” he said, “and I’ll give your flesh to the birds and the wild animals!”

45 David said to the Philistine, “You come against me with sword and spear and javelin, but I come against you in the name of the Lord Almighty, the God of the armies of Israel, whom you have defied. 46 This day the Lord will deliver you into my hands, and I’ll strike you down and cut off your head. This very day I will give the carcasses of the Philistine army to the birds and the wild animals, and the whole world will know that there is a God in Israel. 47 All those gathered here will know that it is not by sword or spear that the Lord saves; for the battle is the Lord’s, and he will give all of you into our hands.”

48 As the Philistine moved closer to attack him, David ran quickly toward the battle line to meet him. 49 Reaching into his bag and taking out a stone, he slung it and struck the Philistine on the forehead. The stone sank into his forehead, and he fell facedown on the ground.

51 David ran and stood over him. He took hold of the Philistine’s sword and drew it from the sheath. After he killed him, he cut off his head with the sword.

When the Philistines saw that their hero was dead, they turned and ran.

Verses 32-39: A shepherd lad, come the same morning from keeping sheep, had more courage than all the mighty men of Israel. Thus God often sends good words to his Israel, and does great things for them, by the weak and foolish things of the world. As he had answered his brother's passion with meekness, so David answered Saul's fear with faith. When David kept sheep, he proved himself very careful and tender of his flock. This reminds us of Christ, the good Shepherd, who not only ventured, but laid down his life for the sheep. Our experience ought to encourage us to trust in God, and be bold in the way of duty. He that has delivered, does and will continue to do so. David gained leave to fight the Philistine. Not being used to such armor as Saul put upon him, he was not satisfied to go in that manner; this was from the Lord, that it might more plainly appear he fought and conquered in faith, and that the victory was from Him who works by the feeblest and most despised means and instruments. It is not to be inquired how excellent any thing is, but how proper. Let Saul's coat be ever so rich, and his armor ever so strong, what is David the better if they fit him not? But faith, prayer, truth, and righteousness; the whole armor of God, and the mind that was in Christ; are equally needful for all the servants of the Lord, whatever may be their work.

Verses 40-47: The security and presumption of fools destroy them. Nothing can excel the humility, faith, and piety which appear in David's words. He expressed his assured expectation of success; he gloried in his mean appearance and arms, that the victory might be ascribed to the Lord alone.

Verses 48-51: See how frail and uncertain life is, even when a man thinks himself best fortified; how quickly, how easily, and by how small a matter, the passage may be opened for life to go out, and death to enter! Let not the strong man glory in his strength, nor the armed man in his armor. God resists the proud, and pours contempt on those who defy him and his people. No one ever hardened his heart against God and prospered. The history is recorded, that all may exert themselves for the honor of God, and the support of his cause, with bold and unshaken reliance on him. There is one conflict in which all the followers of the Lamb are, and must be engaged; one enemy, more formidable than Goliath, still challenges the armies of Israel. But "resist the devil, and he will flee from you." Go forth to battle with the faith of David, and the powers of darkness shall not stand against you. But how often is the Christian foiled through an evil heart of unbelief!

From the Gospels
Luke 24:36-40
Beholding the Wounds of the Risen Christ
24:36 While they were still talking about this, Jesus himself stood among them and said to them, “Peace be with you.”

37 They were startled and frightened, thinking they saw a ghost. 38 He said to them, “Why are you troubled, and why do doubts rise in your minds? 39 Look at my hands and my feet. It is I myself! Touch me and see; a ghost does not have flesh and bones, as you see I have.”

40 When he had said this, he showed them his hands and feet.

Commentary
Christ appears to the other disciples.

Jesus appeared in a miraculous manner, assuring the disciples of his peace, though they had so lately forsaken him, and promising spiritual peace with every blessing. Many troublesome thoughts which disquiet our minds, rise from mistakes concerning Christ. All the troublesome thoughts which rise in our hearts at any time, are known to the Lord Jesus, and are displeasing to him. He spake with them on their unreasonable unbelief. Nothing had passed but what was foretold by the prophets, and necessary for the salvation of sinners. And now all men should be taught the nature and necessity of repentance, in order to the forgiveness of their sins. And these blessings were to be sought for, by faith in the name of Jesus. Christ by his Spirit works on the minds of men. Even good men need to have their understandings opened. But that we may have right thoughts of Christ, there needs no more than to be made to understand the Scriptures.