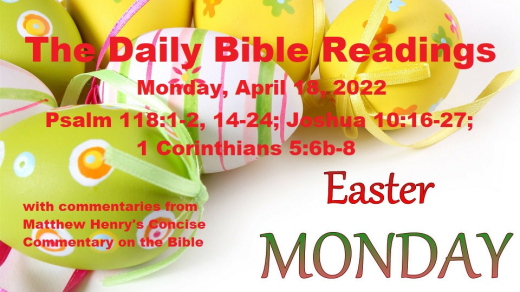 Salvation can only come through faith in Jesus Christ. You confess it with your mouth to put your faith into action and to affirm that you are accountable to Jesus Christ, who is now your Lord. You also believe in your heart that He has triumphed over death. This means He not only has the ability to save you, but He has the authority to lead you and the wisdom to transform you.

Today’s Lectionary Readings:
From the Psalter
Psalm 118:1-2, 14-24
On This Day God Has Acted
1 Give thanks to the Lord, for he is good;
his love endures forever.

14 The Lord is my strength and my defense;
he has become my salvation.

22 The stone the builders rejected
has become the cornerstone;
23 the Lord has done this,
and it is marvelous in our eyes.
24 The Lord has done it this very day;
let us rejoice today and be glad.

Commentary
The coming of Christ in his kingdom.

Those who saw Christ's day at so great a distance, saw cause to praise God for the prospect. The prophecy, verses 22,23, may refer to David's preferment; but principally to Christ. 1. His humiliation; he is the Stone which the builders refused: they would go on in their building without him. This proved the ruin of those who thus made light of him. Rejecters of Christ are rejected of God. 2. His exaltation; he is the chief Cornerstone in the foundation. He is the chief Top-stone, in whom the building is completed, who must, in all things, have the pre-eminence. Christ's name is Wonderful; and the redemption he wrought out is the most amazing of all God's wondrous works. We will rejoice and be glad in the Lord's day; not only that such a day is appointed, but in the occasion of it, Christ's becoming the Head. Sabbath days ought to be rejoicing days, then they are to us as the days of heaven. Let this Savior be my Savior, my Ruler. Let my soul prosper and be in health, in that peace and righteousness which his government brings. Let me have victory over the lusts that war against my soul; and let Divine grace subdue my heart. The duty which the Lord has made, brings light with it, true light. The duty this privilege calls for, is here set forth; the sacrifices we are to offer to God in gratitude for redeeming love, are ourselves; not to be slain upon the altar, but living sacrifices, to be bound to the altar; spiritual sacrifices of prayer and praise, in which our hearts must be engaged. The psalmist praises God, and calls upon all about him to give thanks to God for the glad tidings of great joy to all people, that there is a Redeemer, even Christ the Lord. In him the covenant of grace is made sure and everlasting.

From the Historical Books
Joshua 10:16-27
Joshua Defeats Five Kings
10:16 Now the five kings had fled and hidden in the cave at Makkedah. 17 When Joshua was told that the five kings had been found hiding in the cave at Makkedah, 18 he said, “Roll large rocks up to the mouth of the cave, and post some men there to guard it. 19 But don’t stop; pursue your enemies! Attack them from the rear and don’t let them reach their cities, for the Lord your God has given them into your hand.”

20 So Joshua and the Israelites defeated them completely, but a few survivors managed to reach their fortified cities. 21 The whole army then returned safely to Joshua in the camp at Makkedah, and no one uttered a word against the Israelites.

22 Joshua said, “Open the mouth of the cave and bring those five kings out to me.” 23 So they brought the five kings out of the cave—the kings of Jerusalem, Hebron, Jarmuth, Lachish and Eglon. 24 When they had brought these kings to Joshua, he summoned all the men of Israel and said to the army commanders who had come with him, “Come here and put your feet on the necks of these kings.” So they came forward and placed their feet on their necks.

25 Joshua said to them, “Do not be afraid; do not be discouraged. Be strong and courageous. This is what the Lord will do to all the enemies you are going to fight.” 26 Then Joshua put the kings to death and exposed their bodies on five poles, and they were left hanging on the poles until evening.

27 At sunset Joshua gave the order and they took them down from the poles and threw them into the cave where they had been hiding. At the mouth of the cave they placed large rocks, which are there to this day.

Commentary
The kings are taken, their armies defeated, and they are put to death.

None moved his tongue against any of the children of Israel. This shows their perfect safety. The kings were called to an account, as rebels against the Israel of God. Refuges of lies will but secure for God's judgment. God punished the abominable wickedness of these kings, the measure of whose iniquity was now full. And by this public act of justice, done upon these ringleaders of the Canaanites in sin, he would possess his people with the greater dread and detestation of the sins of the nations that God cast out from before them. Here is a type and figure of Christ's victories over the powers of darkness, and of believers' victories through him. In our spiritual conflicts we must not be satisfied with obtaining some important victory. We must pursue our scattered enemies, searching out the remains of sin as they rise up in our hearts, and thus pursue the conquest. In so doing, the Lord will afford light until the warfare be accomplished.

From the Epistles
1 Corinthians 5:6b-8
Celebrating with Sincerity and Truth
5:6b Don’t you know that a little yeast leavens the whole batch of dough? 7 Get rid of the old yeast, so that you may be a new unleavened batch—as you really are. For Christ, our Passover lamb, has been sacrificed. 8 Therefore let us keep the Festival, not with the old bread leavened with malice and wickedness, but with the unleavened bread of sincerity and truth.

Commentary
The apostle blames the Corinthians for connivance at an incestuous person.

The apostle notices a flagrant abuse, winked at by the Corinthians. Party spirit, and a false notion of Christian liberty, seem to have saved the offender from censure. Grievous indeed is it that crimes should sometimes be committed by professors of the gospel, of which even heathens would be ashamed. Spiritual pride and false doctrines tend to bring in, and to spread such scandals. How dreadful the effects of sin! The devil reigns where Christ does not. And a man is in his kingdom, and under his power, when not in Christ. The bad example of a man of influence is very mischievous; it spreads far and wide. Corrupt principles and examples, if not corrected, would hurt the whole church. Believers must have new hearts, and lead new lives. Their common conversation and religious deeds must be holy. So far is the sacrifice of Christ our Passover for us, from rendering personal and public holiness unnecessary, that it furnishes powerful reasons and motives for it. Without holiness we can neither live by faith in him, nor join in his ordinances with comfort and profit.