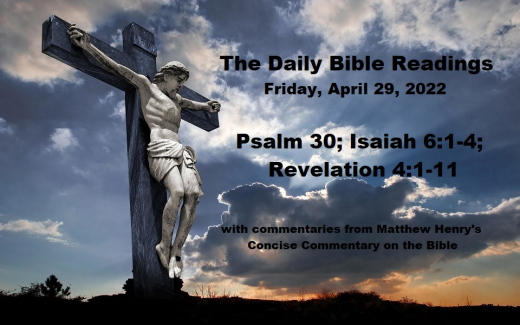 I know that my redeemer lives, and that in the end he will stand on the earth.

Job is a stark biblical example of a fact we need to understand: even those who are right with God will suffer. Will we allow the suffering to tear down our faith or build it up? These are our only choices. Job chose to trust God, his Redeemer, and he was rewarded for his faith (Job 19:25, 26; 42:1–6, 10–17).

Today’s Lectionary Readings:
From the Psalter
Psalm 30
My Wailing Turns to Dancing
1 I will exalt you, Lord,
for you lifted me out of the depths
and did not let my enemies gloat over me.
2 Lord my God, I called to you for help,
and you healed me.
3 You, Lord, brought me up from the realm of the dead;
you spared me from going down to the pit.

4 Sing the praises of the Lord, you his faithful people;
praise his holy name.
5 For his anger lasts only a moment,
but his favor lasts a lifetime;
weeping may stay for the night,
but rejoicing comes in the morning.

6 When I felt secure, I said,
“I will never be shaken.”
7 Lord, when you favored me,
you made my royal mountain stand firm;
but when you hid your face,
I was dismayed.

8 To you, Lord, I called;
to the Lord I cried for mercy:
9 “What is gained if I am silenced,
if I go down to the pit?
Will the dust praise you?
Will it proclaim your faithfulness?
10 Hear, Lord, and be merciful to me;
Lord, be my help.”

11 You turned my wailing into dancing;
you removed my sackcloth and clothed me with joy,
12 that my heart may sing your praises and not be silent.
Lord my God, I will praise you forever.

Verses 1-5: The great things the Lord has done for us, both by his providence and by his grace, bind us in gratitude to do all we can to advance his kingdom among men, though the most we can do is but little. God's saints in heaven sing to him; why should not those on earth do the same? Not one of all God's perfections carries in it more terror to the wicked, or more comfort to the godly, than his holiness. It is a good sign that we are in some measure partakers of his holiness, if we can heartily rejoice at the remembrance of it. Our happiness is bound up in the Divine favor; if we have that, we have enough, whatever else we want; but as long as God's anger continues, so long the saints' weeping continues.

Verses 6-12: When things are well with us, we are very apt to think that they will always be so. When we see our mistake, it becomes us to think with shame upon our carnal security as our folly. If God hide his face, a good man is troubled, though no other calamity befall him. But if God, in wisdom and justice, turn from us, it will be the greatest folly if we turn from him. No; let us learn to pray in the dark. The sanctified spirit, which returns to God, shall praise him, shall be still praising him; but the services of God's house cannot be performed by the dust; it cannot praise him; there is none of that device or working in the grave, for it is the land of silence. We ask aright for life, when we do so that we may live to praise him. In due time God delivered the psalmist out of his troubles. Our tongue is our glory, and never more so than when employed in praising God. He would persevere to the end in praise, hoping that he should shortly be where this would be the everlasting work. But let all beware of carnal security. Neither outward prosperity, nor inward peace, here, are sure and lasting. The Lord, in his favor, has fixed the believer's safety firm as the deep-rooted mountains, but he must expect to meet with temptations and afflictions. When we grow careless, we fall into sin, the Lord hides his face, our comforts droop, and troubles assail us.

From the Prophetic Books of Major Prophets
Isaiah 6:1-4
Heaven’s Holy Holy Holy
6:1 In the year that King Uzziah died, I saw the Lord, high and exalted, seated on a throne; and the train of his robe filled the temple. 2 Above him were seraphim, each with six wings: With two wings they covered their faces, with two they covered their feet, and with two they were flying. 3 And they were calling to one another:

“Holy, holy, holy is the Lord Almighty;
the whole earth is full of his glory.”

4 At the sound of their voices the doorposts and thresholds shook and the temple was filled with smoke.

Commentary
The vision which Isaiah beheld in the temple.

In this figurative vision, the temple is thrown open to view, even to the most holy place. The prophet, standing outside the temple, sees the Divine Presence seated on the mercy-seat, raised over the ark of the covenant, between the cherubim and seraphim, and the Divine glory filled the whole temple. See God upon his throne. This vision is explained (John 12:41), that Isaiah now saw Christ's glory, and spake of Him, which is a full proof that our Savior is God. In Christ Jesus, God is seated on a throne of grace; and through him the way into the holiest is laid open. See God's temple, his church on earth, filled with his glory. His train, the skirts of his robes, filled the temple, the whole world, for it is all God's temple. And yet he dwells in every contrite heart. See the blessed attendants by whom his government is served. Above the throne stood the holy angels, called seraphim, which means "burners;" they burn in love to God, and zeal for his glory against sin. The seraphim showing their faces veiled, declares that they are ready to yield obedience to all God's commands, though they do not understand the secret reasons of his counsels, government, or promises. All vain-glory, ambition, ignorance, and pride, would be done away by one view of Christ in his glory.

From the Apocalypse of John
Revelation 4:1-11
Heaven’s Holy Holy Holy
4:1 After this I looked, and there before me was a door standing open in heaven. And the voice I had first heard speaking to me like a trumpet said, “Come up here, and I will show you what must take place after this.” 2 At once I was in the Spirit, and there before me was a throne in heaven with someone sitting on it. 3 And the one who sat there had the appearance of jasper and ruby. A rainbow that shone like an emerald encircled the throne. 4 Surrounding the throne were twenty-four other thrones, and seated on them were twenty-four elders. They were dressed in white and had crowns of gold on their heads. 5 From the throne came flashes of lightning, rumblings and peals of thunder. In front of the throne, seven lamps were blazing. These are the seven spirits of God. 6 Also in front of the throne there was what looked like a sea of glass, clear as crystal.

is the Lord God Almighty,’

11 “You are worthy, our Lord and God,
to receive glory and honor and power,
for you created all things,
and by your will they were created
and have their being.”

Commentary
A vision of God, as on his glorious throne, around which were twenty-four elders and four living creatures (vv. 1-8); Whose songs, and those of the holy angels, the apostle heard (vv. 9-11).

Verses 1-8: After the Lord Jesus had instructed the apostle to write to the churches "the things that are," there was another vision. The apostle saw a throne set in heaven, an emblem of the universal dominion of Jehovah. He saw a glorious One upon the throne, not described by human features, so as to be represented by a likeness or image, but only by his surpassing brightness. These seem emblems of the excellence of the Divine nature, and of God's awful justice. The rainbow is a fit emblem of that covenant of promise which God has made with Christ, as the Head of the church, and with all his people in him. The prevailing color was a pleasant green, showing the reviving and refreshing nature of the new covenant. Four-and-twenty seats around the throne, were filled with four-and-twenty elders, representing, probably, the whole church of God. Their sitting denotes honor, rest, and satisfaction; their sitting about the throne signifies nearness to God, the sight and enjoyment they have of him. They were clothed in white raiment; the imputed righteousness of the saints and their holiness: they had on their heads crowns of gold, signifying the glory they have with him. Lightnings and voices came from the throne; the awful declarations God makes to his church, of his sovereign will and pleasure. Seven lamps of fire were burning before the throne; the gifts, graces, and operations of the Spirit of God in the churches of Christ, dispensed according to the will and pleasure of Him who sits upon the throne. In the gospel church, the laver for purification is the blood of the Lord Jesus Christ, which cleanses from all sin. In this all must be washed, to be admitted into the gracious presence of God on earth, and his glorious presence in heaven. The apostle saw four living creatures, between the throne and the circle of the elders, standing between God and the people. These seem to signify the true ministers of the gospel, because of their place between God and the people. This also is shown by the description given, denoting wisdom, courage, diligence, and discretion, and the affections by which they mount up toward heaven.

Verses 9-11: All true believers wholly ascribe their redemption and conversion, their present privileges and future hopes, to the eternal and most holy God. Thus rise the for-ever harmonious, thankful songs of the redeemed in heaven. Would we on earth do like them, let our praises be constant, not interrupted; united, not divided; thankful, not cold and formal; humble, not self-confident.