Our Daily Bread — Pulled to Safety 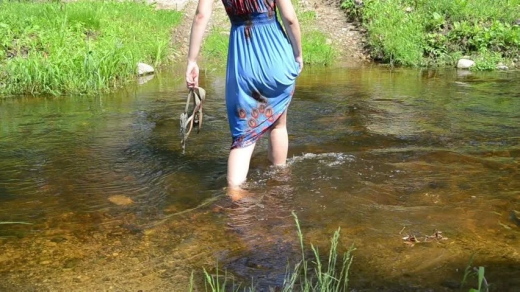 A little girl waded in a shallow creek while her father watched. Her rubber boots reached her knees. As she sloshed downstream, the water deepened until it flowed over the top of her waders. When she couldn’t take another step, she yelled, “Daddy, I’m stuck!” In three strides, her father was at her side, pulling her to the grassy bank. She yanked her boots off and laughed as water poured onto the ground.

After God rescued the psalmist David from his enemies, he took a moment to sit down, “pull off his boots,” and allow the relief to flood his soul. He wrote a song to express his feelings. “I called to the Lord, who is worthy of praise, and have been saved from my enemies,” he said (2 Samuel 22:4). He praised God as his rock, fortress, shield, and stronghold (vv. 2–3), and then went on to narrate a poetic response of God’s response: The earth trembled. God came down from heaven. Lightning bolts flew from His presence. His voice thundered, and He drew him out of deep water (vv. 8, 10, 13–15, 17).

Maybe today you feel opposition around you. Maybe you’re stuck in sin that makes it hard to advance spiritually. Reflect on how God has helped you in the past, and then praise Him and ask Him to do it again! Thank Him especially for rescuing you by bringing you into His kingdom (Colossians 1:13).

Why is it easy to overlook the good things God’s done for you in the past when you’re in the midst of trouble? How does praising God increase your faith in Him?

Dear heavenly Father, thank You for coming to my aid so many times. Help me to know I can face any battle with You by my side.

SCRIPTURE INSIGHT
Second Samuel 22:13–20 is a small portion of a larger song, or psalm, of David (vv. 2–51) that corresponds to the fifty verses of Psalm 18. In both, the sense is basically the same; only the wording differs slightly.

In this song of thanksgiving, David begins with a lengthy introduction detailing his past distress (including threats to his life). The psalmist then calls on “the Lord” (2 Samuel 22:7). The Lord appears in a theophany (a visible manifestation of God) in verses 8–16. God’s sudden appearance and actions are described in terms of what might be an erupting volcano with lightning and thunder or a similar catastrophe that results in a violent earthquake. The Lord swoops in as a mighty warrior. And in verses 17–20, David describes his deliverance, concluding with the words: “He rescued me because he delighted in me” (v. 20).