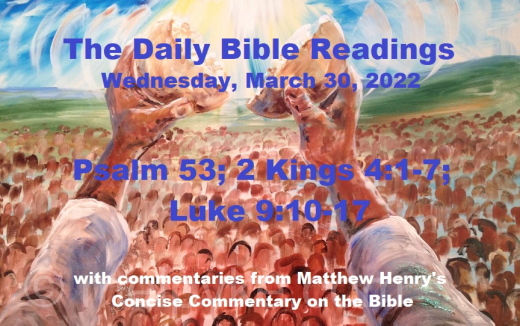 Restoring Our Fortunes (Psalm 53)
The Widow Saved (2 Kings 4:1-7)
Jesus Feeds 5000 (Luke 9:10-17)
Our psalm is arranged for use in music or worship in today’s lectionary readings. It is similar to Psalm 14 and is quoted in part in Romans 3. Here David depicts the human race as evil and incapable of producing any truly good deeds in God’s sight. David, the psalmist, longs for the establishment of God’s kingdom on earth. When the kingdom arrives, there will be great joy.

In the book of Second Kings, Elisha’s prophetic ministry clearly demonstrates that God cares for His people and that He sometimes works in sovereign and mighty ways that extend far beyond what we can do or think as He reaches out to meet needs according to His will. Such was the case with the widow in our passage. She was evidently a believer, and her husband had been a prophet, a man of God who was involved in the ministry and teaching of Elisha.

In our reading in the gospel according to Luke, the feeding of the five thousand, God, in the person of Jesus, takes responsibility for meeting the crowd’s need for food. He does it because they are hungry. Exactly how Jesus works this miracle is not stated. He uses ordinary food—the five loaves of bread and two fish—and by God’s power, a little bit of food becomes enough to feed so many people.

The very focus of the passage in our verse of the day is the beating heart of the gospel of Christ Jesus, Who God sent to be the Messiah of Israel and Savior of the whole world.

He was despised and rejected by mankind, a man of suffering, and familiar with pain. Like one from whom people hide their faces he was despised, and we held him in low esteem. Surely he took up our pain and bore our suffering, yet we considered him punished by God, stricken by him, and afflicted.

Isaiah called the coming Messiah “a man of suffering, and familiar with pain” (Is. 53:3), and in the Garden of Gethsemane, Jesus faced sorrow like He had never known. Truly, He “has been tempted in every way, just as we are—yet he did not sin” (Heb. 4:15). He understands our pain and afflictions, which is why He is our perfect Savior (Heb. 2:14–18).

Today’s Lectionary Readings:
From the Psalter
Psalm 53
Restoring Our Fortunes

1 The fool says in his heart,
“There is no God.”
They are corrupt, and their ways are vile;
there is no one who does good.

2 God looks down from heaven
on all mankind
to see if there are any who understand,
any who seek God.
3 Everyone has turned away, all have become corrupt;
there is no one who does good,
not even one.

They devour my people as though eating bread;
they never call on God.
5 But there they are, overwhelmed with dread,
where there was nothing to dread.
God scattered the bones of those who attacked you;
you put them to shame, for God despised them.

6 Oh, that salvation for Israel would come out of Zion!
When God restores his people,
let Jacob rejoice and Israel be glad!

David complains of the malice of his enemies (vv. 1-3); Assurance of the Divine favor and protection (vv. 4-7).

This psalm is almost the same as the 14th. The scope of it is to convince us of our sins. God, by the psalmist, here shows us how bad we are, and proves this by his own certain knowledge. He speaks terror to persecutors, the worst of sinners. He speaks encouragement to God's persecuted people. How comes it that men are so bad? Because there is no fear of God before their eyes. Men's bad practices flow from their bad principles; if they profess to know God, yet in works, because in thoughts, they deny him. See the folly of sin; he is a fool, in the account of God, whose judgment we are sure is right, that harbors such corrupt thoughts. And see the fruit of sin; to what it brings men, when their hearts are hardened through the deceitfulness of sin. See also the faith of the saints, and their hope and power as to the cure of this great evil. There will come a Savior, a great salvation, a salvation from sin. God will save his church from its enemies. He will save all believers from their own sins, that they may not be led captive by them, which will be everlasting joy to them. From this work the Redeemer had his name JESUS, for he shall save his people from their sins, Matthew 1:21.

From the Historical Books
2 Kings 4:1-7
The Widow Saved

4:1 The wife of a man from the company of the prophets cried out to Elisha, “Your servant my husband is dead, and you know that he revered the Lord. But now his creditor is coming to take my two boys as his slaves.”

2 Elisha replied to her, “How can I help you? Tell me, what do you have in your house?”

“Your servant has nothing there at all,” she said, “except a small jar of olive oil.”

3 Elisha said, “Go around and ask all your neighbors for empty jars. Don’t ask for just a few. 4 Then go inside and shut the door behind you and your sons. Pour oil into all the jars, and as each is filled, put it to one side.”

5 She left him and shut the door behind her and her sons. They brought the jars to her and she kept pouring. 6 When all the jars were full, she said to her son, “Bring me another one.”

But he replied, “There is not a jar left.” Then the oil stopped flowing.

7 She went and told the man of God, and he said, “Go, sell the oil and pay your debts. You and your sons can live on what is left.”

Elisha's miracles were acts of real charity: Christ's were so; not only great wonders, but great favors to those for whom they were wrought. God magnifies his goodness with his power. Elisha readily received a poor widow's complaint. Those that leave their families under a load of debt, know not what trouble they cause. It is the duty of all who profess to follow the Lord, while they trust to God for daily bread, not to tempt him by carelessness or extravagance, nor to contract debts; for nothing tends more to bring reproach upon the gospel, or distresses their families more when they are gone. Elisha put the widow in a way to pay her debt, and to maintain herself and her family. This was done by miracle, but so as to show what is the best method to assist those who are in distress, which is, to help them to improve by their own industry what little they have. The oil, sent by miracle, continued flowing as long as she had empty vessels to receive it. We are never straitened in God, or in the riches of his grace; all our straitness is in ourselves. It is our faith that fails, not his promise. He gives more than we ask: were there more vessels, there is enough in God to fill them; enough for all, enough for each; and the Redeemer's all-sufficiency will only be stayed from the supplying the wants of sinners and saving their souls, when no more apply to him for salvation. The widow must pay her debt with the money she received for her oil. Though her creditors were too hard with her, yet they must be paid, even before she made any provision for her children. It is one of the main laws of the Christian religion, that we pay every just debt, and give every one his own, though we leave ever so little for ourselves; and this, not of constraint, but for conscience' sake. Those who bear an honest mind, cannot with pleasure eat their daily bread, unless it be their own bread. She and her children must live upon the rest; that is, upon the money received for the oil, with which they must put themselves into a way to get an honest livelihood. We cannot now expect miracles, yet we may expect mercies, if we wait on God, and seek to him. Let widows in particular depend upon him. He that has all hearts in his hand, can, without a miracle, send as effectual a supply.

9:10 When the apostles returned, they reported to Jesus what they had done. Then he took them with him and they withdrew by themselves to a town called Bethsaida, 11 but the crowds learned about it and followed him. He welcomed them and spoke to them about the kingdom of God, and healed those who needed healing.

12 Late in the afternoon the Twelve came to him and said, “Send the crowd away so they can go to the surrounding villages and countryside and find food and lodging, because we are in a remote place here.”

13 He replied, “You give them something to eat.”

They answered, “We have only five loaves of bread and two fish—unless we go and buy food for all this crowd.” 14 (About five thousand men were there.)

But he said to his disciples, “Have them sit down in groups of about fifty each.” 15 The disciples did so, and everyone sat down. 16 Taking the five loaves and the two fish and looking up to heaven, he gave thanks and broke them. Then he gave them to the disciples to distribute to the people. 17 They all ate and were satisfied, and the disciples picked up twelve basketfuls of broken pieces that were left over.

The people followed Jesus, and though they came unseasonably, yet he gave them what they came for. He spake unto them of the kingdom of God. He healed those who had need of healing. And with five loaves of bread and two fishes, Christ fed five thousand men. He will not see those that fear him, and serve him faithfully, want any good thing. When we receive creature-comforts, we must acknowledge that we receive them from God, and that we are unworthy to receive them; that we owe them all, and all the comfort we have in them, to the mediation of Christ, by whom the curse is taken away. The blessing of Christ will make a little go a great way. He fills every hungry soul, abundantly satisfies it with the goodness of his house. Here were fragments taken up: in our Father's house there is bread enough, and to spare. We are not straitened, nor stinted in Christ.