Our Daily Bread — Rising to Dance 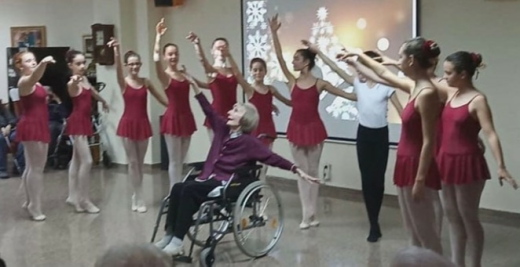 The body that is sown is perishable, it is raised imperishable. 1 Corinthians 15:42

In a widely shared video, an elegant elderly woman sits in a wheelchair. Once a famed ballet dancer, Marta González Saldaña now suffers from Alzheimer’s disease. But something magical happens when Tchaikovsky’s Swan Lake is played to her. As the music builds, her frail hands slowly rise; and as the first trumpets blast, she starts performing from her chair. Though her mind and body are perishing, her talent is still there.

Reflecting on that video, my thoughts went to Paul’s teaching on resurrection in 1 Corinthians 15. Likening our bodies to a seed that is buried before it sprouts into a plant, he says that though our bodies may perish through age or illness, may be a source of dishonor, and may be wracked with weakness, the bodies of believers will be raised imperishable, full of glory and power (vv. 42–44). Just as there is an organic link between the seed and the plant, we will be “us” after our resurrection, our personalities and talents intact, but we will flourish like never before.

When the haunting melody of Swan Lake began to play, Marta at first looked downcast, perhaps mindful of what she once was and could no longer do. But then a man reached over and held her hand. And so it will be for us. Trumpets will blast (v. 52), a hand will reach out, and we’ll rise to dance like never before.

What do you look forward to being able to do after the resurrection? How can this give you hope for loved ones suffering the effects of age?

I praise You, Jesus, that nothing will be lost, but only regained, in the future.

SCRIPTURE INSIGHT
The Bible Knowledge Commentary elaborates on Paul’s teaching in 1 Corinthians 15:35–37 about “how foolish it is” to ask about our resurrection bodies: “Belief in the Resurrection was like belief in seedtime and harvest. Neither could be completely understood but both were real. As a plant which sprouted from a seed was directly linked to it but remarkably different from it, so too was the relationship of a natural and a resurrected body.” Our resurrection body will be so much more than our natural body, which is weak, imperfect, and temporal. Elsewhere Paul states: “Our citizenship is in heaven. And we eagerly await a Savior from there, the Lord Jesus Christ, who … will transform our lowly bodies so that they will be like his glorious body” (Philippians 3:20–21). We will be like Him!
Posted by Kenny at 2:06:00 AM