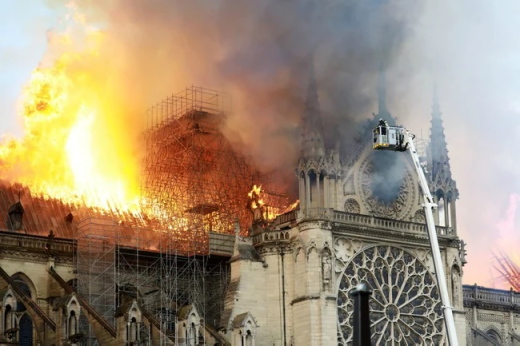 The way of fools seems right to them, but the wise listen to advice. Proverbs 12:15

When the roof of Paris’ Notre-Dame Cathedral caught fire in April 2019, its ancient wood beams and lead sheeting created a furnace so hot it couldn’t be contained. After the cathedral’s spire dramatically fell, attention turned to its bell towers. If the giant steel bells’ wooden frames also burned, their collapse would bring both towers down, leaving the cathedral in ruins.

Pulling his firefighters back for safety, General Gallet, commander of the Paris fire department, pondered what to do next. A firefighter named Remi nervously approached. “Respectfully, General,” he said, “I propose that we run hoses up the exterior of the towers.” Given the building’s fragility the commander dismissed the idea, but Remi spoke on. Soon General Gallet faced a decision: follow the junior firefighter’s advice or leave the cathedral to fall.

Scripture has much to say about taking advice. While this is sometimes in the context of youth respecting elders (Proverbs 6:20–23), most is not. Proverbs says, “the wise listen to advice” (12:15), wars are won with it (24:6), and only a fool fails to heed it (12:15). Wise people listen to good advice, whatever the age or rank of those giving it.

General Gallet listened to Remi. The burning bell frames were hosed down just in time, and the cathedral was saved. What problem do you need godly advice on today? Sometimes God guides the humble through a junior’s lips.

In what situations do you find it difficult to listen to advice? How can you best judge good advice from bad?

Father, by the work of the Holy Spirit, please give me the humility to receive good advice from others.

SCRIPTURE INSIGHT
Solomon, the wisest person in the ancient world, wrote some three thousand proverbs (1 Kings 4:30–34). But the Holy Spirit selected only some of his proverbs (see Proverbs 1:1; 25:1) to be included in the Scriptures, as well as proverbs by unnamed Jewish wise men (22:17–24:34), Agur (ch. 30), and Lemuel (ch. 31). In the first nine chapters of the book of Proverbs, these wise sayings are presented as a life manual from a father to his son (see 1:8; 2:1; 3:1; 4:1; 5:1). The father warns, encourages, and instructs his son to live a God-honoring life. Proverbs 6:20–35 warns of the dangers of sexual temptation and sin. Other warnings against sexual immorality appear in chapters 5 and 7. As a safeguard against sin, Solomon admonished his son to bind his instructions on his heart (6:21). Scripture is “a lamp,” “correction and instruction,” and “the way to life” (v. 23).