The Lord’s Prayer: The Meaning and Power 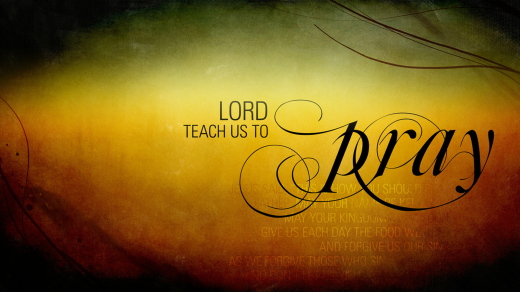 The Lord’s Prayer: The Meaning and Power
In Luke 11, one of Jesus’s disciples approaches and makes a simple request: “Lord, teach us to pray, just as John [the Baptist] taught his disciples” (v. 1). In response, Jesus teaches the disciples what has become known as the Our Father or the Lord’s Prayer. No other prayer is more important to Christians than this prayer. It is the Lord’s prayer—the prayer he taught us to pray. There are a host of other prayers we overhear Jesus praying in the Gospels, and I’ll mention them below. But only with this prayer does Jesus say, “Pray like this.”

Each word is saturated with meaning, a meaning that we often miss when we pray it by rote as we gather in our churches for worship. Each of its six petitions (five given by the Lord, one added by the early church) reflects the major themes from Jesus’s life and ministry. The prayer is meant by Jesus to shape our lives and, through us, to shape and change the world.

Multiple Versions of the Lord’s Prayer?

There are three versions of the Lord’s Prayer that came to us from the earliest period of Christianity. We are most familiar with Matthew’s account, found in the middle of the Sermon on the Mount (Matthew 6:9-13). The English version of that prayer was influenced by William Tyndale’s 1525 translation, which in turn shaped the form of the prayer as it appeared in the sixteenth-century Book of Common Prayer and finally the King James Version of 1611. Tyndale’s version was modified slightly into the version most English-speaking Protestants and Catholics pray today. Let’s look at the King James Version side by side with a modern translation of Matthew’s version of the Lord’s Prayer. Modern versions, in this case, the New International Version, are based upon more reliable Greek versions of Matthew’s Gospel than were available in 1611: 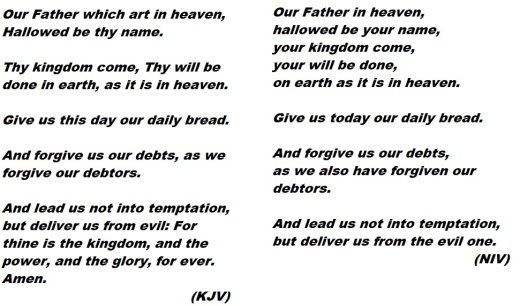 Father,
hallowed be your name,
your kingdom come.
Give us each day our daily bread.
Forgive us our sins,
for we also forgive everyone who sins against us.
And lead us not into temptation.

Notice that neither of these New Testament versions of the prayer, Matthew’s or Luke’s, includes the traditional closing doxology, “For thine is the kingdom, and the power, and the glory, forever. Amen.”

There is a third version of the Lord’s Prayer that comes to us from the early church, in a document called The Didache or The Lord’s Teaching Through the Twelve Apostles to the Gentiles. This is a fascinating document describing the practices of the early church that some scholars believe was written in the first century, and others the second century, offering guidance in the Christian life. In chapter 8 of The Didache we find Matthew’s version of the prayer quoted.

Do not pray as the hypocrites, but as the Lord commanded in his Gospel, pray thus: “Our Father, who art in Heaven, hallowed be thy Name, thy Kingdom come, thy will be done, as in Heaven so also upon earth; give us today our daily bread, and forgive us our debt as we forgive our debtors, and lead us not into trial, but deliver us from the Evil One, for thine is the power and the glory for ever.” Pray thus three times a day.

Note that this version included the doxology. Note, too, the closing words that are in bold, “Pray thus three times a day.” This is a remarkable testimony to the importance of the Lord’s Prayer for early Christians.

Over the years this prayer has come to mean a great deal to me. I pray it and meditate upon its words in my morning walks with my dogs. I pray it at every hospital and nursing home visit I make. I pray it with the dying, and with their friends and family at each funeral or memorial service.

I once visited a veteran in hospice care. Don (not his real name) hadn’t been responsive in hours. His eyes were closed, his breathing had become more labored, and the hospice nurse said that the end was imminent. He had not spoken since the previous day. I pulled up a chair to the bed, gently took his hand in mine, spoke to him, and also to his family sitting around the room. I reminded him of Christ’s love and his promises. I read Scripture to him. And I told him how grateful I was to have been his chaplain. I then took anointing oil and, with my thumb, made the sign of the cross upon his forehead, a reminder that he belonged to Christ. Finally, with each of his loved ones touching him, we prayed, giving thanks to God for Don’s life and entrusting him to God’s care. At the end of this prayer, I said words I had spoken many times before. “Now, let us join together in the prayer that Jesus taught his disciples to pray saying,

Our Father, who art in heaven,
hallowed be thy name.
Thy kingdom come,
thy will be done on earth as it is in heaven.
Give us this day our daily bread.

And forgive us our trespasses,
as we forgive those who trespass against us.
And lead us, not into temptation,
but deliver us from evil.

For thine is the kingdom, and the power, and the glory,
forever and ever. Amen.

As we concluded, one of his children spoke up and said, “Did you all see that?” Another replied, “Yes, I was watching him. He moved his lips, speaking the Lord’s Prayer with us.” It was a holy and beautiful moment. These were the last words Don would attempt to speak before he passed a few minutes later. I’ve seen this happen again and again. Each time it happens, it reminds me of just how important this prayer is to so many. It is deeply embedded in the hearts and minds of most Christians.
Posted by Kenny at 1:33:00 PM