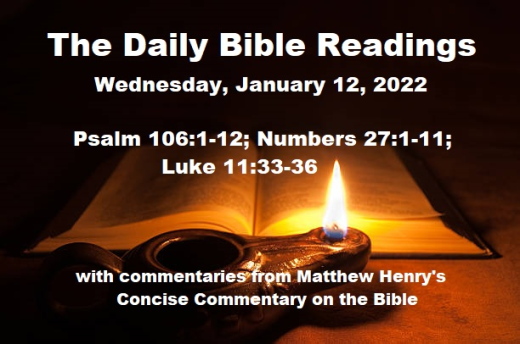 In today’s lectionary readings, our psalm opens with the imperative, “Praise the Lord.” He is deserving of thanksgiving or grateful “acknowledgment,” for he is “good” or “kind,” and his love—compassionate concern or “mercy”—is abiding. Being the ultimate standard of moral excellence, God is good and the source of all good things and his compassionate care can always be relied upon.

Our reading in the fourth book of Moses is the appeal of Zelophehad’s five daughters to Moses concerning their inheritance. Their father had died without any sons, and under the law of the time, his daughters were left without an inheritance. Moses does three remarkable things. He not only hears the appeal of these ladies, he humbly admits that he did not know the answer. He takes it to God, and God not only hears it but also gives the ladies more than what they asked for, as all they had asked for was the land.

Tucked into our reading in the Gospel of Luke is a metaphor of light as being a picture of God. This metaphor of light represents God’s character, Jesus’ ministry, and our mission to point people back to Him. In this reading, we see one reason why He sent Jesus. After seeing God and Jesus, we see a call on our own lives to be lights pointing people to the great light.

Our verse of the day tells Christians in Galatia that they are now sons of God through faith in Jesus Christ, not through the works of the Jewish law. It is directed against the distinction made by the Judaizing teachers between believers who were circumcised and those who were not. The Jews stood in covenant relationship with God before Christ came; the Gentiles did not. Whatever their former condition, now all who trusted in Christ had been brought into a relationship with God far superior even to that of Israel before Christ came. When Christ came, however, the guardian of the law was no longer needed. No matter what the Judaizers said to the Galatian Christians, it was not necessary for any of them to continue following the law’s works. True freedom from sin is now available to those who “by faith” receive the gift of Christ’s death for their sin on the cross.

The last sentence of our verse assures these believers that, in Christ, they have been fully united with everyone else who is in Christ. There are no lesser Christians in the family of God. Our earthly identifiers create no value distinction between us in our Father’s eyes. Jews do not carry a higher rank than Gentiles. Free people hold no greater honor than slaves. Men are not superior to women. No race is a “master race,” nor any ethnicity inferior.

So in Christ Jesus you are all children of God through faith, for all of you who were baptized into Christ have clothed yourselves with Christ. There is neither Jew nor Gentile, neither slave nor free, nor is there male and female, for you are all one in Christ Jesus.

Paul asserted that the ground is level at the foot of the Cross for all people. We all come to Christ as sinners—with the same level of need for salvation. It is only by faith in His grace that we are redeemed. God does not play favorites after we are saved, either—neither by economic or social status, nor by the role we are called to fulfill (Acts 10:34; Rom. 2:11). He makes us into a single unit, the body of Christ, and calls us all to serve Him in obedience.

Give thanks to the Lord, for he is good;
his love endures forever.

2 Who can proclaim the mighty acts of the Lord
or fully declare his praise?
3 Blessed are those who act justly,
who always do what is right.

4 Remember me, Lord, when you show favor to your people,
come to my aid when you save them,
5 that I may enjoy the prosperity of your chosen ones,
that I may share in the joy of your nation
and join your inheritance in giving praise.

6 We have sinned, even as our ancestors did;
we have done wrong and acted wickedly.
7 When our ancestors were in Egypt,
they gave no thought to your miracles;
they did not remember your many kindnesses,
and they rebelled by the sea, the Red Sea.
8 Yet he saved them for his name’s sake,
to make his mighty power known.
9 He rebuked the Red Sea, and it dried up;
he led them through the depths as through a desert.
10 He saved them from the hand of the foe;
from the hand of the enemy he redeemed them.
11 The waters covered their adversaries;
not one of them survived.
12 Then they believed his promises
and sang his praise.

Verses 1-5: None of our sins or sufferings should prevent our ascribing glory and praise to the Lord. The more unworthy we are, the more is his kindness to be admired. And those who depend on the Redeemer's righteousness will endeavor to copy his example, and by word and deed to show forth his praise. God's people have reason to be cheerful people; and need not envy the children of men their pleasure or pride.

Verses 6-12: Here begins a confession of sin; for we must acknowledge that the Lord has done right, and we have done wickedly. We are encouraged to hope that though justly corrected, yet we shall not be utterly forsaken. God's afflicted people own themselves guilty before him. God is distrusted because his favors are not remembered. If he did not save us for his own name's sake, and to the praise of his power and grace, we should all perish.

27:1 The daughters of Zelophehad son of Hepher, the son of Gilead, the son of Makir, the son of Manasseh, belonged to the clans of Manasseh son of Joseph. The names of the daughters were Mahlah, Noah, Hoglah, Milkah and Tirzah. They came forward 2 and stood before Moses, Eleazar the priest, the leaders and the whole assembly at the entrance to the tent of meeting and said, 3 “Our father died in the wilderness. He was not among Korah’s followers, who banded together against the Lord, but he died for his own sin and left no sons. 4 Why should our father’s name disappear from his clan because he had no son? Give us property among our father’s relatives.”

5 So Moses brought their case before the Lord, 6 and the Lord said to him, 7 “What Zelophehad’s daughters are saying is right. You must certainly give them property as an inheritance among their father’s relatives and give their father’s inheritance to them.

The daughters of Zelophehad apply for an inheritance, The law of inheritances.

The five daughters of Zelophehad considered themselves as left destitute, having neither father nor brother to inherit any land. Their believing expectation that the word of the Lord would be performed in due season, and their desire of an interest in the promised inheritance; and the modest, candid manner in which they asked, without secret murmurs or discontents, are a good example. They ask for a possession in the land of Canaan. Herein they discovered, 1. Strong faith in the power and promise of God, concerning the giving of the land of Canaan to Israel. 2. And earnest desire of a place and name in the land of promise, which was a type of heaven. 3. Respect and honor for their father, whose name was dear to them now he was gone. He never had done any thing that might bar his children's claim. It is a comfort to parents when they come to die, if though they have smarted for their own sin, yet they are not conscious of any of those iniquities which God will visit on their children. God himself gives judgment. He takes notice of the affairs, not only of nations, but of private families, and orders them according to his will. The petition is granted. Those who seek an inheritance in the land of promise, shall have what they seek for, and other things shall be added to them.

11:33 “No one lights a lamp and puts it in a place where it will be hidden, or under a bowl. Instead they put it on its stand, so that those who come in may see the light. 34 Your eye is the lamp of your body. When your eyes are healthy, your whole body also is full of light. But when they are unhealthy, your body also is full of darkness. 35 See to it, then, that the light within you is not darkness. 36 Therefore, if your whole body is full of light, and no part of it dark, it will be just as full of light as when a lamp shines its light on you.”

We should pray without ceasing that our hearts and understandings may be opened, that we may profit by the light we enjoy. And especially take heed that the light which is in us be not darkness; for if our leading principles be wrong, our judgment and practice must become more so.