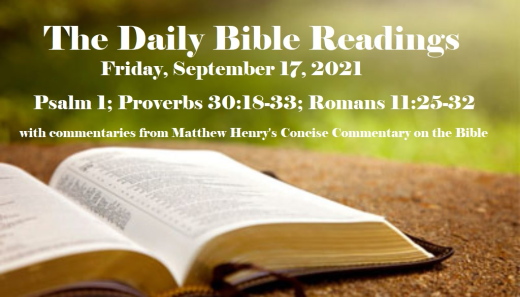 The Daily Bible Readings
Friday, September 17, 2021
Psalm 1; Proverbs 30:18-33; Romans 11:25-32
with commentaries from Matthew Henry's Concise Commentary on the Bible
Introduction
In today’s lectionary readings, the psalmist praises the blessedness of one who avoids the path of the wicked and walks in the way of wisdom and life. Our Proverbs reading is a continuation of the collection of wisdom passages from a man known only to this chapter of the Bible. In our epistle reading, Paul brings to a close his thoughts on the relation between the salvation of Israel and the Gentiles. Israel has been set aside for a time until God has finished his work of saving Gentiles, but will again be saved when the Deliverer, Christ, comes. God’s plan is marvelous and Gentiles should not boast about Israel’s failure because it was a result of Divine hardening. Having set aside Israel, God might fully extend His salvation to the Gentiles. In our verse of the day, Paul reminds us that we are the children of God. We are not just children, we are the beloved children of God. We, as beloved children of God are to imitate Him.
Today’s Verse of the Day:
Ephesians 5:1

If we are the children of God, it only makes sense that we are to follow our Father. And if we refuse to walk in the ways of our heavenly Father, there is biblical reason to wonder who our father really is (1 John 3:10).
Today’s Lectionary Readings:
From the Psalter
Psalm 1
Delight in God’s Law
1 Blessed is the one
who does not walk in step with the wicked
or stand in the way that sinners take
or sit in the company of mockers,
2 but whose delight is in the law of the Lord,
and who meditates on his law day and night.
3 That person is like a tree planted by streams of water,
which yields its fruit in season
and whose leaf does not wither—
whatever they do prospers.

4 Not so the wicked!
They are like chaff
that the wind blows away.
5 Therefore the wicked will not stand in the judgment,
nor sinners in the assembly of the righteous.

Commentary
Verses 1-3: To meditate in God's word, is to discourse with ourselves concerning the great things contained in it, with close application of mind and fixedness of thought. We must have constant regard to the word of God, as the rule of our actions, and the spring of our comforts; and have it in our thoughts night and day. For this purpose no time is amiss.

Verses 4-6: The ungodly are the reverse of the righteous, both in character and condition. The ungodly are not so, ver. 4; they are led by the counsel of the wicked, in the way of sinners, to the seat of the scornful; they have no delight in the law of God; they bring forth no fruit but what is evil. The righteous are like useful, fruitful trees: the ungodly are like the chaff which the wind drives away: the dust which the owner of the floor desires to have driven away, as not being of any use. They are of no worth in God's account, how highly soever they may value themselves. They are easily driven to and fro by every wind of temptation. The chaff may be, for a while, among the wheat, but He is coming, whose fan is in his hand, and who will thoroughly purge his floor. Those that, by their own sin and folly, make themselves as chaff, will be found so before the whirlwind and fire of Divine wrath. The doom of the ungodly is fixed, but whenever the sinner becomes sensible of this guilt and misery, he may be admitted into the company of the righteous by Christ the living way, and become in Christ a new creature. He has new desires, new pleasures, hopes, fears, sorrows, companions, and employments. His thoughts, words, and actions are changed. He enters on a new state, and bears a new character. Behold, all things are become new by Divine grace, which changes his soul into the image of the Redeemer. How different the character and end of the ungodly.
From the Books of Wisdom
Proverbs 30:18-33
More Sayings of Agur
18 “There are three things that are too amazing for me,
four that I do not understand:
19 the way of an eagle in the sky,
the way of a snake on a rock,
the way of a ship on the high seas,
and the way of a man with a young woman.

20 “This is the way of an adulterous woman:
She eats and wipes her mouth
and says, ‘I’ve done nothing wrong.’

21 “Under three things the earth trembles,
under four it cannot bear up:
22 a servant who becomes king,
a godless fool who gets plenty to eat,
23 a contemptible woman who gets married,
and a servant who displaces her mistress.

29 “There are three things that are stately in their stride,
four that move with stately bearing:
30 a lion, mighty among beasts,
who retreats before nothing;
31 a strutting rooster, a he-goat,
and a king secure against revolt.

32 “If you play the fool and exalt yourself,
or if you plan evil,
clap your hand over your mouth!
33 For as churning cream produces butter,
and as twisting the nose produces blood,
so stirring up anger produces strife.”

Commentary
Skill and grace in mastering difficulties are to be admired (18-19); but the cunning that delights in seducing innocent victims is hateful, especially when the guilty person feels no shame (20). Among the most unbearable of people are those who suddenly gain power or status when previously they were nothing (21-23).

Even tiny creatures are wise. They provide for their future, secure themselves against danger, cooperate with one another through order and discipline, and reach the places of highest power in the land (24-28). Other things are commended for their impressive appearance of dignity and assurance (29-31), but a commendable appearance must be accompanied by humility, purity of heart and peace-loving behavior (32-33).
From the Epistles
Romans 11:25-32
Do Not Claim to be Wiser than you Are
25 I do not want you to be ignorant of this mystery, brothers and sisters, so that you may not be conceited: Israel has experienced a hardening in part until the full number of the Gentiles has come in, 26 and in this way all Israel will be saved. As it is written:

“The deliverer will come from Zion;
he will turn godlessness away from Jacob.
27 And this is my covenant with them
when I take away their sins.”

28 As far as the gospel is concerned, they are enemies for your sake; but as far as election is concerned, they are loved on account of the patriarchs, 29 for God’s gifts and his call are irrevocable. 30 Just as you who were at one time disobedient to God have now received mercy as a result of their disobedience, 31 so they too have now become disobedient in order that they too may now receive mercy as a result of God’s mercy to you. 32 For God has bound everyone over to disobedience so that he may have mercy on them all.

Commentary
By rejecting the gospel, and by their indignation at its being preached to the Gentiles, the Jews were become enemies to God; yet they are still to be favored for the sake of their pious fathers. Though at present they are enemies to the gospel, for their hatred to the Gentiles; yet, when God's time is come, that will no longer exist, and God's love to their fathers will be remembered. True grace seeks not to confine God's favor. Those who find mercy themselves, should endeavor that through their mercy others also may obtain mercy. Not that the Jews will be restored to have their priesthood, and temple, and ceremonies again; an end is put to all these; but they are to be brought to believe in Christ, the true become one sheep-fold with the Gentiles, under Christ the Great Shepherd. The captivities of Israel, their dispersion, and their being shut out from the church, are emblems of the believer's corrections for doing wrong; and the continued care of the Lord towards that people, and the final mercy and blessed restoration intended for them, show the patience and love of God. 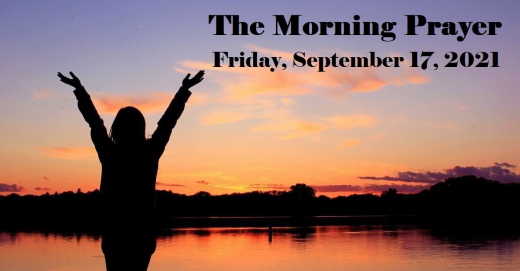 The Morning Prayer
Friday, September 17, 2021
People were overwhelmed with amazement. "He has done everything well," they said. "He even makes the deaf hear and the mute speak" (Mark 7:37, NIV).

Lord our God, you fill heaven and earth with your Spirit and allow us to share in your gifts. We thank you for all you have given us, for all you are giving and will give. We are poor and needy; all people are poor and needy in spite of their striving, longing, and seeking. Only you, through your Spirit, can awaken something in us to help us go toward your goal. Keep us from being caught up in what men do. The greatest help for our hearts is what you do, and each of us can tell something about it. Each of us has received help beyond anything we had hoped or thought of. How much you have done for us! How much you are doing for the nations! Yes, we thank you for this present time. Although our lives often seem hopeless and full of sorrow, your powers are still living among men, working for their good and awaking them to new life. The time will surely come when our hearts will be released from their hunger and we can be filled with the life from above, which you give us in Jesus Christ. Amen.
Posted by Kenny at 1:08:00 AM No comments: 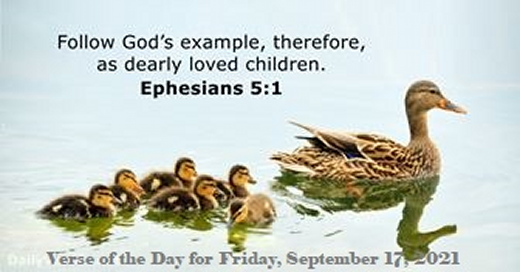 If we are the children of God, it only makes sense that we are to follow our Father. And if we refuse to walk in the ways of our heavenly Father, there is biblical reason to wonder who our father really is (1 John 3:10).

Read all of Ephesians Chapter 5