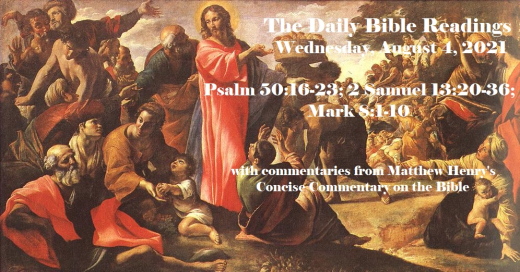 The Daily Bible Readings
Wednesday, August 4, 2021
Psalm 50:16-23; 2 Samuel 13:20-36; Mark 8:1-10
with commentaries from Matthew Henry's Concise Commentary on the Bible
Introduction
In today’s lectionary readings, in the psalms, God addresses the wicked, saying they thought He would be silent and leave them to their destructive ways, but He reminds them that He will judge them for their wicked ways and unbelief. From the Prophets, we read that Amnon is murdered for the evil thing he had done, and his killer flees. In our gospel reading, Jesus feeds 4000. In our verse of the day, God speaks to His children to tell them great and unsearchable things.

“This is what the Lord says, he who made the earth, the Lord who formed it and established it—the Lord is his name: ‘Call to me and I will answer you and tell you great and unsearchable things you do not know.’”

Throughout the Bible, God promises to speak to His children—but we must listen for His voice. To listen actively, we must come before the Lord expectantly. We must eagerly anticipate Him speaking to us.

From the Books of the Prophets
2 Samuel 13:20-36
Absalom’s Vengeance Against Amnon
13:20 Her brother Absalom said to her, “Has that Amnon, your brother, been with you? Be quiet for now, my sister; he is your brother. Don’t take this thing to heart.” And Tamar lived in her brother Absalom’s house, a desolate woman.

21 When King David heard all this, he was furious. 22 And Absalom never said a word to Amnon, either good or bad; he hated Amnon because he had disgraced his sister Tamar.

23 Two years later, when Absalom’s sheepshearers were at Baal Hazor near the border of Ephraim, he invited all the king’s sons to come there. 24 Absalom went to the king and said, “Your servant has had shearers come. Will the king and his attendants please join me?”

25 “No, my son,” the king replied. “All of us should not go; we would only be a burden to you.” Although Absalom urged him, he still refused to go but gave him his blessing.

26 Then Absalom said, “If not, please let my brother Amnon come with us.”

The king asked him, “Why should he go with you?” 27 But Absalom urged him, so he sent with him Amnon and the rest of the king’s sons.

28 Absalom ordered his men, “Listen! When Amnon is in high spirits from drinking wine and I say to you, ‘Strike Amnon down,’ then kill him. Don’t be afraid. Haven’t I given you this order? Be strong and brave.” 29 So Absalom’s men did to Amnon what Absalom had ordered. Then all the king’s sons got up, mounted their mules and fled.

30 While they were on their way, the report came to David: “Absalom has struck down all the king’s sons; not one of them is left.” 31 The king stood up, tore his clothes and lay down on the ground; and all his attendants stood by with their clothes torn.

32 But Jonadab son of Shimeah, David’s brother, said, “My lord should not think that they killed all the princes; only Amnon is dead. This has been Absalom’s express intention ever since the day Amnon raped his sister Tamar. 33 My lord the king should not be concerned about the report that all the king’s sons are dead. Only Amnon is dead.”

35 Jonadab said to the king, “See, the king’s sons have come; it has happened just as your servant said.”

36 As he finished speaking, the king’s sons came in, wailing loudly. The king, too, and all his attendants wept very bitterly.

Commentary
Verses 20-29: Observe the aggravations of Absalom's sin: he would have Ammon slain, when least fit to go out of the world. He engaged his servants in the guilt. Those servants are ill-taught who obey wicked masters, against God's commands. Indulged children always prove crosses to godly parents, whose foolish love leads them to neglect their duty to God.

Verses 30-36: Jonadab was as guilty of Ammon's death, as of his sin; such false friends do they prove, who counsel us to do wickedly. Instead of loathing Absalom as a murderer, David, after a time, longed to go forth to him. This was David's infirmity: God saw something in his heart that made a difference, else we should have thought that he, as much as Eli, honored his sons more than God.

From the Gospels
Mark 8:1-10
Jesus Feeds 4000
8:1 During those days another large crowd gathered. Since they had nothing to eat, Jesus called his disciples to him and said, 2 “I have compassion for these people; they have already been with me three days and have nothing to eat. 3 If I send them home hungry, they will collapse on the way, because some of them have come a long distance.”

4 His disciples answered, “But where in this remote place can anyone get enough bread to feed them?”

5 “How many loaves do you have?” Jesus asked.

6 He told the crowd to sit down on the ground. When he had taken the seven loaves and given thanks, he broke them and gave them to his disciples to distribute to the people, and they did so. 7 They had a few small fish as well; he gave thanks for them also and told the disciples to distribute them. 8 The people ate and were satisfied. Afterward the disciples picked up seven basketfuls of broken pieces that were left over. 9 About four thousand were present. After he had sent them away, 10 he got into the boat with his disciples and went to the region of Dalmanutha.

Commentary
Our Lord Jesus encouraged the meanest to come to him for life and grace. Christ knows and considers our frames. The bounty of Christ is always ready; to show that, he repeated this miracle. His favors are renewed, as our wants and necessities are. And those need not fear want, who have Christ to live upon by faith, and do so with thanksgiving.

The Morning Prayer for Wednesday, August 4, 2021

The Morning Prayer
Wednesday, August 4, 2021
As a prisoner for the Lord, then, I urge you to live a life worthy of the calling you have received. Be completely humble and gentle; be patient, bearing with one another in love. Make every effort to keep the unity of the Spirit through the bond of peace (Ephesians 4:1–3, NIV).

Dear Father in heaven, we thank you for the blessings you give us on earth, for it is through your gifts and work, and through the work of your children, that we can believe and be saved. Protect us here in our household. Let us make allowances for one another in love and spare no effort to maintain unity in the Spirit through the bond of peace. Grant us new strength and new gifts whenever we need them on the path you have set for us. Grant that we may rejoice and trust in you until we reach the goal. Amen.
Posted by Kenny at 1:08:00 AM No comments: 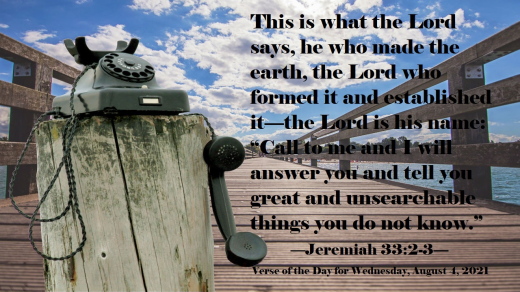 This is what the Lord says, he who made the earth, the Lord who formed it and established it—the Lord is his name: “Call to me and I will answer you and tell you great and unsearchable things you do not know.”

Throughout the Bible, God promises to speak to His children—but we must listen for His voice. To listen actively, we must come before the Lord expectantly. We must eagerly anticipate Him speaking to us.

Read all of Jeremiah Chapter 33