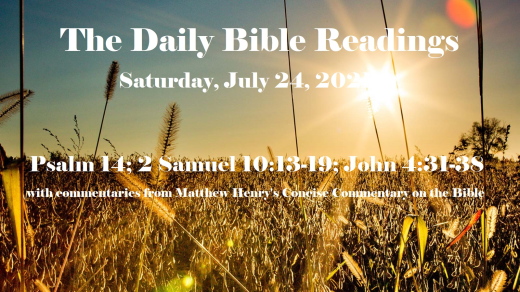 The Daily Bible Readings
Saturday, July 24, 2021
Psalm 14; 2 Samuel 10:13-19; John 4:31-38 (NIV)
with commentaries from Matthew Henry's Concise Commentary on the Bible
Introduction
In today’s lectionary readings, we read that as it was in the days of Noah, so shall it be when the Son of Man comes. From the Prophets, we read that David defeated the Ammonites. From this, we learn that it is dangerous to help those who have God against them, for when they fall, their helpers will fall with them. From Luke’s gospel, we read that Jesus had food to eat that the apostles knew nothing about. In our verse-of-the-day, we learn that good comes to those who are generous.

Today’s Lectionary Readings:
From the Psalter
Psalm 14
God in the Company of the Righteous
1 The fool says in his heart,
“There is no God.”
They are corrupt, their deeds are vile;
there is no one who does good.

2 The Lord looks down from heaven
on all mankind
to see if there are any who understand,
any who seek God.
3 All have turned away, all have become corrupt;
there is no one who does good,
not even one.

They devour my people as though eating bread;
they never call on the Lord.
5 But there they are, overwhelmed with dread,
for God is present in the company of the righteous.
6 You evildoers frustrate the plans of the poor,
but the Lord is their refuge.

7 Oh, that salvation for Israel would come out of Zion!
When the Lord restores his people,
let Jacob rejoice and Israel be glad!

Commentary
Verses 1-6: As it was in the days of Noah so shall it be when the Son of Man comes. Here we have a prophetic forecast of these coming days of corruption and violence. Iniquity abounds, wickedness is on all sides. None do good, none seek after God. While all this is used by the Spirit of God in the Epistle to the Romans to describe the condition of the race at large, here dispensationally it describes the moral conditions in the end of the age.

Verse 7: Will this end? Is there to be a better day than violence and wickedness? When will that day come? It comes when the salvation comes out of Zion (Romans 11:26), when the Lord brings back the captivity of His people, when Israel is restored. That will be when the Lord returns.

15 After the Arameans saw that they had been routed by Israel, they regrouped. 16 Hadadezer had Arameans brought from beyond the Euphrates River; they went to Helam, with Shobak the commander of Hadadezer’s army leading them.

17 When David was told of this, he gathered all Israel, crossed the Jordan and went to Helam. The Arameans formed their battle lines to meet David and fought against him. 18 But they fled before Israel, and David killed seven hundred of their charioteers and forty thousand of their foot soldiers. He also struck down Shobak the commander of their army, and he died there. 19 When all the kings who were vassals of Hadadezer saw that they had been routed by Israel, they made peace with the Israelites and became subject to them.

So the Arameans were afraid to help the Ammonites anymore.

Commentary
Here is a new attempt of the Syrians. Even the baffled cause will make head as long as there is any life in it; the enemies of the Son of David do so. But now the promise made to Abraham, Genesis 15:18, and repeated to Joshua, Joshua 1:4, that the borders of Israel should extend to the river Euphrates, was performed. Learn hence, that it is dangerous to help those who have God against them; for when they fall, their helpers will fall with them.

From the Gospels
John 4:31-38
Food that you do not Know About
4:31 Meanwhile his disciples urged him, “Rabbi, eat something.”

32 But he said to them, “I have food to eat that you know nothing about.”

33 Then his disciples said to each other, “Could someone have brought him food?”

34 “My food,” said Jesus, “is to do the will of him who sent me and to finish his work. 35 Don’t you have a saying, ‘It’s still four months until harvest’? I tell you, open your eyes and look at the fields! They are ripe for harvest. 36 Even now the one who reaps draws a wage and harvests a crop for eternal life, so that the sower and the reaper may be glad together. 37 Thus the saying ‘One sows and another reaps’ is true. 38 I sent you to reap what you have not worked for. Others have done the hard work, and you have reaped the benefits of their labor.”

Commentary
They came to him: those who would know Christ, must meet him where he records his name. Our Master has left us an example, that we may learn to do the will of God as he did; with diligence, as those that make a business of it; with delight and pleasure in it. Christ compares his work to harvest-work. The harvest is appointed and looked for before it comes; so was the gospel. Harvest-time is busy time; all must be then at work. Harvest-time is a short time, and harvest-work must be done then, or not at all; so the time of the gospel is a season, which if once past, cannot be recalled. God sometimes uses very weak and unlikely instruments for beginning and carrying on a good work.

The Morning Prayer
Saturday, July 24, 2021
So do not throw away your confidence; it will be richly rewarded. You need to persevere so that when you have done the will of God, you will receive what he has promised (Hebrews 10:35–36, NIV).

Lord our God, we bow down before you in this time when you have brought us hardships and judgment. Change this earthly age, we beseech you. Bring in something from heaven so that your will may be done and your mercy come to all nations. Strengthen us on all our ways, we pray. We thank you for all you have done for us. May your name be praised and glorified at all times. We want to follow you and to remain in your heavenly life. Amen.
Posted by Kenny at 1:08:00 AM No comments: 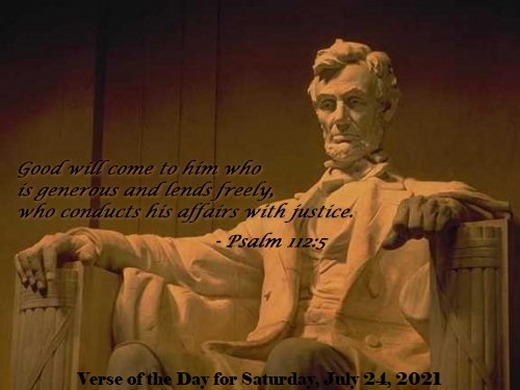