Introduction
In today’s lectionary readings, we read that the victories with which God blessed David over the enemies of Israel are types of Christ’s victory, for himself and all believers, about the power contained in the ark of the covenant when Uzzah was struck dead for even touching the ark, and about Paul’s arrest while he was in Jerusalem after he was attacked by a mob who believed that he had brought a gentile into the temple. In our verse-of-the day, we read one of Jesus’ answers to Satan’s temptations.

Jesus answered, “It is written: ‘Man shall not live on bread alone, but on every word that comes from the mouth of God.’”

Jesus responded to each of Satan’s three temptations by appealing to the unchanging Word of God: “It is written!” If we want to successfully overcome temptation, we must do the same—use God’s Word as our offensive weapons against an inferior foe. This means we must take time to read and study His Word. You cannot go into battle each day unarmed—and yet, many do this very thing by ignoring the Bible and the principles it contains.

Today’s Lectionary Readings:
From the Psalter
Psalm 68:24-35
Awesome is God in the Sanctuary
24 Your procession, God, has come into view,
the procession of my God and King into the sanctuary.
25 In front are the singers, after them the musicians;
with them are the young women playing the timbrels.
26 Praise God in the great congregation;
praise the Lord in the assembly of Israel.
27 There is the little tribe of Benjamin, leading them,
there the great throng of Judah’s princes,
and there the princes of Zebulun and of Naphtali.

28 Summon your power, God;
show us your strength, our God, as you have done before.
29 Because of your temple at Jerusalem
kings will bring you gifts.
30 Rebuke the beast among the reeds,
the herd of bulls among the calves of the nations.
Humbled, may the beast bring bars of silver.
Scatter the nations who delight in war.
31 Envoys will come from Egypt;
Cush will submit herself to God.

32 Sing to God, you kingdoms of the earth,
sing praise to the Lord,
33 to him who rides across the highest heavens, the ancient heavens,
who thunders with mighty voice.
34 Proclaim the power of God,
whose majesty is over Israel,
whose power is in the heavens.
35 You, God, are awesome in your sanctuary;
the God of Israel gives power and strength to his people.

Praise be to God!

Commentary
Verses 24-28: The victories with which God blessed David over the enemies of Israel, are types of Christ's victory, for himself and for all believers. Those who take him for theirs, may see him acting as their God, as their King, for their good, and in answer to their prayers; especially in and by his word and ordinances. The kingdom of the Messiah shall be submitted to by all the rulers and learned in the world. The people seem to address the king, ver. 28. But the words are applicable to the Redeemer, to his church, and every true believer. We pray, that thou, O God the Son, wilt complete thine undertaking for us, by finishing thy good work in us.

Verses 29-31: A powerful invitation is given to those that are without, to join the church. Some shall submit from fear; overcome by their consciences, and the checks of Providence, they are brought to make peace with the church. Others will submit willingly, ver. 29; 31. There is that beauty and benefit in the service of God, and in the gospel of Christ which went forth from Jerusalem, which is enough to invite sinners out of all nations.

Verses 32-35: God is to be admired and adored with reverence and godly fear, by all that attend in his holy places. The God of Israel gives strength and power unto his people. Through Christ strengthening us we can do all things, not otherwise; therefore he must have the glory of all we do, with our humble thanks for enabling us to do it, and for accepting the work of his hands in us.

From the historical books of the Old Testament
2 Samuel 6:6-12a
The Ark’s Power
6:6 When they came to the threshing floor of Nakon, Uzzah reached out and took hold of the ark of God, because the oxen stumbled. 7 The Lord’s anger burned against Uzzah because of his irreverent act; therefore God struck him down, and he died there beside the ark of God.

8 Then David was angry because the Lord’s wrath had broken out against Uzzah, and to this day that place is called Perez Uzzah.

12a Now King David was told, “The Lord has blessed the household of Obed-Edom and everything he has, because of the ark of God.”

Commentary
Uzzah was struck dead for touching the ark. God saw presumption and irreverence in Uzzah's heart. Familiarity, even with that which is most awful, is apt to breed contempt. If it were so great a crime for one to lay hold on the ark of the covenant who had no right to do so, what is it for those to lay claim to the privileges of the covenant that come not up to the terms of it? Obed-edom opened his doors without fear, knowing the ark was a savour of death unto death to those only who treated it wrong. The same hand that punished Uzzah's proud presumption, rewarded Obed-edom's humble boldness. Let none think the worse of the gospel for the judgments on those that reject it, but consider the blessings it brings to all who receive it. Let masters of families be encouraged to keep up religion in their families. It is good to live in a family that entertains the ark, for all about it will fare the better.

From the book of Acts
Acts 21:27-39
Paul Arrested
21:27 When the seven days were nearly over, some Jews from the province of Asia saw Paul at the temple. They stirred up the whole crowd and seized him, 28 shouting, “Fellow Israelites, help us! This is the man who teaches everyone everywhere against our people and our law and this place. And besides, he has brought Greeks into the temple and defiled this holy place.” 29 (They had previously seen Trophimus the Ephesian in the city with Paul and assumed that Paul had brought him into the temple.)

30 The whole city was aroused, and the people came running from all directions. Seizing Paul, they dragged him from the temple, and immediately the gates were shut. 31 While they were trying to kill him, news reached the commander of the Roman troops that the whole city of Jerusalem was in an uproar. 32 He at once took some officers and soldiers and ran down to the crowd. When the rioters saw the commander and his soldiers, they stopped beating Paul.

33 The commander came up and arrested him and ordered him to be bound with two chains. Then he asked who he was and what he had done. 34 Some in the crowd shouted one thing and some another, and since the commander could not get at the truth because of the uproar, he ordered that Paul be taken into the barracks. 35 When Paul reached the steps, the violence of the mob was so great he had to be carried by the soldiers. 36 The crowd that followed kept shouting, “Get rid of him!”

37 As the soldiers were about to take Paul into the barracks, he asked the commander, “May I say something to you?”

“Do you speak Greek?” he replied. 38 “Aren’t you the Egyptian who started a revolt and led four thousand terrorists out into the wilderness some time ago?”

39 Paul answered, “I am a Jew, from Tarsus in Cilicia, a citizen of no ordinary city. Please let me speak to the people.”

Commentary
In the temple, where Paul should have been protected as in a place of safety, he was violently set upon. They falsely charged him with ill doctrine and ill practice against the Mosaic ceremonies. It is no new thing for those who mean honestly and act regularly, to have things laid to their charge which they know not and never thought of. It is common for the wise and good to have that charged against them by malicious people, with which they thought to have obliged them. God often makes those a protection to his people, who have no affection to them, but only have compassion for sufferers, and regard to the public peace. And here see what false, mistaken notions of good people and good ministers, many run away with. But God seasonably interposes for the safety of his servants, from wicked and unreasonable men; and gives them opportunities to speak for themselves, to plead for the Redeemer, and to spread abroad his glorious gospel. 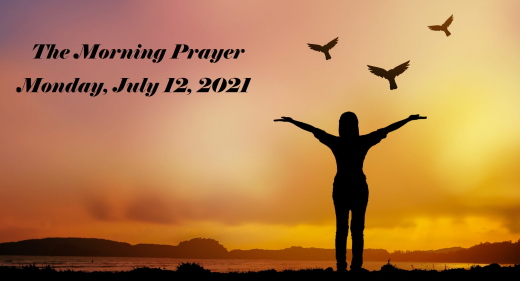 The Morning Prayer
Monday, July 12, 2021
I have been crucified with Christ and I no longer live, but Christ lives in me. The life I now live in the body, I live by faith in the Son of God, who loved me and gave himself for me (Galatians 2:20, NIV).

Almighty God, keep watch over us and lead us fully into the life of Jesus Christ. Let your Son Jesus Christ become truly living within us so that we may be full of joy because we belong to the realm of heaven and may live every day with faith in him. We thank you for all you have let us experience. We thank you with all our hearts that in your great compassion you have showered so much good on us who are not yet perfect in faith. Keep our hearts in the light, we pray. Keep us patient and dedicated, for then more and more can be done among us poor children of earth, to the glory of your name. Amen.
Posted by Kenny at 1:08:00 AM No comments: 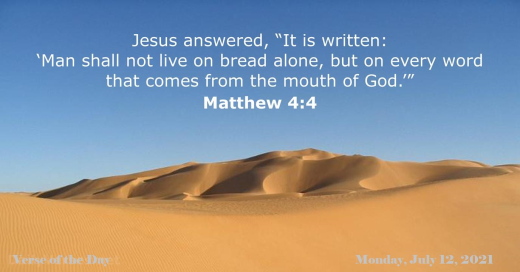 Jesus answered, “It is written: ‘Man shall not live on bread alone, but on every word that comes from the mouth of God.’”

Jesus responded to each of Satan’s three temptations by appealing to the unchanging Word of God: “It is written!” If we want to successfully overcome temptation, we must do the same—use God’s Word as our offensive weapons against an inferior foe. This means we must take time to read and study His Word. You cannot go into battle each day unarmed—and yet, many do this very thing by ignoring the Bible and the principles it contains.

Read all of Matthew chapter 4