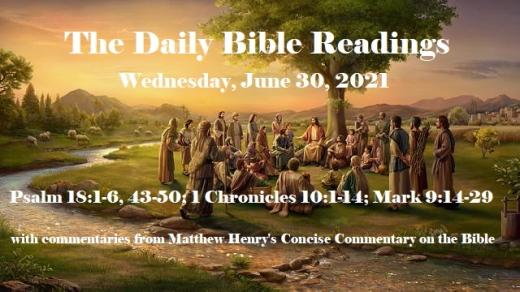 The Lord will be king over the whole earth. On that day there will be one Lord, and his name the only name.

Today’s Lectionary Readings:
From the Psalter
Psalm 18:1-6, 43-50
Steadfast Love to God’s Anointed
1 I love you, Lord, my strength.

2 The Lord is my rock, my fortress and my deliverer;
my God is my rock, in whom I take refuge,
my shield and the horn of my salvation, my stronghold.

3 I called to the Lord, who is worthy of praise,
and I have been saved from my enemies.
4 The cords of death entangled me;
the torrents of destruction overwhelmed me.
5 The cords of the grave coiled around me;
the snares of death confronted me.

6 In my distress I called to the Lord;
I cried to my God for help.
From his temple he heard my voice;
my cry came before him, into his ears.

43 You have delivered me from the attacks of the people;
you have made me the head of nations.
People I did not know now serve me,
44    foreigners cower before me;
as soon as they hear of me, they obey me.
45 They all lose heart;
they come trembling from their strongholds.

46 The Lord lives! Praise be to my Rock!
Exalted be God my Savior!
47 He is the God who avenges me,
who subdues nations under me,
48    who saves me from my enemies.
You exalted me above my foes;
from a violent man you rescued me.
49 Therefore I will praise you, Lord, among the nations;
I will sing the praises of your name.

50 He gives his king great victories;
he shows unfailing love to his anointed,
to David and to his descendants forever.

Commentary
Verses 1-19 — The first words, "I love you, Lord, my strength," are the scope and contents of the psalm. Those that truly love God, may triumph in him as their Rock and Refuge, and may with confidence call upon him. It is good for us to observe all the circumstances of a mercy which magnify the power of God and his goodness to us in it. David was a praying man, and God was found a prayer-hearing God. If we pray as he did, we shall speed as he did.

Verses 43-50 — Learn that we must seek release being made through Christ, shall be rejected. In David the type, we behold out of trouble through Christ. The prayer put up, without reconciliation Jesus our Redeemer, conflicting with enemies, compassed with sorrows and with floods of ungodly men, enduring not only the pains of death, but the wrath of God for us; yet calling upon the Father with strong cries and tears; rescued from the grave; proceeding to reconcile, or to put under his feet all other enemies, till death, the last enemy, shall be destroyed. We should love the Lord, our Strength, and our Salvation; we should call on him in every trouble, and praise him for every deliverance; we should aim to walk with him in all righteousness and true holiness, keeping from sin. If we belong to him, he conquers and reigns for us, and we shall conquer and reign through him, and partake of the mercy of our anointed King, which is promised to all his seed for evermore. Amen.

From the Historical books of the Old Testament
1 Chronicles 10:1-14
Jonathan’s Death
10:1 Now the Philistines fought against Israel; the Israelites fled before them, and many fell dead on Mount Gilboa. 2 The Philistines were in hot pursuit of Saul and his sons, and they killed his sons Jonathan, Abinadab and Malki-Shua. 3 The fighting grew fierce around Saul, and when the archers overtook him, they wounded him.

4 Saul said to his armor-bearer, “Draw your sword and run me through, or these uncircumcised fellows will come and abuse me.”

But his armor-bearer was terrified and would not do it; so Saul took his own sword and fell on it. 5 When the armor-bearer saw that Saul was dead, he too fell on his sword and died. 6 So Saul and his three sons died, and all his house died together.

7 When all the Israelites in the valley saw that the army had fled and that Saul and his sons had died, they abandoned their towns and fled. And the Philistines came and occupied them.

8 The next day, when the Philistines came to strip the dead, they found Saul and his sons fallen on Mount Gilboa. 9 They stripped him and took his head and his armor, and sent messengers throughout the land of the Philistines to proclaim the news among their idols and their people. 10 They put his armor in the temple of their gods and hung up his head in the temple of Dagon.

11 When all the inhabitants of Jabesh Gilead heard what the Philistines had done to Saul, 12 all their valiant men went and took the bodies of Saul and his sons and brought them to Jabesh. Then they buried their bones under the great tree in Jabesh, and they fasted seven days.

13 Saul died because he was unfaithful to the Lord; he did not keep the word of the Lord and even consulted a medium for guidance, 14 and did not inquire of the Lord. So the Lord put him to death and turned the kingdom over to David son of Jesse.

Commentary
Here in sublime and graphic language is recounted the story of the death of the king chosen by men. It is a terrible picture of a man of magnificent capability going down to utter ruin. Routed by his enemies, he died by his own hand in the midst of the field of defeat.

The reason for such failure is clearly declared. He trespassed against God, and then sought counsel of one who had a familiar spirit. Magnificent indeed was the ruin, but it was ruin. Saul was a man than whom no other had greater opportunities, but his failure was disastrous. Of good standing in the nation, distinctly called and commissioned by God, honored with the friendship of Samuel, surrounded by a band of men whose hearts God had touched, everything was in his favor. From the beginning he failed; step by step he declined in conduct and character, until he went out, dragging his nation into such confusion as threatened its very existence (G. Campbell Morgan's Exposition on the Whole Bible).

From the Gospels
Mark 9:14-29
Jesus Heals a Child
9:14 When they came to the other disciples, they saw a large crowd around them and the teachers of the law arguing with them. 15 As soon as all the people saw Jesus, they were overwhelmed with wonder and ran to greet him.

16 “What are you arguing with them about?” he asked.

17 A man in the crowd answered, “Teacher, I brought you my son, who is possessed by a spirit that has robbed him of speech. 18 Whenever it seizes him, it throws him to the ground. He foams at the mouth, gnashes his teeth and becomes rigid. I asked your disciples to drive out the spirit, but they could not.”

20 So they brought him. When the spirit saw Jesus, it immediately threw the boy into a convulsion. He fell to the ground and rolled around, foaming at the mouth.

21 Jesus asked the boy’s father, “How long has he been like this?”

“From childhood,” he answered. 22 “It has often thrown him into fire or water to kill him. But if you can do anything, take pity on us and help us.”

23 “‘If you can’?” said Jesus. “Everything is possible for one who believes.”

24 Immediately the boy’s father exclaimed, “I do believe; help me overcome my unbelief!”

25 When Jesus saw that a crowd was running to the scene, he rebuked the impure spirit. “You deaf and mute spirit,” he said, “I command you, come out of him and never enter him again.”

26 The spirit shrieked, convulsed him violently and came out. The boy looked so much like a corpse that many said, “He’s dead.” 27 But Jesus took him by the hand and lifted him to his feet, and he stood up.

28 After Jesus had gone indoors, his disciples asked him privately, “Why couldn’t we drive it out?”

29 He replied, “This kind can come out only by prayer.”

Commentary
The father of the suffering youth reflected on the want of power in the disciples; but Christ will have him reckon the disappointment to the want of faith. Very much is promised to our believing. If thou canst believe, it is possible that thy hard heart may be softened, thy spiritual diseases may be cured; and, weak as thou art, thou mayest be able to hold out to the end. Those that complain of unbelief, must look up to Christ for grace to help them against it, and his grace will be sufficient for them. Whom Christ cures, he cures effectually. But Satan is unwilling to be driven from those that have been long his slaves, and, when he cannot deceive or destroy the sinner, he will cause him all the terror that he can. The disciples must not think to do their work always with the same ease; some services call for more than ordinary pains.

The Morning Prayer
Wednesday, June 30, 2021
At that time Jesus said, “I praise you, Father, Lord of heaven and earth, because you have hidden these things from the wise and learned, and revealed them to little children.”
— Matthew 11:25 (NIV)
Lord our God, we thank you for your Word, which is light and strength to us. We thank you for all you give us. We thank you that we may be counted among the simple-hearted, among the children. We do not want to be anything great in the world. We want only to be with you as your children, helpless little children, watched over by you, the Creator and Father of all. Grant us your blessing. Help us in all that is good and right, also in our daily work, so that we can be your children and do what you have commanded. May your name be honored at all times, your kingdom come, and your will be done on earth as in heaven. Give us today our daily bread. Forgive us the wrong we have done as we forgive those who have wronged us, and lead us not into temptation, but deliver us from evil. For yours is the kingdom, the power, and the glory for ever and ever. Amen.
Posted by Kenny at 1:08:00 AM No comments: 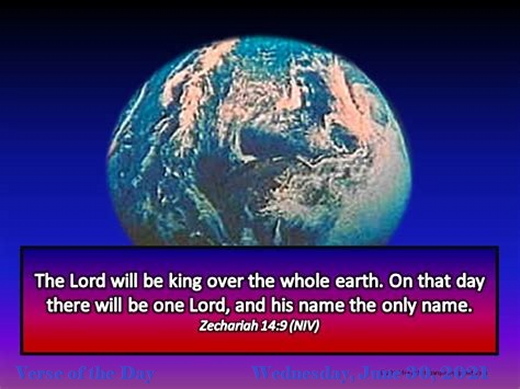 The Lord will be king over the whole earth. On that day there will be one Lord, and his name the only name.

Read all of Zechariah Chapter 14