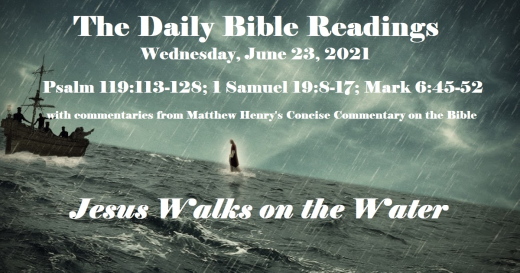 …those who hope in the Lord will renew their strength. They will soar on wings like eagles; they will run and not grow weary, they will walk and not be faint.

Life Lessons: God renews and strengthens those who are weak. He is the One who lifts, revitalizes, and empowers us to persevere when everything inside of us tells us we cannot go a step further. When we surrender our problems to Him, we gain His ability and power to run as far as He wants us to go.

Today’s Lectionary Readings:
From the Psalter
Psalm 119:113-128
Do Not Leave Me to my Oppressors
113 I hate double-minded people,
but I love your law.
114 You are my refuge and my shield;
I have put my hope in your word.
115 Away from me, you evildoers,
that I may keep the commands of my God!
116 Sustain me, my God, according to your promise, and I will live;
do not let my hopes be dashed.
117 Uphold me, and I will be delivered;
I will always have regard for your decrees.
118 You reject all who stray from your decrees,
for their delusions come to nothing.
119 All the wicked of the earth you discard like dross;
therefore I love your statutes.
120 My flesh trembles in fear of you;
I stand in awe of your laws.

121 I have done what is righteous and just;
do not leave me to my oppressors.
122 Ensure your servant’s well-being;
do not let the arrogant oppress me.
123 My eyes fail, looking for your salvation,
looking for your righteous promise.
124 Deal with your servant according to your love
and teach me your decrees.
125 I am your servant; give me discernment
that I may understand your statutes.
126 It is time for you to act, Lord;
your law is being broken.
127 Because I love your commands
more than gold, more than pure gold,
128 and because I consider all your precepts right,
I hate every wrong path.

Commentary
The settling of God's word in heaven, is opposed to the changes and revolutions of the earth. And the engagements of God's covenant are established more firmly than the earth itself. All the creatures answer the ends of their creation: shall man, who alone is endued with reason, be the only unprofitable burden of the earth? We may make the Bible a pleasant companion at any time. But the word, without the grace of God, would not quicken us. See the best help for bad memories, namely, good affections; and though the exact words be lost, if the meaning remain, that is well. I am thine, not my own, not the world's; save me from sin, save me from ruin. The Lord will keep the man in peace, whose mind is stayed on him. It is poor perfection which one sees and end of. Such are all things in this world, which pass for perfections. The glory of man is but as the flower of the grass. The psalmist had seen the fullness of the word of God, and its sufficiency. The word of the Lord reaches to all cases, to all times. It will take us from all confidence in man, or in our own wisdom, strength, and righteousness. Thus shall we seek comfort and happiness from Christ alone.

From the Historical books of the Old Testament
1 Samuel 19:8-17
Michal Helps David Escape
19:8 Once more war broke out, and David went out and fought the Philistines. He struck them with such force that they fled before him.

9 But an evil spirit from the Lord came on Saul as he was sitting in his house with his spear in his hand. While David was playing the lyre, 10 Saul tried to pin him to the wall with his spear, but David eluded him as Saul drove the spear into the wall. That night David made good his escape.

11 Saul sent men to David’s house to watch it and to kill him in the morning. But Michal, David’s wife, warned him, “If you don’t run for your life tonight, tomorrow you’ll be killed.” 12 So Michal let David down through a window, and he fled and escaped. 13 Then Michal took an idol and laid it on the bed, covering it with a garment and putting some goats’ hair at the head.

14 When Saul sent the men to capture David, Michal said, “He is ill.”

15 Then Saul sent the men back to see David and told them, “Bring him up to me in his bed so that I may kill him.” 16 But when the men entered, there was the idol in the bed, and at the head was some goats’ hair.

17 Saul said to Michal, “Why did you deceive me like this and send my enemy away so that he escaped?”

Commentary
Michal's stratagem to gain time till David got to a distance was allowable, but her falsehood had not even the plea of necessity to excuse it, and manifests that she was not influenced by the same spirit of piety which had dictated Jonathan's language to Saul. In flying to Samuel, David made God his refuge. Samuel, as a prophet, was best able to advise him what to do in this day of distress. He met with little rest or satisfaction in Saul's court, therefore went to seek it in Samuel's church. What little pleasure is to be had in this world, those have who live a life of communion with God; to that David returned in the time of trouble. So impatient was Saul after David's blood, so restless against him, that although baffled by one providence after another, he could not see that David was under the special protection of God. And when God will take this way to protect David, even Saul prophesies. Many have great gifts, yet no grace; they may prophesy in Christ's name, yet are disowned by him. Let us daily seek for renewing grace, which shall be in us as a well of water springing up into everlasting life. Let us cleave to truth and holiness with full purpose of heart. In every danger and trouble, let us seek protection, comfort, and direction in God's ordinances.

From the Gospel of Mark
Mark 6:45-52
Jesus Walks on the Water
6:45 Immediately Jesus made his disciples get into the boat and go on ahead of him to Bethsaida, while he dismissed the crowd. 46 After leaving them, he went up on a mountainside to pray.

47 Later that night, the boat was in the middle of the lake, and he was alone on land. 48 He saw the disciples straining at the oars, because the wind was against them. Shortly before dawn he went out to them, walking on the lake. He was about to pass by them, 49 but when they saw him walking on the lake, they thought he was a ghost. They cried out, 50 because they all saw him and were terrified.

Immediately he spoke to them and said, “Take courage! It is I. Don’t be afraid.” 51 Then he climbed into the boat with them, and the wind died down. They were completely amazed, 52 for they had not understood about the loaves; their hearts were hardened.

Commentary
The church is often like a ship at sea, tossed with tempests, and not comforted: we may have Christ for us, yet wind and tide against us; but it is a comfort to Christ's disciples in a storm, that their Master is in the heavenly mount, interceding for them. And no difficulties can hinder Christ's appearance for his people, when the set time is come. He silenced their fears, by making himself known to them. Our fears are soon satisfied, if our mistakes are set right, especially our mistakes as to Christ. Let the disciples have their Master with them, and all is well. It is for want of rightly understanding Christ's former works, that we view his present works as if there never were the like before. If Christ's ministers now could cure people's bodily diseases, what multitudes would flock after them! It is sad to think how much more most care about their bodies than about their souls. 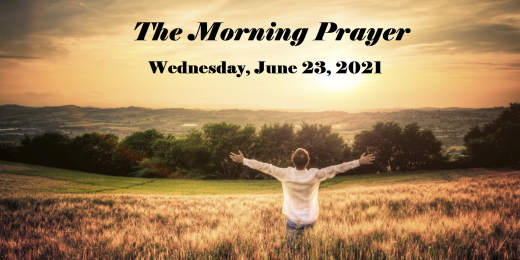 The Morning Prayer
Wednesday, June 23, 2021
And over all these virtues put on love, which binds them all together in perfect unity. Let the peace of Christ rule in your hearts, since as members of one body you were called to peace. And be thankful.
— Colossians 3:14-15 (NIV)
Lord our God, grant your peace in our hearts. Grant that we may be your children, allowed to serve you in true peace through the forgiveness of sins. Turn your eyes to the world and its sin, that something new may come for all who are deeply unhappy, groaning under the anguish of their lives. Your mercy is great, your compassion is beyond measure. For Jesus Christ’s sake you will bring into the world the salvation that is promised. You will bring the great day of Jesus Christ the Savior, who has shed his blood for us. He can come to those now in need and misery, bringing his peace and his power into their hearts so that even death turns into life and everything serves your praise and glory, Lord our God and Father in heaven. Bless us and bless our nation. May life from heaven grow in those who understand you and who are to be your people. May your will be done, Lord God, until your kingdom comes in its fullness and all the world may see that Jesus Christ is the Lord, to your glory, O God our Father. Amen.
Posted by Kenny at 1:08:00 AM No comments:

…those who hope in the Lord will renew their strength. They will soar on wings like eagles; they will run and not grow weary, they will walk and not be faint.

Life Lessons: God renews and strengthens those who are weak. He is the One who lifts, revitalizes, and empowers us to persevere when everything inside of us tells us we cannot go a step further. When we surrender our problems to Him, we gain His ability and power to run as far as He wants us to go.

Read all of Isaiah 40