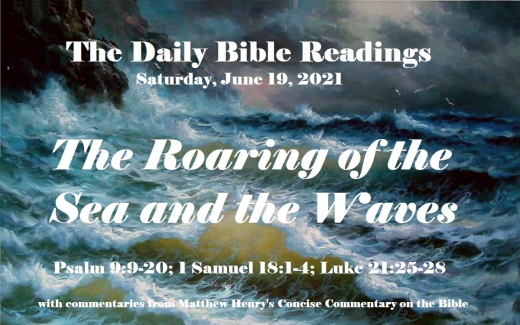 Husbands, love your wives, just as Christ loved the church and gave himself up for her to make her holy, cleansing her by the washing with water through the word.

Today’s Lectionary Readings:
From the Psalter
Psalm 9:9-20
Refuge in Time of Trouble
9 The Lord is a refuge for the oppressed,
a stronghold in times of trouble.
10 Those who know your name trust in you,
for you, Lord, have never forsaken those who seek you.

11 Sing the praises of the Lord, enthroned in Zion;
proclaim among the nations what he has done.
12 For he who avenges blood remembers;
he does not ignore the cries of the afflicted.

13 Lord, see how my enemies persecute me!
Have mercy and lift me up from the gates of death,
14 that I may declare your praises
in the gates of Daughter Zion,
and there rejoice in your salvation.

15 The nations have fallen into the pit they have dug;
their feet are caught in the net they have hidden.
16 The Lord is known by his acts of justice;
the wicked are ensnared by the work of their hands.
17 The wicked go down to the realm of the dead,
all the nations that forget God.
18 But God will never forget the needy;
the hope of the afflicted will never perish.

Commentary
His people may, by faith, flee to him as their Refuge, and may depend on his power and promise for their safety, so that no real hurt shall be done to them. Those who know him to be a God of truth and faithfulness, will rejoice in his word of promise, and rest upon that. Those who know him to be an everlasting Father, will trust him with their souls as their main care, and trust in him at all times, even to the end; and by constant care seek to approve themselves to him in the whole course of their lives. Who is there that would not seek him, who never hath forsaken those that seek Him? Those who believe that God is greatly to be praised, not only desire to praise him better themselves, but desire that others may join with them. There is a day coming, when it will appear that he has not forgotten the cry of the humble; neither the cry of their blood, or the cry of their prayers. We are never brought so low, so near to death, but God can raise us up. If he has saved us from spiritual and eternal death, we may thence hope, that in all our distresses he will be a very present help to us. The overruling providence of God frequently so orders it, that persecutors and oppressors are brought to ruin by the projects they formed to destroy the people of God. Drunkards kill themselves; prodigals beggar themselves; the contentious bring mischief upon themselves: thus men's sins may be read in their punishment, and it becomes plain to all, that the destruction of sinners is of themselves. All wickedness came originally with the wicked one from hell; and those who continue in sin, must go to that place of torment. The true state, both of nations and of individuals, may be correctly estimated by this one rule, whether in their doings they remember or forget God. David encourages the people of God to wait for his salvation, though it should be long deferred. God will make it appear that he never did forget them: it is not possible he should. Strange that man, dust in his and about him, should yet need some sharp affliction, some severe visitation from God, to bring him to the knowledge of himself, and make him feel who and what he is.

From the Historical books of the Old Testament
1 Samuel 18:1-4
Jonathan Covenants With David
18:1 After David had finished talking with Saul, Jonathan became one in spirit with David, and he loved him as himself. 2 From that day Saul kept David with him and did not let him return home to his family. 3 And Jonathan made a covenant with David because he loved him as himself. 4 Jonathan took off the robe he was wearing and gave it to David, along with his tunic, and even his sword, his bow and his belt.

Commentary
The friendship of David and Jonathan was the effect of Divine grace, which produces in true believers one heart and one soul, and causes them to love each other. This union of souls is from partaking in the Spirit of Christ. Where God unites hearts, carnal matters are too weak to separate them. Those who love Christ as their own souls, will be willing to join themselves to him in an everlasting covenant. It was certainly a great proof of the power of God's grace in David, that he was able to bear all this respect and honor, without being lifted up above measure.

From the Gospel of Luke
Luke 21:25-28
The Roaring of the Sea and the Waves
21:25 “There will be signs in the sun, moon and stars. On the earth, nations will be in anguish and perplexity at the roaring and tossing of the sea. 26 People will faint from terror, apprehensive of what is coming on the world, for the heavenly bodies will be shaken. 27 At that time they will see the Son of Man coming in a cloud with power and great glory. 28 When these things begin to take place, stand up and lift up your heads, because your redemption is drawing near.”

Commentary
With much curiosity those about Christ ask as to the time when the great desolation should be. He answers with clearness and fullness, as far as was necessary to teach them their duty; for all knowledge is desirable as far as it is in order to practice. Though spiritual judgements are the most common in gospel times, yet God makes use of temporal judgments also. Christ tells them what hard things they should suffer for his name's sake, and encourages them to bear up under their trials, and to go on in their work, notwithstanding the opposition they would meet with. God will stand by you, and own you, and assist you. This was remarkably fulfilled after the pouring out of the Spirit, by whom Christ gave his disciples wisdom and utterance. Though we may be losers for Christ, we shall not, we cannot be losers by him, in the end. It is our duty and interest at all times, especially in perilous, trying times, to secure the safety of our own souls. It is by Christian patience we keep possession of our own souls, and keep out all those impressions which would put us out of temper. We may view the prophecy before us much as those Old Testament prophecies, which, together with their great object, embrace, or glance at some nearer object of importance to the church. Having given an idea of the times for about thirty-eight years next to come, Christ shows what all those things would end in, namely, the destruction of Jerusalem, and the utter dispersion of the Jewish nation; which would be a type and figure of Christ's second coming. The scattered Jews around us preach the truth of Christianity; and prove, that though heaven and earth shall pass away, the words of Jesus shall not pass away. They also remind us to pray for those times when neither the real, nor the spiritual Jerusalem, shall any longer be trodden down by the Gentiles, and when both Jews and Gentiles shall be turned to the Lord. When Christ came to destroy the Jews, he came to redeem the Christians that were persecuted and oppressed by them; and then had the churches rest. When he comes to judge the world, he will redeem all that are his from their troubles. So fully did the Divine judgements come upon the Jews, that their city is set as an example before us, to show that sins will not pass unpunished; and that the terrors of the Lord, and his threatenings against impenitent sinners, will all come to pass, even as his word was true, and his wrath great upon Jerusalem.

The Morning Prayer
Saturday, June 19, 2021
“Though the mountains be shaken and the hills be removed, yet my unfailing love for you will not be shaken nor my covenant of peace be removed,” says the Lord, who has compassion on you.
— Isaiah 54:10 (NIV)
Lord, O great and almighty God, we thank you that you have given us the Savior, in whom we can become united and have peace on earth. May he, the Savior, work powerfully among us. May your Spirit come into people’s hearts so that they learn to acknowledge you as their leader and their God and to rejoice in their lives, which are intended for eternal life. Bless us through your Word and through all the good you do for us. Constantly renew and strengthen us in faith and in patience through the grace you send us. Remember all the peoples who should become yours in the name of Jesus Christ. May they all confess that Jesus Christ is the Lord, to the honor of God the Father. We praise you for the promise you have given us of a wonderful new day of help for all. We praise you that you have created all people to recognize their true calling and their way to salvation. Amen.
Posted by Kenny at 1:08:00 AM No comments: 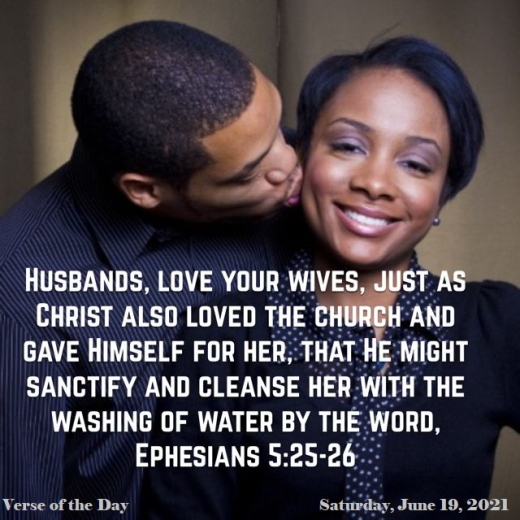 Husbands, love your wives, just as Christ loved the church and gave himself up for her to make her holy, cleansing her by the washing with water through the word.

Read all of Ephesians 5