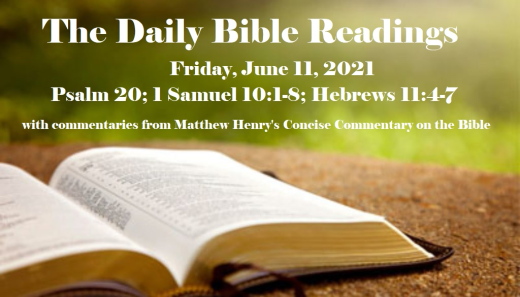 From the Historical books of the Old Testament
1 Samuel 10:1-8
Samuel Tells Saul He Will be King
10:1 Then Samuel took a flask of olive oil and poured it on Saul’s head and kissed him, saying, “Has not the Lord anointed you ruler over his inheritance? 2 When you leave me today, you will meet two men near Rachel’s tomb, at Zelzah on the border of Benjamin. They will say to you, ‘The donkeys you set out to look for have been found. And now your father has stopped thinking about them and is worried about you. He is asking, “What shall I do about my son?”’

3 “Then you will go on from there until you reach the great tree of Tabor. Three men going up to worship God at Bethel will meet you there. One will be carrying three young goats, another three loaves of bread, and another a skin of wine. 4 They will greet you and offer you two loaves of bread, which you will accept from them.

5 “After that you will go to Gibeah of God, where there is a Philistine outpost. As you approach the town, you will meet a procession of prophets coming down from the high place with lyres, timbrels, pipes and harps being played before them, and they will be prophesying. 6 The Spirit of the Lord will come powerfully upon you, and you will prophesy with them; and you will be changed into a different person. 7 Once these signs are fulfilled, do whatever your hand finds to do, for God is with you.

8 “Go down ahead of me to Gilgal. I will surely come down to you to sacrifice burnt offerings and fellowship offerings, but you must wait seven days until I come to you and tell you what you are to do.”

Commentary
The sacred anointing, then used, pointed at the great Messiah, or Anointed One, the King of the church, and High Priest of our profession, who was anointed with the oil of the Spirit, not by measure, but without measure, and above all the priests and princes of the Jewish church. For Saul's further satisfaction, Samuel gives him some signs which should come to pass the same day. The first place he directs him to, was the sepulcher of one of his ancestors; there he must be reminded of his own mortality, and now that he had a crown before him, must think of his grave, in which all his honor would be laid in the dust. From the time of Samuel there appears to have been schools, or places where pious young men were brought up in the knowledge of Divine things. Saul should find himself strongly moved to join with them, and should be turned into another man from what he had been. The Spirit of God changes men, wonderfully transforms them. Saul, by praising God in the communion of saints, became another man, but it may be questioned if he became a new man.

From the Epistle to the Hebrews
Hebrews 11:4-7
Christ Tastes Death for Everyone
11:4 By faith Abel brought God a better offering than Cain did. By faith he was commended as righteous, when God spoke well of his offerings. And by faith Abel still speaks, even though he is dead.

Commentary
Here follow some illustrious examples of faith from the Old Testament. Abel brought a sacrifice of atonement from the firstlings of the flock, acknowledging himself a sinner who deserved to die, and only hoping for mercy through the great Sacrifice. Cain's proud rage and enmity against the accepted worshipper of God, led to the awful effects the same principles have produced in every age; the cruel persecution, and even murder of believers. By faith Abel, being dead, yet speaketh; he left an instructive and speaking example. Enoch was translated, or removed, that he should not see death; God took him into heaven, as Christ will do the saints who shall be alive at his second coming. We cannot come to God, unless we believe that he is what he has revealed himself to be in the Scripture. Those who would find God, must seek him with all their heart. Noah's faith influenced his practice; it moved him to prepare an ark. His faith condemned the unbelief of others; and his obedience condemned their contempt and rebellion. Good examples either convert sinners or condemn them. This shows how believers, being warned of God to flee from the wrath to come, are moved with fear, take refuge in Christ, and become heirs of the righteousness of faith. 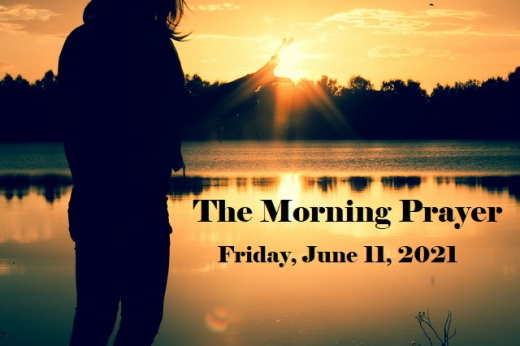 The Morning Prayer
Friday, June 11, 2021
Your love, Lord, reaches to the heavens, your faithfulness to the skies… How priceless is your unfailing love, O God! People take refuge in the shadow of your wings.
— Psalm 36:5, 7 (NIV)
Lord our God, we turn our hearts and minds to you. Be with us and grant us your Spirit. May your Word be a blessing for us. We thank you that this Word is given us in Jesus Christ, our Savior. Almighty God, stretch out your hand over the whole world. Let your Spirit bring a new age, an age of truth, righteousness, and love, an age of peace that comes from you. O Lord God, we are your children, and as your children we pray to you in the name of Jesus Christ. You will hear us, and we look forward with joy to the time when all promises will be fulfilled, the time spoken about by the prophets, and especially by your Son, Jesus Christ. Be with us and gather us in your Spirit. Amen.
Posted by Kenny at 1:08:00 AM No comments: 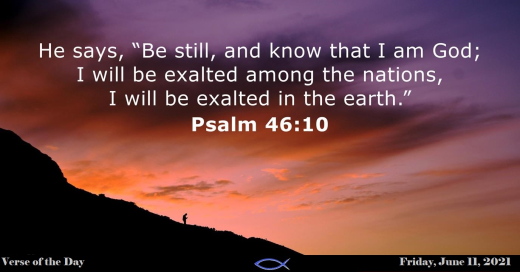 Read all of Psalm 46