You, my brothers and sisters, were called to be free. But do not use your freedom to indulge the flesh; rather, serve one another humbly in love.

Life Lessons: We are free in Christ, but we do not have license to sin because it no longer fits who we are as the children of God. Rather, we have been set free from every encumbrance to become who He created us to be—those who build up and encourage others through creative, Spirit-led ministries. Why would anyone who truly loves Jesus want to use his or her Cross-bought freedom to do anything that disgraces His name?

7 “In the greatness of your majesty
you threw down those who opposed you.
You unleashed your burning anger;
it consumed them like stubble.
8 By the blast of your nostrils
the waters piled up.
The surging waters stood up like a wall;
the deep waters congealed in the heart of the sea.
9 The enemy boasted,
‘I will pursue, I will overtake them.
I will divide the spoils;
I will gorge myself on them.
I will draw my sword
and my hand will destroy them.’
10 But you blew with your breath,
and the sea covered them.
They sank like lead
in the mighty waters.
11 Who among the gods
is like you, Lord?
Who is like you—
majestic in holiness,
awesome in glory,
working wonders?

Commentary
This song is the most ancient we know of. It is a holy song, to the honor of God, to exalt his name, and celebrate his praise, and his only, not in the least to magnify any man. Holiness to the Lord is in every part of it. It may be considered as typical, and prophetical of the final destruction of the enemies of the church. Happy the people whose God is the Lord. They have work to do, temptations to grapple with, and afflictions to bear, and are weak in themselves; but his grace is their strength. They are often in sorrow, but in him they have comfort; he is their song. Sin, and death, and hell threaten them, but he is, and will be their salvation. The Lord is a God of almighty power, and woe to those that strive with their Maker! He is a God of matchless perfection; he is glorious in holiness; his holiness is his glory. His holiness appears in the hatred of sin, and his wrath against obstinate sinners. It appears in the deliverance of Israel, and his faithfulness to his own promise. He is fearful in praises; that which is matter of praise to the servants of God, is very dreadful to his enemies. He is doing wonders, things out of the common course of nature; wondrous to those in whose favor they are wrought, who are so unworthy, that they had no reason to expect them. There were wonders of power and wonders of grace; in both, God was to be humbly adored.

A Reading from the Gospel of John
John 7:37-39
The Living Water of the Spirit
7:37 On the last and greatest day of the festival, Jesus stood and said in a loud voice, “Let anyone who is thirsty come to me and drink. 38 Whoever believes in me, as Scripture has said, rivers of living water will flow from within them.” 39 By this he meant the Spirit, whom those who believed in him were later to receive. Up to that time the Spirit had not been given, since Jesus had not yet been glorified.

Commentary
On the last day of the feast of tabernacles, the Jews drew water and poured it out before the Lord. It is supposed that Christ alluded to this. If any man desires to be truly and for ever happy, let him apply to Christ, and be ruled by him. This thirst means strong desires after spiritual blessings, which nothing else can satisfy; so the sanctifying and comforting influences of the Holy Spirit, were intended by the waters which Jesus called on them to come to Him and drink. The comfort flows plentifully and constantly as a river; strong as a stream to bear down the opposition of doubts and fears. There is a fullness in Christ, of grace for grace. The Spirit dwelling and working in believers, is as a fountain of living, running water, out of which plentiful streams flow, cooling and cleansing as water. The miraculous gifts of the Holy Spirit we do not expect, but for his more common and more valuable influences we may apply. These streams have flowed from our glorified Redeemer, down to this age, and to the remote corners of the earth. May we be anxious to make them known to others.

Today’s Lectionary Readings are selected from the Revised Common Lectionary Daily Readings, a three-year cyclical lectionary. We are currently in Year B. Beginning with the first Sunday of Advent in 2021, we will be in Year C. The year which ended at Advent 2020 was Year A. These readings complement the Sunday and festival readings: Thursday through Saturday readings help prepare the reader for the Sunday ahead; Monday through Wednesday readings help the reader reflect and digest what they heard in worship. Revised Common Lectionary Daily Readings, copyright © 2005 Consultation on Common Texts. www.commontexts.org. The Bible texts of the Old Testament, Epistle, and Gospel lessons are from The Holy Bible, New International Version®, NIV® Copyright ©1973, 1978, 1984, 2011 by Biblica, Inc.® Used by permission. All rights reserved worldwide. Commentaries from Matthew Henry's Concise Commentary on the Bible.
Posted by Kenny at 1:10:00 AM 3 comments: 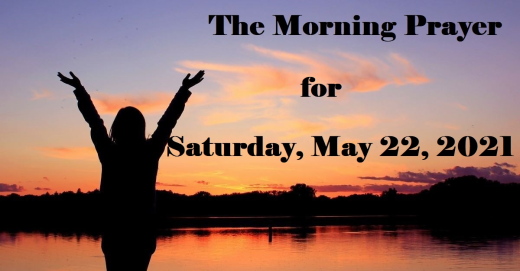 The Morning Prayer
Saturday, May 22, 2021
I will declare your name to my brothers; in the congregation I will praise you.
— Psalm 22:22 (NIV)
Lord our God, Almighty Father in heaven, we stand before you as your children, whom you want to protect through the need of our time, through all sin and death. We praise you for giving us so much peace in an age full of trouble, and for granting us the assurance of your help. Even when we suffer, we do not want to remain in the darkness of suffering but want to rise up to praise and glorify you. For your kingdom is coming; it is already at hand. Your kingdom comforts and helps us and points the way for the whole world, that your will may be done on earth as in heaven. Amen.
Posted by Kenny at 1:08:00 AM No comments: 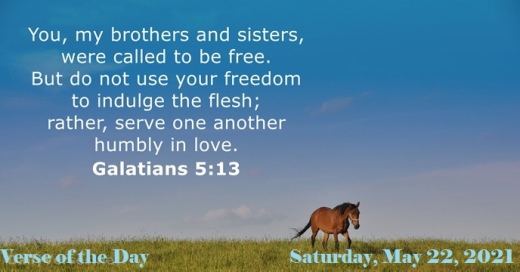 You, my brothers and sisters, were called to be free. But do not use your freedom to indulge the flesh; rather, serve one another humbly in love.

Life Lessons: We are free in Christ, but we do not have license to sin because it no longer fits who we are as the children of God. Rather, we have been set free from every encumbrance to become who He created us to be—those who build up and encourage others through creative, Spirit-led ministries. Why would anyone who truly loves Jesus want to use his or her Cross-bought freedom to do anything that disgraces His name?

Read all of Galatians 5