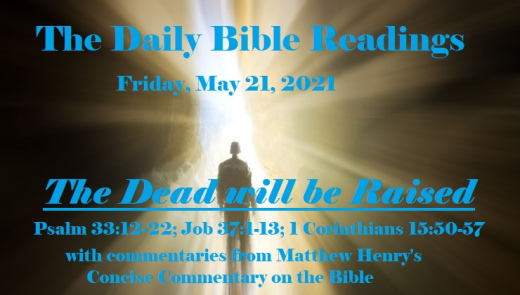 A Reading from the Books of Wisdom
Job 37:1-13
The Powerful Breath of God
1 “At this my heart pounds
and leaps from its place.
2 Listen! Listen to the roar of his voice,
to the rumbling that comes from his mouth.
3 He unleashes his lightning beneath the whole heaven
and sends it to the ends of the earth.
4 After that comes the sound of his roar;
he thunders with his majestic voice.
When his voice resounds,
he holds nothing back.
5 God’s voice thunders in marvelous ways;
he does great things beyond our understanding.
6 He says to the snow, ‘Fall on the earth,’
and to the rain shower, ‘Be a mighty downpour.’
7 So that everyone he has made may know his work,
he stops all people from their labor.
8 The animals take cover;
they remain in their dens.
9 The tempest comes out from its chamber,
the cold from the driving winds.
10 The breath of God produces ice,
and the broad waters become frozen.
11 He loads the clouds with moisture;
he scatters his lightning through them.
12 At his direction they swirl around
over the face of the whole earth
to do whatever he commands them.
13 He brings the clouds to punish people,
or to water his earth and show his love.

Commentary
The changes of the weather are the subject of a great deal of our thoughts and common talk; but how seldom do we think and speak of these things, as Elihu, with a regard to God, the director of them! We must notice the glory of God, not only in the thunder and lightning, but in the more common and less awful changes of the weather; as the snow and rain. Nature directs all creatures to shelter themselves from a storm; and shall man only be unprovided with a refuge? Oh that men would listen to the voice of God, who in many ways warns them to flee from the wrath to come; and invites them to accept his salvation, and to be happy. The ill opinion which men entertain of the Divine direction, peculiarly appears in their murmurs about the weather, though the whole result of the year proves the folly of their complaints. Believers should avoid this; no days are bad as God makes them, though we make many bad by our sins.

56 The sting of death is sin, and the power of sin is the law. 57 But thanks be to God! He gives us the victory through our Lord Jesus Christ.

Commentary
All the saints should not die, but all would be changed. In the gospel, many truths, before hidden in mystery, are made known. Death never shall appear in the regions to which our Lord will bear his risen saints. Therefore let us seek the full assurance of faith and hope, that in the midst of pain, and in the prospect of death, we may think calmly on the horrors of the tomb; assured that our bodies will there sleep, and in the mean time our souls will be present with the Redeemer. Sin gives death all its hurtful power. The sting of death is sin; but Christ, by dying, has taken out this sting; he has made atonement for sin, he has obtained remission of it. The strength of sin is the law. None can answer its demands, endure its curse, or do away his own transgressions. Hence terror and anguish. And hence death is terrible to the unbelieving and the impenitent. Death may seize a believer, but it cannot hold him in its power. How many springs of joy to the saints, and of thanksgiving to God, are opened by the death and resurrection, the sufferings and conquests of the Redeemer! In 1 Corinthians 15:58, we have an exhortation, that believers should be steadfast, firm in the faith of that gospel which the apostle preached, and they received. Also, to be unmovable in their hope and expectation of this great privilege, of being raised incorruptible and immortal. And to abound in the work of the Lord, always doing the Lord's service, and obeying the Lord's commands. May Christ give us faith, and increase our faith, that we may not only be safe, but joyful and triumphant. 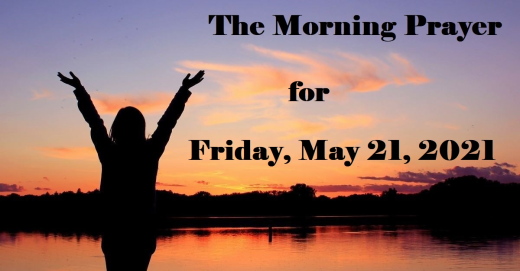 The Morning Prayer
Friday, May 21, 2021
I am not ashamed of the gospel, because it is the power of God for the salvation of everyone who believes: first for the Jew, then for the Gentile. For in the gospel a righteousness from God is revealed, a righteousness that is by faith from first to last, just as it is written: “The righteous will live by faith.”
— Romans 1:16-17 (NIV)
Lord our God, you have revealed your righteousness to us in the gospel, your righteousness that comes to us through faith and continues in faith. Grant that we may understand your righteousness and live by it even in a crooked generation. Then to our joy the gospel will bear fruit. Protect us in the midst of temptation and conflicting opinions so that we are raised above them and remain free, with our thoughts on you and your true and loving righteousness. Your righteousness gives us hope for the many, many people who still need help to realize that their lives are not of passing value but of eternal worth. Amen.
Posted by Kenny at 1:08:00 AM No comments: 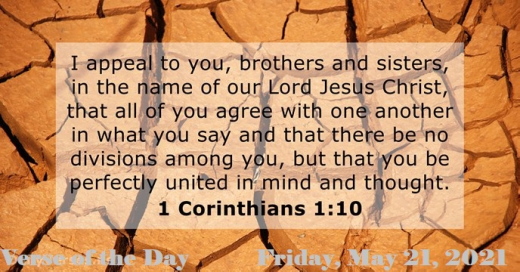 Read all of 1 Corinthians 1