May the God who gives endurance and encouragement give you the same attitude of mind toward each other that Christ Jesus had, so that with one mind and one voice you may glorify the God and Father of our Lord Jesus Christ.

Study Note: Paul urges the strong and the weak, despite their differing views on these nonessential issues, to pursue loving, spiritual harmony in regard to matters on which the Bible is silent. Our unity should be both real (one mind) and apparent (one mouth). But the consummate purpose of unity is not to please other believers but to glorify God.

A Reading from the Pentateuch
Genesis 2:4b-7
God Breathes Life into Humankind
2:4b when the Lord God made the earth and the heavens.

Commentary
Here is a name given to the Creator, “Jehovah.” Where the word “LORD” is printed in capital letters in our English Bibles, in the original it is “Jehovah.” Jehovah is that name of God, which denotes that he alone has his being of himself, and that he gives being to all creatures and things. Further notice is taken of plants and herbs, because they were made and appointed to be food for man. The earth did not bring forth its fruits of itself: this was done by Almighty power. Thus grace in the soul grows not of itself in nature's soil, but is the work of God. Rain also is the gift of God; it came not till the Lord God caused it. Though God works by means, yet when he pleases he can do his own work without them; and though we must not tempt God in the neglect of means, we must trust God, both in the use and in the want of means. Some way or other, God will water the plants of his own planting. Divine grace comes down like the dew, and waters the church without noise. Man was made of the small dust, such as is on the surface of the earth. The soul was not made of the earth, as the body: pity then that it should cleave to the earth, and mind earthly things. To God we must shortly give an account, how we have employed these souls; and if it be found that we have lost them, though it were to gain the world, we are undone for ever! Fools despise their own souls, by caring for their bodies before their souls.

If there is a natural body, there is also a spiritual body. 45 So it is written: “The first man Adam became a living being”; the last Adam, a life-giving spirit. 46 The spiritual did not come first, but the natural, and after that the spiritual. 47 The first man was of the dust of the earth; the second man is of heaven. 48 As was the earthly man, so are those who are of the earth; and as is the heavenly man, so also are those who are of heaven. 49 And just as we have borne the image of the earthly man, so shall we bear the image of the heavenly man.

Commentary
1. How are the dead raised up? that is, by what means? How can they be raised? 2. As to the bodies which shall rise. Will it be with the like shape, and form, and stature, and members, and qualities? The former objection is that of those who opposed the doctrine, the latter of curious doubters. To the first the answer is, This was to be brought about by Divine power; that power which all may see does somewhat like it, year after year, in the death and revival of the corn. It is foolish to question the Almighty power of God to raise the dead, when we see it every day quickening and reviving things that are dead. To the second inquiry; The grain undergoes a great change; and so will the dead, when they rise and live again. The seed dies, though a part of it springs into new life, though how it is we cannot fully understand. The works of creation and providence daily teach us to be humble, as well as to admire the Creator's wisdom and goodness. There is a great variety among other bodies, as there is among plants. There is a variety of glory among heavenly bodies. The bodies of the dead, when they rise, will be fitted for the heavenly bodies. The bodies of the dead, when they rise, will be fitted for the heavenly state; and there will be a variety of glories among them. Burying the dead, is like committing seed to the earth, that it may spring out of it again. Nothing is more loathsome than a dead body. But believers shall at the resurrection have bodies, made fit to be for ever united with spirits made perfect. To God all things are possible. He is the Author and Source of spiritual life and holiness, unto all his people, by the supply of his Holy Spirit to the soul; and he will also quicken and change the body by his Spirit. The dead in Christ shall not only rise, but shall rise thus gloriously changed. The bodies of the saints, when they rise again, will be changed. They will be then glorious and spiritual bodies, fitted to the heavenly world and state, where they are ever afterwards to dwell. The human body in its present form, and with its wants and weaknesses, cannot enter or enjoy the kingdom of God. Then let us not sow to the flesh, of which we can only reap corruption. And the body follows the state of the soul. He, therefore, who neglects the life of the soul, casts away his present good; he who refuses to live to God, squanders all he has. 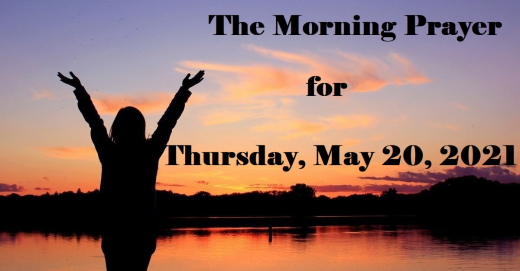 The Morning Prayer
Thursday, May 20, 2021
Such prayer for all is good and welcomed before God our Savior, since he wants all people to be saved and to come to a knowledge of the truth.
— 1 Timothy 2:3-4 (NET)
Lord our God, give us your Spirit, we pray, that we may learn to understand what we are and what tasks you have set for us. We thank you for all the light you give us. Grant that we and many others may come closer to knowledge of the truth and be at peace about all that belongs in your hands, our Father in heaven. Keep us now and forevermore in your almighty hand. May we know your goodness and the blessing it brings. For through your goodness we can endure even the hardest days and be victorious in the battle of life. Amen.
Posted by Kenny at 1:08:00 AM No comments: 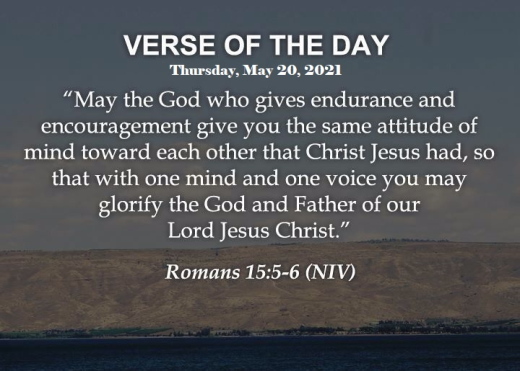 May the God who gives endurance and encouragement give you the same attitude of mind toward each other that Christ Jesus had, so that with one mind and one voice you may glorify the God and Father of our Lord Jesus Christ.

Study Note: Paul urges the strong and the weak, despite their differing views on these nonessential issues, to pursue loving, spiritual harmony in regard to matters on which the Bible is silent. Our unity should be both real (one mind) and apparent (one mouth). But the consummate purpose of unity is not to please other believers but to glorify God.

Read all of Romans 15