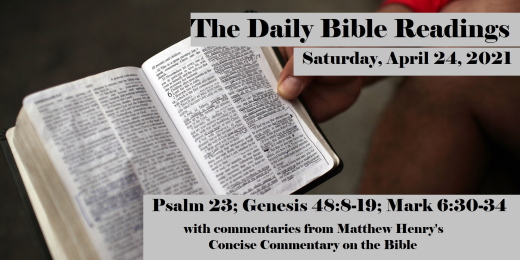 Today’s Readings:
A Reading from the Book of Psalms
Psalm 23
God Our Shepherd
1 The Lord is my shepherd, I lack nothing.
2    He makes me lie down in green pastures,
he leads me beside quiet waters,
3    he refreshes my soul.
He guides me along the right paths
for his name’s sake.
4 Even though I walk
through the darkest valley,
I will fear no evil,
for you are with me;
your rod and your staff,
they comfort me.

5 You prepare a table before me
in the presence of my enemies.
You anoint my head with oil;
my cup overflows.
6 Surely your goodness and love will follow me
all the days of my life,
and I will dwell in the house of the Lord
forever.

Commentary
“The Lord is my shepherd.” In these words, the believer is taught to express his satisfaction in the care of the great Pastor of the universe, the Redeemer and Preserver of men. With joy he reflects that he has a shepherd, and that shepherd is Jehovah. A flock of sheep, gentle and harmless, feeding in verdant pastures, under the care of a skillful, watchful, and tender shepherd, forms an emblem of believers brought back to the Shepherd of their souls. The greatest abundance is but a dry pasture to a wicked man, who relishes in it only what pleases the senses; but to a godly man, who by faith tastes the goodness of God in all his enjoyments, though he has but little of the world, it is a green pasture. The Lord gives quiet and contentment in the mind, whatever the lot is. Are we blessed with the green pastures of the ordinances, let us not think it enough to pass through them, but let us abide in them. The consolations of the Holy Spirit are the still waters by which the saints are led; the streams which flow from the Fountain of living waters. Those only are led by the still waters of comfort, who walk in the paths of righteousness. The way of duty is the truly pleasant way. The work of righteousness in peace. In these paths we cannot walk, unless. God lead us into them, and lead us on in them. Discontent and distrust proceed from unbelief; an unsteady walk is the consequence: let us then simply trust our Shepherd's care, and hearken to his voice. The valley of the shadow of death may denote the most severe and terrible affliction, or dark dispensation of providence, that the psalmist ever could come under. Between the part of the flock on earth and that which is gone to heaven, death lies like a dark valley that must be passed in going from one to the other. But even in this there are words which lessen the terror. It is but the shadow of death: the shadow of a serpent will not sting, nor the shadow of a sword kill. It is a valley, deep indeed, and dark, and miry; but valleys are often fruitful, and so is death itself fruitful of comforts to God's people. It is a walk through it: they shall not be lost in this valley, but get safe to the mountain on the other side. Death is a king of terrors, but not to the sheep of Christ. When they come to die, God will rebuke the enemy; he will guide them with his rod, and sustain them with his staff. There is enough in the gospel to comfort the saints when dying, and underneath them are the everlasting arms. The Lord's people feast at his table, upon the provisions of his love. Satan and wicked men are not able to destroy their comforts, while they are anointed with the Holy Spirit, and drink of the cup of salvation which is ever full. Past experience teaches believers to trust that the goodness and mercy of God will follow them all the days of their lives, and it is their desire and determination, to seek their happiness in the service of God here, and they hope to enjoy his love for ever in heaven. While here, the Lord can make any situation pleasant, by the anointing of his Spirit and the joys of his salvation. But those that would be satisfied with the blessings of his house, must keep close to the duties of it.

A Reading from the Old Testament
Genesis 48:8-19
God Has Been My Shepherd
48:8 When Israel saw the sons of Joseph, he asked, “Who are these?”

9 “They are the sons God has given me here,” Joseph said to his father.

Then Israel said, “Bring them to me so I may bless them.”

10 Now Israel’s eyes were failing because of old age, and he could hardly see. So Joseph brought his sons close to him, and his father kissed them and embraced them.

11 Israel said to Joseph, “I never expected to see your face again, and now God has allowed me to see your children too.”

12 Then Joseph removed them from Israel’s knees and bowed down with his face to the ground. 13 And Joseph took both of them, Ephraim on his right toward Israel’s left hand and Manasseh on his left toward Israel’s right hand, and brought them close to him. 14 But Israel reached out his right hand and put it on Ephraim’s head, though he was the younger, and crossing his arms, he put his left hand on Manasseh’s head, even though Manasseh was the firstborn.

15 Then he blessed Joseph and said,

“May the God before whom my fathers
Abraham and Isaac walked faithfully,
the God who has been my shepherd
all my life to this day,
16 the Angel who has delivered me from all harm
—may he bless these boys.
May they be called by my name
and the names of my fathers Abraham and Isaac,
and may they increase greatly
on the earth.”

Commentary
The two good men own God in their comforts. Joseph says, They are my sons whom God has given me. Jacob says, God hath showed me thy seed. Comforts are doubly sweet to us when we see them coming from God's hand. He not only prevents our fears, but exceeds our hopes. Jacob mentions the care the Divine providence had taken of him all his days. A great deal of hardship he had known in his time, but God kept him from the evil of his troubles. Now he was dying, he looked upon himself as redeemed from all sin and sorrow for ever. Christ, the Angel of the covenant, redeems from all evil. Deliverances from misery and dangers, by the Divine power, coming through the ransom of the blood of Christ, in Scripture are often called redemption. In blessing Joseph's sons, Jacob crossed hands. Joseph was willing to support his first-born, and would have removed his father's hands. But Jacob acted neither by mistake, nor from a partial affection to one more than the other; but from a spirit of prophecy, and by the Divine counsel. God, in bestowing blessings upon his people, gives more to some than to others, more gifts, graces, and comforts, and more of the good things of this life. He often gives most to those that are least likely. He chooses the weak things of the world; he raises the poor out of the dust. Grace observes not the order of nature, nor does God prefer those whom we think fittest to be preferred, but as it pleases him. How poor are they who have no riches but those of this world! How miserable is a death-bed to those who have no well-grounded hope of good, but dreadful apprehensions of evil, and nothing but evil for ever!

A Reading from the New Testament
Mark 6:30-34
Like Sheep Without A Shepherd
6:30 The apostles gathered around Jesus and reported to him all they had done and taught. 31 Then, because so many people were coming and going that they did not even have a chance to eat, he said to them, “Come with me by yourselves to a quiet place and get some rest.”

32 So they went away by themselves in a boat to a solitary place. 33 But many who saw them leaving recognized them and ran on foot from all the towns and got there ahead of them. 34 When Jesus landed and saw a large crowd, he had compassion on them, because they were like sheep without a shepherd. So he began teaching them many things.

Commentary
Let not ministers do any thing or teach any thing, but what they are willing should be told to their Lord. Christ notices the frights of some, and the toils of others of his disciples, and provides rest for those that are tired, and refuge for those that are terrified.

The Bible texts of the Old Testament, Epistle, and Gospel lessons are from The Holy Bible, New International Version®, NIV® Copyright ©1973, 1978, 1984, 2011 by Biblica, Inc.® Used by permission. All rights reserved worldwide. Commentaries from Matthew Henry's Concise Commentary on the Bible. The Daily Bible Readings are selected from the Revised Common Lectionary Daily Readings, a three-year cyclical lectionary. We are currently in Year B. Beginning with the first Sunday of Advent in 2021, we will be in Year C. The year which ended at Advent 2020 was Year A. These readings complement the Sunday and festival readings: Thursday through Saturday readings help prepare the reader for the Sunday ahead; Monday through Wednesday readings help the reader reflect and digest what they heard in worship. Revised Common Lectionary Daily Readings, copyright © 2005 Consultation on Common Texts. www.commontexts.org
Posted by Kenny at 1:10:00 AM No comments: 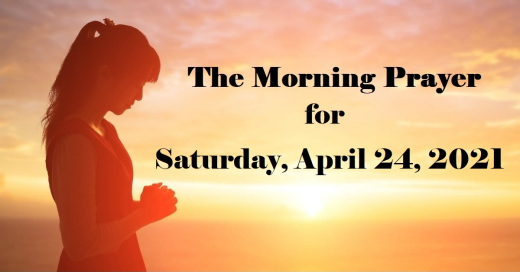 The Morning Prayer
Saturday, April 24, 2021
And so we have the prophetic word confirmed, which you do well to heed as a light that shines in a dark place, until the day dawns and the morning star rises in your hearts.
— 2 Peter 1:19 (NIV)
Lord God, we thank you for giving us light here on earth, where it is so often completely dark. But in the darkness the name of Jesus Christ shines out as the prophetic Word: “Be comforted. After darkness comes light, after night comes day!” We thank you for this light. In joy we thank you, for we have experienced that Jesus lives and comes to meet each one, bringing victory over enemy powers. In the name of Jesus Christ and in his name alone we ask you to remember the needs of our time. We do not want anything that comes from ourselves. We do not want any earthly peace. We want your peace, Lord God, the peace in which everything becomes new, born anew even in suffering, to the eternal glory of your name. Amen.
Posted by Kenny at 1:08:00 AM No comments: 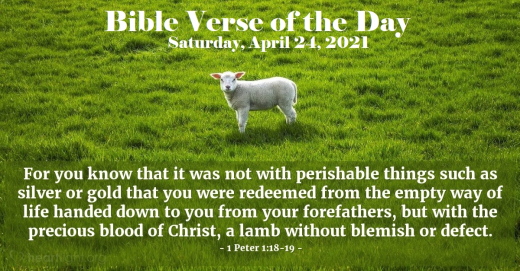 Holy Bible, New International Version®, NIV®
Posted by Kenny at 1:07:00 AM No comments: