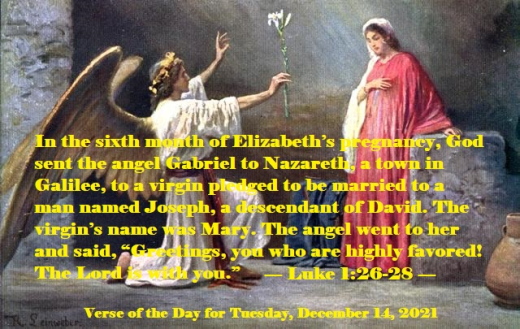 In the sixth month of Elizabeth’s pregnancy, God sent the angel Gabriel to Nazareth, a town in Galilee, to a virgin pledged to be married to a man named Joseph, a descendant of David. The virgin’s name was Mary. The angel went to her and said, “Greetings, you who are highly favored! The Lord is with you.”

The announcement in Nazareth shows that Mary came from humble, agrarian roots. Galilee was not a respected region. It was hardly the expected locale for one sent from God (John 7:41). Gabriel, the same angel who spoke to Zechariah, brings the divine message. Luke identifies Mary as a virgin, engaged to Joseph; that is, she was pledged to him sometime in the previous year. A Jewish betrothal involved two steps: the formal engagement including a contract and exchange of a bridal price, and then about a year later, a wedding (Deut. 22:23).

Read all of Luke Chapter 1