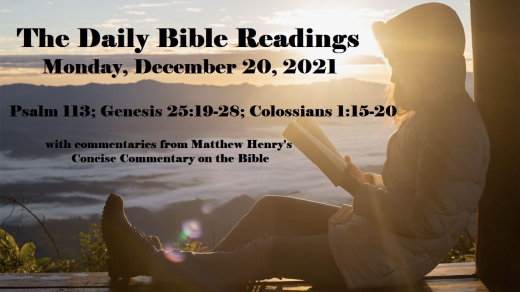 In today’s lectionary readings, our psalm is the first of the “Hallel” psalms, which were sung at the three Feasts of the Passover, Pentecost, and Tabernacles. These were the feasts that Jewish males were required to attend annually in Jerusalem. This psalm calls the congregation to praise the Lord (vv. 1-3)—then speaks of the Lord’s glory (vv. 4-6)—reminds the congregation that the Lord does great things for the poor and other vulnerable people (vv. 7-9ab)—and finally calls the congregation again to praise the Lord (v. 9c). Our reading in Genesis is the account of Isaac, the son of Abraham. When Isaac was forty years old, he married Rebekah, the daughter of Bethuel the Aramean from Paddan Aram and sister of Laban the Aramean. Isaac prayed to the Lord on behalf of his wife because she was childless. The Lord answered his prayer, and his wife Rebekah became pregnant with twins. The Lord said to her, “Two nations are in your womb, and two peoples from within you will be separated; one people will be stronger than the other, and the older will serve the younger.” In our epistle reading, Paul comes to the heart of the gospel and the heart of his letter to the Christians in Colossae. Paul tells us why Jesus is great and why we must follow him and serve him. Paul begins with the amazing point that Jesus is the image of the invisible God. Jesus reveals God perfectly. The point is simply this: if you have seen Jesus, you have seen the invisible God. In our verse of the day, the story of Jesus’ birth began during the reign of one of the most remarkable men of ancient history, Caesar Augustus. Caesar Augustus was the first Roman emperor. During his reign, a decree went out from Caesar Augustus that all the world should be registered. Being obliged by the emperor’s decree, Joseph, along with Mary, travel from Nazareth to Bethlehem, a three-day journey of more than 70 miles, to register in the census.

Today’s Lectionary Readings:
From the Psalter
Psalm 113
Praise to God who Lifts Up the Lowly

4 The Lord is exalted over all the nations,
his glory above the heavens.
5 Who is like the Lord our God,
the One who sits enthroned on high,
6 who stoops down to look
on the heavens and the earth?

7 He raises the poor from the dust
and lifts the needy from the ash heap;
8 he seats them with princes,
with the princes of his people.
9 He settles the childless woman in her home
as a happy mother of children.

God has praise from his own people. They have most reason to praise him; for those who attend him as his servants, know him best, and receive most of his favors, and it is easy, pleasant work to speak well of their Master. God's name ought to be praised in every place, from east to west. Within this wide space the Lord's name is to be praised; it ought to be so, though it is not. Ere long it will be, when all nations shall come and worship before him. God is exalted above all blessing and praise. We must therefore say, with holy admiration, Who is like unto the Lord our God? How condescending in him to behold the things in the earth! And what amazing condescension was it for the Son of God to come from heaven to earth, and take our nature upon him, that he might seek and save those that were lost! How vast his love in taking upon him the nature of man, to ransom guilty souls! God sometimes makes glorious his own wisdom and power, when, having some great work to do, he employs those least likely, and least thought of for it by themselves or others. The apostles were sent from fishing to be fishers of men. And this is God's constant method in his kingdom of grace. He takes men, by nature beggars, and even traitors, to be his favorites, his children, kings and priests unto him; and numbers them with the princes of his chosen people. He gives us all our comforts, which are generally the more welcome when long delayed, and no longer expected. Let us pray that those lands which are yet barren, may speedily become fruitful, and produce many converts to join in praising the Lord.

From the Pentateuch
Genesis 25:19-28
Rebekah Bears Jacob and Esau

25:19 This is the account of the family line of Abraham’s son Isaac.

Abraham became the father of Isaac, 20 and Isaac was forty years old when he married Rebekah daughter of Bethuel the Aramean from Paddan Aram and sister of Laban the Aramean.

21 Isaac prayed to the Lord on behalf of his wife, because she was childless. The Lord answered his prayer, and his wife Rebekah became pregnant. 22 The babies jostled each other within her, and she said, “Why is this happening to me?” So she went to inquire of the Lord.

“Two nations are in your womb,
and two peoples from within you will be separated;
one people will be stronger than the other,
and the older will serve the younger.”

24 When the time came for her to give birth, there were twin boys in her womb. 25 The first to come out was red, and his whole body was like a hairy garment; so they named him Esau. 26 After this, his brother came out, with his hand grasping Esau’s heel; so he was named Jacob. Isaac was sixty years old when Rebekah gave birth to them.

27 The boys grew up, and Esau became a skillful hunter, a man of the open country, while Jacob was content to stay at home among the tents. 28 Isaac, who had a taste for wild game, loved Esau, but Rebekah loved Jacob.

Verses 19-26: Isaac seems not to have been much tried, but to have spent his days in quietness. Jacob and Esau were prayed for; their parents, after being long childless, obtained them by prayer. The fulfillment of God's promise is always sure, yet it is often slow. The faith of believers is tried, their patience exercised, and mercies long waited for are more welcome when they come. Isaac and Rebekah kept in view the promise of all nations being blessed in their posterity, therefore were not only desirous of children, but anxious concerning every thing which seemed to mark their future character. In all our doubts we should inquire of the Lord by prayer. In many of our conflicts with sin and temptation, we may adopt Rebekah's words, "If it be so, why am I thus?" If a child of God, why so careless or carnal? If not a child of God, why so afraid of, or so burdened with sin?

Verses 27-28: Esau hunted the beasts of the field with dexterity and success, till he became a conqueror, ruling over his neighbors. Jacob was a plain man, one that liked the true delights of retirement, better than all pretended pleasures. He was a stranger and a pilgrim in his spirit, and a shepherd all his days. Isaac and Rebekah had but these two children, one was the father's darling, and the other the mother's. And though godly parents must feel their affections most drawn over towards a godly child, yet they will not show partiality. Let their affections lead them to do what is just and equal to every child, or evils will arise.

From the Epistles
Colossians 1:15-20
Jesus Christ the Firstborn of Creation

1:15 The Son is the image of the invisible God, the firstborn over all creation. 16 For in him all things were created: things in heaven and on earth, visible and invisible, whether thrones or powers or rulers or authorities; all things have been created through him and for him. 17 He is before all things, and in him all things hold together. 18 And he is the head of the body, the church; he is the beginning and the firstborn from among the dead, so that in everything he might have the supremacy. 19 For God was pleased to have all his fullness dwell in him, 20 and through him to reconcile to himself all things, whether things on earth or things in heaven, by making peace through his blood, shed on the cross.

Christ in his human nature, is the visible discovery of the invisible God, and he that hath seen Him hath seen the Father. Let us adore these mysteries in humble faith, and behold the glory of the Lord in Christ Jesus. He was born or begotten before all the creation, before any creature was made; which is the Scripture way of representing eternity, and by which the eternity of God is represented to us. All things being created by Him, were created for him; being made by his power, they were made according to his pleasure, and for his praise and glory. He not only created them all at first, but it is by the word of his power that they are upheld. Christ as Mediator is the Head of the body, the church; all grace and strength are from him; and the church is his body. All fullness dwells in him; a fullness of merit and righteousness, of strength and grace for us. God showed his justice in requiring full satisfaction. This mode of redeeming mankind by the death of Christ was most suitable. Here is presented to our view the method of being reconciled. And that, notwithstanding the hatred of sin on God's part, it pleased God to reconcile fallen man to himself.