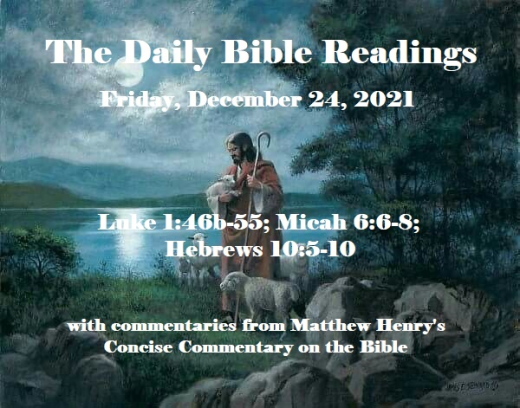 In today’s lectionary readings, our psalm comes from the gospel of Luke. Luke is the only one to speak of Mary’s song. Mary is visiting with her cousin Elizabeth, the mother of John the Baptist. Upon that visit, Elizabeth asked, “How could this happen to me, that the mother of my Lord should come to me?” Mary’s song is a song of praise. She is not just sharing her thoughts with her cousin. She says that the Lord is great, and her spirit is rejoicing with the news that has come to her. Today, Mary’s song is called The Magnificat, meaning “my soul magnifies the Lord” in Latin.

In our reading in Micah, Micah makes a proclamation from God concerning His people Israel. He asks them what he has done and calls for them to respond. He reminds them of His faithfulness, protecting them from harm from such people as Balak and Balaam. Micah gives the response of the people to God. Micah then responds, giving a direct answer to their questions. He addresses the issues in which they are seemingly so ignorant and foolish to perceive as truths that some kind of external ritual or sacrifice is good enough to satisfy God. Micah states that God has already shown them what He expects of them and that they should not have asked the question in the first place.

In our epistle reading, although Jesus’ learned obedience from the things he suffered,’ which implies that he grew in his understanding of the divine will, the lesson for today wants us to be sure that even at the moment of the incarnation, Jesus was thoroughly committed to carrying it out.

In our verse of the day, the shepherds living out in the fields had just received an angelic visit and made haste to verify with sight what their ears had heard.

So they hurried off and found Mary and Joseph, and the baby, who was lying in the manger. When they had seen him, they spread the word concerning what had been told them about this child, and all who heard it were amazed at what the shepherds said to them. But Mary treasured up all these things and pondered them in her heart. The shepherds returned, glorifying and praising God for all the things they had heard and seen, which were just as they had been told.

These shepherds are good examples for us to imitate today. They received by faith the message God sent them and then responded with immediate obedience. After finding the Baby, they reported the good news to others, “glorifying and praising God” (2:20). They took the place of the angels (vv. 13, 14)! Then they humbly returned to their duties, new men going back to the same old job.

For some reason, shepherds were not permitted to testify in court, but God used some humble shepherds to be the first human witnesses that prophecy had been fulfilled and the Messiah had been born. As a result, “all those who heard it were amazed at what the shepherds said to them” (v. 18).

The angels have never experienced the grace of God, so they can’t bear witness as we can. Telling others about the Savior is our solemn obligation as well as our great privilege. We who are believers must be faithful!

Today’s Lectionary Readings:
From the Gospels
Luke 1:46b-55
My Soul Gives Glory to God

46b “My soul glorifies the Lord
47    and my spirit rejoices in God my Savior,
48 for he has been mindful
of the humble state of his servant.
From now on all generations will call me blessed,
49    for the Mighty One has done great things for me—
holy is his name.
50 His mercy extends to those who fear him,
from generation to generation.
51 He has performed mighty deeds with his arm;
he has scattered those who are proud in their inmost thoughts.
52 He has brought down rulers from their thrones
but has lifted up the humble.
53 He has filled the hungry with good things
but has sent the rich away empty.
54 He has helped his servant Israel,
remembering to be merciful
55 to Abraham and his descendants forever,
just as he promised our ancestors.”

It is very good for those who have the work of grace begun in their souls, to communicate one to another. On Mary's arrival, Elisabeth was conscious of the approach of her who was to be the mother of the great Redeemer. At the same time she was filled with the Holy Ghost, and under his influence declared that Mary and her expected child were most blessed and happy, as peculiarly honored of and dear to the Most High God. Mary, animated by Elisabeth's address, and being also under the influence of the Holy Ghost, broke out into joy, admiration, and gratitude. She knew herself to be a sinner who needed a Savior, and that she could no otherwise rejoice in God than as interested in his salvation through the promised Messiah. Those who see their need of Christ, and are desirous of righteousness and life in him, he fills with good things, with the best things; and they are abundantly satisfied with the blessings he gives. He will satisfy the desires of the poor in spirit who long for spiritual blessings, while the self-sufficient shall be sent empty away.

6 With what shall I come before the Lord
and bow down before the exalted God?
Shall I come before him with burnt offerings,
with calves a year old?
7 Will the Lord be pleased with thousands of rams,
with ten thousand rivers of olive oil?
Shall I offer my firstborn for my transgression,
the fruit of my body for the sin of my soul?
8 He has shown you, O mortal, what is good.
And what does the Lord require of you?
To act justly and to love mercy
and to walk humbly with your God.

These verses seem to contain the substance of Balak's consultation with Balaam how to obtain the favor of Israel's God. Deep conviction of guilt and wrath will put men upon careful inquiries after peace and pardon, and then there begins to be some ground for hope of them. In order to God's being pleased with us, our care must be for an interest in the atonement of Christ, and that the sin by which we displease him may be taken away. What will be a satisfaction to God's justice? In whose name must we come, as we have nothing to plead as our own? In what righteousness shall we appear before him? The proposals betray ignorance, though they show zeal. They offer that which is very rich and costly. Those who are fully convinced of sin, and of their misery and danger by reason of it, would give all the world, if they had it, for peace and pardon. Yet they do not offer aright. The sacrifices had value from their reference to Christ; it was impossible that the blood of bulls and goats should take away sin. And all proposals of peace, except those according to the gospel, are absurd. They could not answer the demands of Divine justice, nor satisfy the wrong done to the honor of God by sin, nor would they serve at all in place of holiness of the heart and reformation of the life. Men will part with any thing rather than their sins; but they part with nothing so as to be accepted of God, unless they do part with their sins. Moral duties are commanded because they are good for man. In keeping God's commandments there is a great reward, as well as after keeping them. God has not only made it known, but made it plain. The good which God requires of us is, not the paying a price for the pardon of sin and acceptance with God, but love to himself; and what is there unreasonable, or hard, in this? Every thought within us must be brought down, to be brought into obedience to God, if we would walk comfortably with him. We must do this as penitent sinners, in dependence on the Redeemer and his atonement. Blessed be the Lord that he is ever ready to give his grace to the humble, waiting penitent.

From the Epistles
Hebrews 10:5-10
I have Come to do your Will

10:5 Therefore, when Christ came into the world, he said:

“Sacrifice and offering you did not desire,
but a body you prepared for me;
6 with burnt offerings and sin offerings
you were not pleased.
7 Then I said, ‘Here I am—it is written about me in the scroll—
I have come to do your will, my God.’”

8 First he said, “Sacrifices and offerings, burnt offerings and sin offerings you did not desire, nor were you pleased with them”—though they were offered in accordance with the law. 9 Then he said, “Here I am, I have come to do your will.” He sets aside the first to establish the second. 10 And by that will, we have been made holy through the sacrifice of the body of Jesus Christ once for all.

The apostle having shown that the tabernacle, and ordinances of the covenant of Sinai, were only emblems and types of the gospel, concludes that the sacrifices the high priests offered continually, could not make the worshipers perfect, with respect to pardon, and the purifying of their consciences. But when "God manifested in the flesh," became the sacrifice, and his death upon the accursed tree the ransom, then the Sufferer being of infinite worth, his free-will sufferings were of infinite value. The atoning sacrifice must be one capable of consenting, and must of his own will place himself in the sinner's stead: Christ did so. The fountain of all that Christ has done for his people, is the sovereign will and grace of God. The righteousness brought in, and the sacrifice once offered by Christ, are of eternal power, and his salvation shall never be done away. They are of power to make all the comers thereunto perfect; they derive from the atoning blood, strength and motives for obedience, and inward comfort. 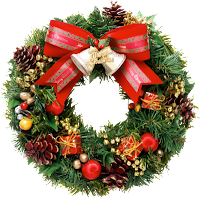