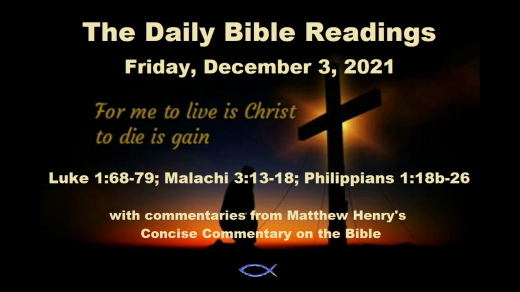 In today’s lectionary readings, the Song of Zechariah in the first chapter of Luke heralds the dawning of the light of Jesus on all who sit in darkness. Once rendered mute on account of his doubt, the father of John is now the prophet who proclaims the fulfillment of God’s promises to Israel. His is a song of Advent as we wait for the light that has already come and is still yet to come. In the book of Malachi, God’s people ask the question: What good is it to serve God? Israel spoke against the LORD harshly and sinfully—and they didn’t even realize they did so. They saw the prosperity of the proud and those who did wickedness, and they felt that it was useless to serve God as long as those who didn’t serve Him seemed to have it so good. In his letter to the Philippians, Paul rejoices even though he’s imprisoned. Paul wrote to the Philippians while under house arrest in Rome. His imprisonment, however, wasn’t the final sentence. He was waiting for Caesar to try his case, and the outcome would be freedom or death. Despite the substantial possibility of execution, Paul continued to rejoice. And his reason for joy was Christ, who Jesus is, and what Jesus means to Him. In our verse of the day, Jesus uses the phrase “I AM” in reference to Himself, providing perspective on His mission and His ministry. Jesus explicitly declares that He, Himself, is the One sent by God as He declared: “I am the bread of life. Whoever comes to me will never go hungry, and whoever believes in me will never be thirsty.”

Then Jesus declared, “I am the bread of life. Whoever comes to me will never go hungry, and whoever believes in me will never be thirsty.

The crowd’s request that Jesus give them this bread from heaven is reminiscent of the woman’s request for living water. Jesus responded by declaring himself to be the bread of life. This is the first of Jesus’ seven “I am” statements. Jesus’ use of “I am” would have caused his audience to think of God’s name in Exodus 3:14. Jesus promised to satisfy their deepest hunger and thirst if they would come to him (put their faith in him). Even though the crowd saw his miracles, they refused to believe in him. Everyone the Father gives to the Son will believe in Jesus, and he will never drive them away. Jesus made repeated references to the last day throughout the discourse.

68 “Praise be to the Lord, the God of Israel,
because he has come to his people and redeemed them.
69 He has raised up a horn of salvation for us
in the house of his servant David
70 (as he said through his holy prophets of long ago),
71 salvation from our enemies
and from the hand of all who hate us—
72 to show mercy to our ancestors
and to remember his holy covenant,
73    the oath he swore to our father Abraham:
74 to rescue us from the hand of our enemies,
and to enable us to serve him without fear
75    in holiness and righteousness before him all our days.

76 And you, my child, will be called a prophet of the Most High;
for you will go on before the Lord to prepare the way for him,
77 to give his people the knowledge of salvation
through the forgiveness of their sins,
78 because of the tender mercy of our God,
by which the rising sun will come to us from heaven
79 to shine on those living in darkness
and in the shadow of death,
to guide our feet into the path of peace.”

Zacharias uttered a prophecy concerning the kingdom and salvation of the Messiah. The gospel brings light with it; in it the day dawns. In John the Baptist it began to break, and increased apace to the perfect day. The gospel is discovering; it shows that about which we were utterly in the dark; it is to give light to those that sit in darkness, the light of the knowledge of the glory of God in the face of Jesus Christ. It is reviving; it brings light to those that sit in the shadow of death, as condemned prisoners in the dungeon. It is directing; it is to guide our feet in the way of peace, into that way which will bring us to peace at last, Romans 3:17. John gave proofs of strong faith, vigorous and holy affections, and of being above the fear and love of the world. Thus he ripened for usefulness; but he lived a retired life, till he came forward openly as the forerunner of the Messiah. Let us follow peace with all men, as well as seek peace with God and our own consciences. And if it be the will of God that we live unknown to the world, still let us diligently seek to grow strong in the grace of Jesus Christ.

From the Prophetic Books
Malachi 3:13-18
Those who Serve God

3:13 “You have spoken arrogantly against me,” says the Lord.

“Yet you ask, ‘What have we said against you?’

14 “You have said, ‘It is futile to serve God. What do we gain by carrying out his requirements and going about like mourners before the Lord Almighty? 15 But now we call the arrogant blessed. Certainly evildoers prosper, and even when they put God to the test, they get away with it.’”

17 “On the day when I act,” says the Lord Almighty, “they will be my treasured possession. I will spare them, just as a father has compassion and spares his son who serves him. 18 And you will again see the distinction between the righteous and the wicked, between those who serve God and those who do not.

Among the Jews at this time, some plainly discovered themselves to be children of the wicked one. The yoke of Christ is easy. But those who work wickedness, tempt God by presumptuous sins. Judge of things as they will appear when the doom of these proud sinners comes to be executed. Those that feared the Lord, spake kindly, for preserving and promoting mutual love, when sin thus abounded. They spake one to another, in the language of those that fear the Lord, and think on his name. As evil communications corrupt good minds and manners, so good communications confirm them. A book of remembrance was written before God. He will take care that his children perish not with those that believe not. They shall be vessels of mercy and honor, when the rest are made vessels of wrath and dishonor. The saints are God's jewels; they are dear to him. He will preserve them as his jewels, when the earth is burned up like dross. Those who now own God for theirs, he will then own for his. It is our duty to serve God with the disposition of children; and he will not have his children trained up in idleness; they must do him service from a principle of love. Even God's children stand in need of sparing mercy. All are righteous or wicked, such as serve God, or such as serve him not: all are going to heaven or to hell. We are often deceived in our opinions concerning both the one and the other; but at the bar of Christ, every man's character will be known. As to ourselves, we have need to think among which we shall have our lot; and, as to others, we must judge nothing before the time. But in the end all the world will confess that those alone were wise and happy, who served the Lord and trusted in Him.

From the Epistles
Philippians 1:18b-26
Paul Rejoices though Imprisoned

Yes, and I will continue to rejoice, 19 for I know that through your prayers and God’s provision of the Spirit of Jesus Christ what has happened to me will turn out for my deliverance. 20 I eagerly expect and hope that I will in no way be ashamed, but will have sufficient courage so that now as always Christ will be exalted in my body, whether by life or by death. 21 For to me, to live is Christ and to die is gain. 22 If I am to go on living in the body, this will mean fruitful labor for me. Yet what shall I choose? I do not know! 23 I am torn between the two: I desire to depart and be with Christ, which is better by far; 24 but it is more necessary for you that I remain in the body. 25 Convinced of this, I know that I will remain, and I will continue with all of you for your progress and joy in the faith, 26 so that through my being with you again your boasting in Christ Jesus will abound on account of me.

Death is a great loss to a carnal, worldly man, for he loses all his earthly comforts and all his hopes; but to a true believer it is gain, for it is the end of all his weakness and misery. It delivers him from all the evils of life, and brings him to possess the chief good. The apostle's difficulty was not between living in this world and living in heaven; between these two there is no comparison; but between serving Christ in this world and enjoying him in another. Not between two evil things, but between two good things; living to Christ and being with him. See the power of faith and of Divine grace; it can make us willing to die. In this world we are compassed with sin; but when with Christ, we shall escape sin and temptation, sorrow and death, for ever. But those who have most reason to desire to depart, should be willing to remain in the world as long as God has any work for them to do. And the more unexpected mercies are before they come, the more of God will be seen in them.