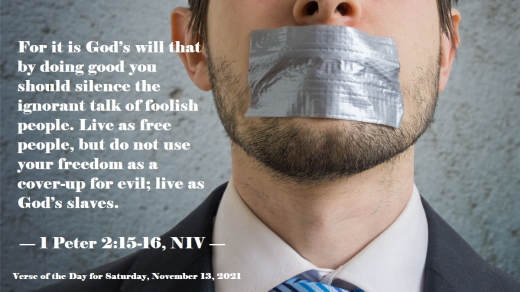 For it is God’s will that by doing good you should silence the ignorant talk of foolish people. Live as free people, but do not use your freedom as a cover-up for evil; live as God’s slaves.

Ancient Roman society criticized Christians as atheists because they rejected Roman religion and the worship of ancestral pagan gods. In a culture in which religion and the state were so enmeshed (especially given that in Rome its emperors were revered and even deified), the general populace viewed Christians as enemies of the state. Without capitulating to such societal pressures, Peter nevertheless urges the believers to be model members of society insofar as possible. They should submit to the authority of the emperor and his subordinate provincial governors, who, when fulfilling their rightful role, will punish evildoers and reward those who do what is good (Ro 13:1–7). Such godly behavior will serve to shut down the ignorant criticisms leveled against Christianity. A Christian’s submission to governing authorities is not servile or groveling, however, since Christians are not slaves to the government. Rather, they are free; therefore, they can speak and act with the dignity and confidence that free members of society bear. But Christians may not abuse their liberty (with respect to the government) to justify evil behavior. After all, even if their master is not the government, Christians do nevertheless have a master—God.

Read all of First Peter Chapter 2