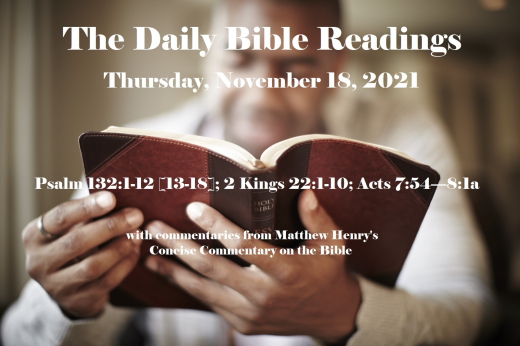 In today’s lectionary readings, our psalm reminds us that somehow, someway, God will put a descendant of David on the throne forever. David pleads that he was the anointed of the Lord, and this he pleads as a type of Christ, the great Anointed. Our reading in Second Kings begins the story of the reign of good king Josiah, whose goodness shines the brighter because it came just after so much wickedness, which he had the honor to reform, and just before so great a destruction, which yet he had not the honor to prevent. In the Book of Acts, just before Stephen is stoned to death, he looks up to heaven and sees the glory of God and Jesus standing at the right hand of God. In our verse of the day, Jesus prayed to the Father for the disciples He loved so dearly that they would be sanctified in the truth, set apart, and made holy unto Him.

Sanctify them by the truth; your word is truth.

When Jesus prayed that believers would be sanctified, he was praying that they would be set apart and made righteous by the Word of God. In one sense that has already happened: believers are made righteous the moment they place their faith in Jesus. In another sense, however, they enter the “process” of sanctification, growing in obedience and holiness.

1 Lord, remember David
and all his self-denial.

6 We heard it in Ephrathah,
we came upon it in the fields of Jaar:
7 “Let us go to his dwelling place,
let us worship at his footstool, saying,
8 ‘Arise, Lord, and come to your resting place,
you and the ark of your might.
9 May your priests be clothed with your righteousness;
may your faithful people sing for joy.’”

10 For the sake of your servant David,
do not reject your anointed one.

11 The Lord swore an oath to David,
a sure oath he will not revoke:
“One of your own descendants
I will place on your throne.
12 If your sons keep my covenant
and the statutes I teach them,
then their sons will sit
on your throne for ever and ever.”

[13 For the Lord has chosen Zion,
he has desired it for his dwelling, saying,
14 “This is my resting place for ever and ever;
here I will sit enthroned, for I have desired it.
15 I will bless her with abundant provisions;
her poor I will satisfy with food.
16 I will clothe her priests with salvation,
and her faithful people will ever sing for joy.

17 “Here I will make a horn grow for David
and set up a lamp for my anointed one.
18 I will clothe his enemies with shame,
but his head will be adorned with a radiant crown.”]

Verses 1-10: David bound himself to find a place for the Lord, for the ark, the token of God's presence. When work is to be done for the Lord, it is good to tie ourselves to a time. It is good in the morning to fix upon work for the day, with submission to Providence, for we know not what a day may bring forth. And we should first, and without delay, seek to have our own hearts made a habitation of God through the Spirit. He prays that God would take up his dwelling in the habitation he had built; that he would give grace to the ministers of the sanctuary to do their duty. David pleads that he was the anointed of the Lord, and this he pleads as a type of Christ, the great Anointed. We have no merit of our own to plead; but, for His sake, in whom there is a fullness of merit, let us find favor. And every true believer in Christ, is an anointed one, and has received from the Holy One the oil of true grace. The request is, that God would not turn away, but hear and answer their petitions for his Son's sake.

Verses 11-18: The Lord never turns from us when we plead the covenant with his anointed Prophet, Priest, and King. How vast is the love of God to man, that he should speak thus concerning his church! It is his desire to dwell with us; yet how little do we desire to dwell with him! He abode in Zion till the sins of Israel caused him to give them up to the spoilers. Forsake us not, O God, and deliver us not in like manner, sinful though we are. God's people have a special blessing on common enjoyments, and that blessing puts peculiar sweetness into them. Zion's poor have reason to be content with a little of this world, because they have better things prepared for them. God will abundantly bless the nourishment of the new man, and satisfy the poor in spirit with the bread of life. He gives more than we ask, and when he gives salvation, he will give abundant joy. God would bring to nothing every design formed to destroy the house of David, until King Messiah should arise out of it, to sit upon the throne of his Father. In him all the promises center. His enemies, who will not have him to reign over them, shall at the last day be clothed with shame and confusion for ever.

From the Historical Books
2 Kings 22:1-10
Josiah a Righteous King

22:1 Josiah was eight years old when he became king, and he reigned in Jerusalem thirty-one years. His mother’s name was Jedidah daughter of Adaiah; she was from Bozkath. 2 He did what was right in the eyes of the Lord and followed completely the ways of his father David, not turning aside to the right or to the left.

3 In the eighteenth year of his reign, King Josiah sent the secretary, Shaphan son of Azaliah, the son of Meshullam, to the temple of the Lord. He said: 4 “Go up to Hilkiah the high priest and have him get ready the money that has been brought into the temple of the Lord, which the doorkeepers have collected from the people. 5 Have them entrust it to the men appointed to supervise the work on the temple. And have these men pay the workers who repair the temple of the Lord— 6 the carpenters, the builders and the masons. Also have them purchase timber and dressed stone to repair the temple. 7 But they need not account for the money entrusted to them, because they are honest in their dealings.”

The different event of Josiah's early succession from that of Manasseh, must be ascribed to the distinguishing grace of God; yet probably the persons that trained him up were instruments in producing this difference. His character was most excellent. Had the people joined in the reformation as heartily as he persevered in it, blessed effects would have followed. But they were wicked, and had become fools in idolatry. We do not obtain full knowledge of the state of Judah from the historical records, unless we refer to the writings of the prophets who lived at the time. In repairing the temple, the book of the law was found, and brought to the king. It seems, this book of the law was lost and missing; carelessly mislaid and neglected, as some throw their Bibles into corners, or maliciously concealed by some of the idolaters. God's care of the Bible plainly shows his interest in it. Whether this was the only copy in being or not, the things contained in it were new, both to the king and to the high priest. No summaries, extracts, or collections out of the Bible, can convey and preserve the knowledge of God and his will, like the Bible itself. It was no marvel that the people were so corrupt, when the book of the law was so scarce; they that corrupted them, no doubt, used arts to get that book out of their hands. The abundance of Bibles we possess aggravates our national sins; for what greater contempt of God can we show, than to refuse to read his word when put into our hands, or, reading it, not to believe and obey it? By the holy law is the knowledge of sin, and by the blessed gospel is the knowledge of salvation. When the former is understood in its strictness and excellence, the sinner begins to inquire, What must I do to be saved? And the ministers of the gospel point out to him Jesus Christ, as the end of the law for righteousness to every one that believes.

57 At this they covered their ears and, yelling at the top of their voices, they all rushed at him, 58 dragged him out of the city and began to stone him. Meanwhile, the witnesses laid their coats at the feet of a young man named Saul.

59 While they were stoning him, Stephen prayed, “Lord Jesus, receive my spirit.” 60 Then he fell on his knees and cried out, “Lord, do not hold this sin against them.” When he had said this, he fell asleep.

8:1a And Saul approved of their killing him.

Nothing is so comfortable to dying saints, or so encouraging to suffering saints, as to see Jesus at the right hand of God: blessed be God, by faith we may see him there. Stephen offered up two short prayers in his dying moments. Our Lord Jesus is God, to whom we are to seek, and in whom we are to trust and comfort ourselves, living and dying. And if this has been our care while we live, it will be our comfort when we die. Here is a prayer for his persecutors. Though the sin was very great, yet if they would lay it to their hearts, God would not lay it to their charge. Stephen died as much in a hurry as ever any man did, yet, when he died, the words used are, he fell asleep; he applied himself to his dying work with as much composure as if he had been going to sleep. He shall awake again in the morning of the resurrection, to be received into the presence of the Lord, where is fullness of joy, and to share the pleasures that are at his right hand, for evermore.