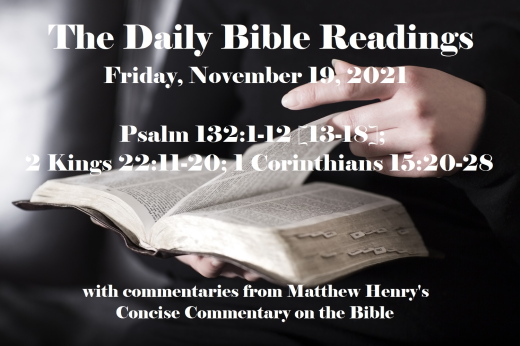 In today’s lectionary readings, our psalm reminds us that somehow, someway, God will put a descendant of David on the throne forever. David pleads that he was the anointed of the Lord, and this he pleads as a type of Christ, the great Anointed. In our reading in Second Kings, King Josiah is confronted with the Book of the Law. The hearing of God’s word did a spiritual work in King Josiah. It was not merely the transmission of information; the hearing of God’s word had an impact of spiritual power on Josiah. In our epistle reading, Paul declares once more that Christ has been raised from the dead. Further, He was but the first of all who will follow Him. Just as death came to all people through one man, Adam, resurrection will come to all in Christ when He returns for all those who belong to Him. In our verse of the day, verse one presents an image of the godly by way of negation, whereas verse two resents the same image by way of positing—that is, in a manner which is the opposite to the way of negation.

Blessed is the one who does not walk in step with the wicked or stand in the way that sinners take or sit in the company of mockers, but whose delight is in the law of the Lord, and who meditates on his law day and night.

Sinners harden their hearts incrementally: first walking, then standing, then sitting. But the righteous are happy and flourishing due to divine favor. They constantly contemplate God’s word.

1 Lord, remember David
and all his self-denial.

6 We heard it in Ephrathah,
we came upon it in the fields of Jaar:
7 “Let us go to his dwelling place,
let us worship at his footstool, saying,
8 ‘Arise, Lord, and come to your resting place,
you and the ark of your might.
9 May your priests be clothed with your righteousness;
may your faithful people sing for joy.’”

10 For the sake of your servant David,
do not reject your anointed one.

11 The Lord swore an oath to David,
a sure oath he will not revoke:
“One of your own descendants
I will place on your throne.
12 If your sons keep my covenant
and the statutes I teach them,
then their sons will sit
on your throne for ever and ever.”

[13 For the Lord has chosen Zion,
he has desired it for his dwelling, saying,
14 “This is my resting place for ever and ever;
here I will sit enthroned, for I have desired it.
15 I will bless her with abundant provisions;
her poor I will satisfy with food.
16 I will clothe her priests with salvation,
and her faithful people will ever sing for joy.

17 “Here I will make a horn grow for David
and set up a lamp for my anointed one.
18 I will clothe his enemies with shame,
but his head will be adorned with a radiant crown.”]

Verses 1-10: David bound himself to find a place for the Lord, for the ark, the token of God's presence. When work is to be done for the Lord, it is good to tie ourselves to a time. It is good in the morning to fix upon work for the day, with submission to Providence, for we know not what a day may bring forth. And we should first, and without delay, seek to have our own hearts made a habitation of God through the Spirit. He prays that God would take up his dwelling in the habitation he had built; that he would give grace to the ministers of the sanctuary to do their duty. David pleads that he was the anointed of the Lord, and this he pleads as a type of Christ, the great Anointed. We have no merit of our own to plead; but, for His sake, in whom there is a fullness of merit, let us find favor. And every true believer in Christ, is an anointed one, and has received from the Holy One the oil of true grace. The request is, that God would not turn away, but hear and answer their petitions for his Son's sake.

Verses 11-18: The Lord never turns from us when we plead the covenant with his anointed Prophet, Priest, and King. How vast is the love of God to man, that he should speak thus concerning his church! It is his desire to dwell with us; yet how little do we desire to dwell with him! He abode in Zion till the sins of Israel caused him to give them up to the spoilers. Forsake us not, O God, and deliver us not in like manner, sinful though we are. God's people have a special blessing on common enjoyments, and that blessing puts peculiar sweetness into them. Zion's poor have reason to be content with a little of this world, because they have better things prepared for them. God will abundantly bless the nourishment of the new man, and satisfy the poor in spirit with the bread of life. He gives more than we ask, and when he gives salvation, he will give abundant joy. God would bring to nothing every design formed to destroy the house of David, until King Messiah should arise out of it, to sit upon the throne of his Father. In him all the promises center. His enemies, who will not have him to reign over them, shall at the last day be clothed with shame and confusion for ever.

22:11 When the king heard the words of the Book of the Law, he tore his robes. 12 He gave these orders to Hilkiah the priest, Ahikam son of Shaphan, Akbor son of Micaiah, Shaphan the secretary and Asaiah the king’s attendant: 13 “Go and inquire of the Lord for me and for the people and for all Judah about what is written in this book that has been found. Great is the Lord’s anger that burns against us because those who have gone before us have not obeyed the words of this book; they have not acted in accordance with all that is written there concerning us.”

14 Hilkiah the priest, Ahikam, Akbor, Shaphan and Asaiah went to speak to the prophet Huldah, who was the wife of Shallum son of Tikvah, the son of Harhas, keeper of the wardrobe. She lived in Jerusalem, in the New Quarter.

15 She said to them, “This is what the Lord, the God of Israel, says: Tell the man who sent you to me, 16 ‘This is what the Lord says: I am going to bring disaster on this place and its people, according to everything written in the book the king of Judah has read. 17 Because they have forsaken me and burned incense to other gods and aroused my anger by all the idols their hands have made, my anger will burn against this place and will not be quenched.’ 18 Tell the king of Judah, who sent you to inquire of the Lord, ‘This is what the Lord, the God of Israel, says concerning the words you heard: 19 Because your heart was responsive and you humbled yourself before the Lord when you heard what I have spoken against this place and its people—that they would become a curse and be laid waste—and because you tore your robes and wept in my presence, I also have heard you, declares the Lord. 20 Therefore I will gather you to your ancestors, and you will be buried in peace. Your eyes will not see all the disaster I am going to bring on this place.’”

So they took her answer back to the king.

The book of the law is read before the king. Those best honor their Bibles, who study them; daily feed on that bread, and walk by that light. Convictions of sin and wrath should put us upon this inquiry, What shall we do to be saved? Also, what we may expect, and must provide for. Those who are truly apprehensive of the weight of God's wrath, cannot but be very anxious how they may be saved. Huldah let Josiah know what judgments God had in store for Judah and Jerusalem. The generality of the people were hardened, and their hearts unhumbled, but Josiah's heart was tender. This is tenderness of heart, and thus he humbled himself before the Lord. Those who most fear God's wrath, are least likely to feel it. Though Josiah was mortally wounded in battle, yet he died in peace with God, and went to glory. Whatever such persons suffer or witness, they are gathered to the grave in peace, and shall enter into the rest which remains for the people of God.

15:20 But Christ has indeed been raised from the dead, the firstfruits of those who have fallen asleep. 21 For since death came through a man, the resurrection of the dead comes also through a man. 22 For as in Adam all die, so in Christ all will be made alive. 23 But each in turn: Christ, the firstfruits; then, when he comes, those who belong to him. 24 Then the end will come, when he hands over the kingdom to God the Father after he has destroyed all dominion, authority and power. 25 For he must reign until he has put all his enemies under his feet. 26 The last enemy to be destroyed is death. 27 For he “has put everything under his feet.” Now when it says that “everything” has been put under him, it is clear that this does not include God himself, who put everything under Christ. 28 When he has done this, then the Son himself will be made subject to him who put everything under him, so that God may be all in all.

All that are by faith united to Christ, are by his resurrection assured of their own. As through the sin of the first Adam, all men became mortal, because all had from him the same sinful nature, so, through the resurrection of Christ, shall all who are made to partake of the Spirit, and the spiritual nature, revive, and live for ever. There will be an order in the resurrection. Christ himself has been the first-fruits; at his coming, his redeemed people will be raised before others; at the last the wicked will rise also. Then will be the end of this present state of things. Would we triumph in that solemn and important season, we must now submit to his rule, accept his salvation, and live to his glory. Then shall we rejoice in the completion of his undertaking, that God may receive the whole glory of our salvation, that we may for ever serve him, and enjoy his favor.