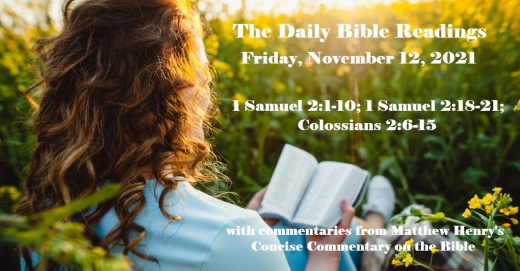 In today’s lectionary readings, we read Hannah’s Prayer. Hannah’s Prayer is a psalm, but like the psalms, it is a prayer addressed to God, a prayer of praise and thanksgiving. This psalm records the worship Hannah offered on the very day she left her little boy—her only child—at the tabernacle, never for him to live in her home again. We read in First Samuel, though Hannah gave Samuel to the LORD, she never stopped loving him. Each year Hannah made him a little robe and took it to him when she went up with her husband to offer the annual sacrifice. Samuel’s purity and service to the Lord contrast the evil character of Eli’s sons, though. In our epistle reading, we read that Christ is the head of every ruler and authority. In our verse of the day, Paul petitions God on behalf of the Colossians. He prayed that they would know God’s will, informed by a true spiritual understanding. To know God and what He requires of us is our first responsibility.

Today’s Verse of the Day:
Colossians 1:9

For this reason, since the day we heard about you, we have not stopped praying for you. We continually ask God to fill you with the knowledge of his will through all the wisdom and understanding that the Spirit gives,

It is God’s desire that we would walk in His will and obey Him. And knowing His plan for our lives is a treasure because it prevents us from wasting our time and talents on things that will not matter in eternity. So when we pray for others, it is appropriate that we ask for His purpose to be fulfilled in them and that they would see every situation from His viewpoint—because this is life at its very best, and there’s absolutely nothing that compares with it.

1 Then Hannah prayed and said:

“My heart rejoices in the Lord;
in the Lord my horn is lifted high.
My mouth boasts over my enemies,
for I delight in your deliverance.

3 “Do not keep talking so proudly
or let your mouth speak such arrogance,
for the Lord is a God who knows,
and by him deeds are weighed.

4 “The bows of the warriors are broken,
but those who stumbled are armed with strength.
5 Those who were full hire themselves out for food,
but those who were hungry are hungry no more.
She who was barren has borne seven children,
but she who has had many sons pines away.

6 “The Lord brings death and makes alive;
he brings down to the grave and raises up.
7 The Lord sends poverty and wealth;
he humbles and he exalts.
8 He raises the poor from the dust
and lifts the needy from the ash heap;
he seats them with princes
and has them inherit a throne of honor.

“For the foundations of the earth are the Lord’s;
on them he has set the world.
9 He will guard the feet of his faithful servants,
but the wicked will be silenced in the place of darkness.

“It is not by strength that one prevails;
10    those who oppose the Lord will be broken.
The Most High will thunder from heaven;
the Lord will judge the ends of the earth.

“He will give strength to his king
and exalt the horn of his anointed.”

Hannah's heart rejoiced, not in Samuel, but in the Lord. She looks beyond the gift, and praises the Giver. She rejoiced in the salvation of the Lord, and in expectation of His coming, who is the whole salvation of his people. The strong are soon weakened, and the weak are soon strengthened, when God pleases. Are we poor? God made us poor, which is a good reason why we should be content, and make up our minds to our condition. Are we rich? God made us rich, which is a good reason why we should be thankful, and serve him cheerfully, and do good with the abundance he gives us. He respects not man's wisdom or fancied excellencies, but chooses those whom the world accounts foolish, teaching them to feel their guilt, and to value his free and precious salvation. This prophecy looks to the kingdom of Christ, that kingdom of grace, of which Hannah speaks, after having spoken largely of the kingdom of providence. And here is the first time that we meet with the name MESSIAH, or his Anointed. The subjects of Christ's kingdom will be safe, and the enemies of it will be ruined; for the Anointed, the Lord Christ, is able to save, and to destroy.

2:18 But Samuel was ministering before the Lord—a boy wearing a linen ephod. 19 Each year his mother made him a little robe and took it to him when she went up with her husband to offer the annual sacrifice. 20 Eli would bless Elkanah and his wife, saying, “May the Lord give you children by this woman to take the place of the one she prayed for and gave to the Lord.” Then they would go home. 21 And the Lord was gracious to Hannah; she gave birth to three sons and two daughters. Meanwhile, the boy Samuel grew up in the presence of the Lord.

Samuel, being devoted to the Lord in a special manner, was from a child employed about the sanctuary in the services he was capable of. As he did this with a pious disposition of mind, it was called ministering unto the Lord. He received a blessing from the Lord. Those young people who serve God as well as they can, he will enable to improve, that they may serve him better.

From the Epistles
Colossians 2:6-15
Christ the Head of Every Ruler and Authority

2:6 So then, just as you received Christ Jesus as Lord, continue to live your lives in him, 7 rooted and built up in him, strengthened in the faith as you were taught, and overflowing with thankfulness.

8 See to it that no one takes you captive through hollow and deceptive philosophy, which depends on human tradition and the elemental spiritual forces of this world rather than on Christ.

9 For in Christ all the fullness of the Deity lives in bodily form, 10 and in Christ you have been brought to fullness. He is the head over every power and authority. 11 In him you were also circumcised with a circumcision not performed by human hands. Your whole self ruled by the flesh was put off when you were circumcised by Christ, 12 having been buried with him in baptism, in which you were also raised with him through your faith in the working of God, who raised him from the dead.

13 When you were dead in your sins and in the uncircumcision of your flesh, God made you alive with Christ. He forgave us all our sins, 14 having canceled the charge of our legal indebtedness, which stood against us and condemned us; he has taken it away, nailing it to the cross. 15 And having disarmed the powers and authorities, he made a public spectacle of them, triumphing over them by the cross.

Verses 6-7: All Christians have, in profession at least, received Jesus Christ the Lord, consented to him, and taken him for theirs. We cannot be built up in Christ, or grow in him, unless we are first rooted in him, or founded upon him. Being established in the faith, we must abound therein, and improve in it more and more. God justly withdraws this benefit from those who do not receive it with thanksgiving; and gratitude for his mercies is justly required by God.

Verses 8-15: There is a philosophy which rightly exercises our reasonable faculties; a study of the works of God, which leads us to the knowledge of God, and confirms our faith in him. But there is a philosophy which is vain and deceitful; and while it pleases men's fancies, hinders their faith: such are curious speculations about things above us, or no concern to us. Those who walk in the way of the world, are turned from following Christ. We have in Him the substance of all the shadows of the ceremonial law. All the defects of it are made up in the gospel of Christ, by his complete sacrifice for sin, and by the revelation of the will of God. To be complete, is to be furnished with all things necessary for salvation. By this one word "complete," is shown that we have in Christ whatever is required. "In him," not when we look to Christ, as though he were distant from us, but we are in him, when, by the power of the Spirit, we have faith wrought in our hearts by the Spirit, and we are united to our Head. The circumcision of the heart, the crucifixion of the flesh, the death and burial to sin and to the world, and the resurrection to newness of life, set forth in baptism, and by faith wrought in our hearts, prove that our sins are forgiven, and that we are fully delivered from the curse of the law. Through Christ, we, who were dead in sins, are quickened. Christ's death was the death of our sins; Christ's resurrection is the quickening of our souls.