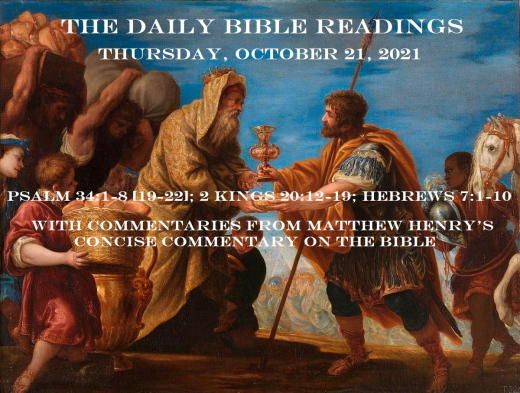 In today’s lectionary readings, David praises God in our psalm reading for deliverance from a life-threatening situation–perhaps his encounter with King Achish of Gath, later remembered as Abimelech.  David begins his testimony by stating his intent: to worship the Lord at all times. This praise, however, is not passive; it is an intentional commitment to praise the name of the Lord in an ongoing manner. This praise is to be continuous. It is to happen at all times. The author then invites, even commands others to listen, particularly those who are weak. In our historical readings in the Second Book of Kings, Hezekiah receives the Babylonian envoys. Ostensibly it was to congratulate Hezekiah on his recovery from illness, but there was surely more political motivation behind it. Indeed, this was likely part of an attempt to forge an alliance with Hezekiah against their common foe, Assyria. Hezekiah was more than willing to show off his wealth—possibly to prove that he had enough to help finance a joint rebellion—and did so with a certain amount of pride. Isaiah, however, warns that all of that wealth would eventually be taken by the Babylonians when they were no longer friends. In our epistle reading, Melchizedec met Abraham when returning from the rescue of Lot. His name, “King of Righteousness,” doubtless suitable to his character, marked him as a type of the Messiah and his kingdom. The High Priest who should afterward appear, of whom Melchizedec was a type, must be much superior to the Levitical priests. When David penned the words of our verse of the day, they were in every respect a song of thankful worship to the Father that pointed to the coming Messiah, Who would be sent from heaven to become our sacrifice for sin. It spoke of the eternal Son of God, Who humbled Himself to become a servant.

I desire to do your will, my God; your law is within my heart.

God isn’t seeking men and women who will obey Him grudgingly, reluctantly, or resentfully. He desires children who will delight to obey Him, who take pleasure in living out His commands because it pleases Him.

1 I will extol the Lord at all times;
his praise will always be on my lips.
2 I will glory in the Lord;
let the afflicted hear and rejoice.
3 Glorify the Lord with me;
let us exalt his name together.

4 I sought the Lord, and he answered me;
he delivered me from all my fears.
5 Those who look to him are radiant;
their faces are never covered with shame.
6 This poor man called, and the Lord heard him;
he saved him out of all his troubles.
7 The angel of the Lord encamps around those who fear him,
and he delivers them.

8 Taste and see that the Lord is good;
blessed is the one who takes refuge in him.

[19 The righteous person may have many troubles,
but the Lord delivers him from them all;
20 he protects all his bones,
not one of them will be broken.

Verses 1-8: If we hope to spend eternity in praising God, it is fit that we should spend much of our time here in this work. He never said to any one, Seek ye me in vain. David's prayers helped to silence his fears; many besides him have looked unto the Lord by faith and prayer, and it has wonderfully revived and comforted them. When we look to the world, we are perplexed, and at a loss. But on looking to Christ depends our whole salvation, and all things needful thereunto do so also. This poor man, whom no man looked upon with any respect, or looked after with any concern, was yet welcome to the throne of grace; the Lord heard him, and saved him out of all his troubles. The holy angels minister to the saints, and stand for them against the powers of darkness. All the glory be to the Lord of the angels. By taste and sight we both make discoveries, and have enjoyment; Taste and see God's goodness; take notice of it, and take the comfort of it. He makes all truly blessed that trust in him. As to the things of the other world, they shall have grace sufficient for the support of spiritual life. And as to this life, they shall have what is necessary from the hand of God. Paul had all, and abounded, because he was content, Philippians 4:11-18. Those who trust to themselves, and think their own efforts sufficient for them, shall want; but they shall be fed who trust in the Lord. Those shall not want, who with quietness work, and mind their own business.

Verses 19-22: The righteous are taken under the special protection of the Lord, yet they have their share of crosses in this world, and there are those that hate them. Both from the mercy of Heaven, and the malice of hell, the afflictions of the righteous must be many. But whatever troubles befell them, shall not hurt their souls, for God keeps them from sinning in troubles. No man is desolate, but he whom God has forsaken.

From the Historical Books
2 Kings 20:12-19
God’s Word Comes to Hezekiah

20:12 At that time Marduk-Baladan son of Baladan king of Babylon sent Hezekiah letters and a gift, because he had heard of Hezekiah’s illness. 13 Hezekiah received the envoys and showed them all that was in his storehouses—the silver, the gold, the spices and the fine olive oil—his armory and everything found among his treasures. There was nothing in his palace or in all his kingdom that Hezekiah did not show them.

14 Then Isaiah the prophet went to King Hezekiah and asked, “What did those men say, and where did they come from?”

“From a distant land,” Hezekiah replied. “They came from Babylon.”

15 The prophet asked, “What did they see in your palace?”

“They saw everything in my palace,” Hezekiah said. “There is nothing among my treasures that I did not show them.”

16 Then Isaiah said to Hezekiah, “Hear the word of the Lord: 17 The time will surely come when everything in your palace, and all that your predecessors have stored up until this day, will be carried off to Babylon. Nothing will be left, says the Lord. 18 And some of your descendants, your own flesh and blood who will be born to you, will be taken away, and they will become eunuchs in the palace of the king of Babylon.”

19 “The word of the Lord you have spoken is good,” Hezekiah replied. For he thought, “Will there not be peace and security in my lifetime?”

The king of Babylon was at this time independent of the king of Assyria, though shortly after subdued by him. Hezekiah showed his treasures and armor, and other proofs of his wealth and power. This was the effect of pride and ostentation, and departing from simple reliance on God. He also seems to have missed the opportunity of speaking to the Chaldeans, about Him who had wrought the miracles which excited their attention, and of pointing out to them the absurdity and evil of idolatry. What is more common than to show our friends our houses and possessions? But if we do this in the pride of ours hearts, to gain applause from men, not giving praise to God, it becomes sin in us, as it did in Hezekiah. We may expect vexation from every object with which we are unduly pleased. Isaiah, who had often been Hezekiah's comforter, is now is reprover. The blessed Spirit is both, John 16:7; John 16:8. Ministers must be both, as there is occasion. Hezekiah allowed the justice of the sentence, and God's goodness in the respite. Yet the prospect respecting his family and nation must have given him many painful feelings. Hezekiah was indeed humbled for the pride of his heart. And blessed are the dead who die in the Lord; for they rest from their labors, and their works do follow them.

From the Epistles
Hebrews 7:1-10
The Priestly Order of Melchizedek

7:1 This Melchizedek was king of Salem and priest of God Most High. He met Abraham returning from the defeat of the kings and blessed him, 2 and Abraham gave him a tenth of everything. First, the name Melchizedek means “king of righteousness”; then also, “king of Salem” means “king of peace.” 3 Without father or mother, without genealogy, without beginning of days or end of life, resembling the Son of God, he remains a priest forever.

4 Just think how great he was: Even the patriarch Abraham gave him a tenth of the plunder! 5 Now the law requires the descendants of Levi who become priests to collect a tenth from the people—that is, from their fellow Israelites—even though they also are descended from Abraham. 6 This man, however, did not trace his descent from Levi, yet he collected a tenth from Abraham and blessed him who had the promises. 7 And without doubt the lesser is blessed by the greater. 8 In the one case, the tenth is collected by people who die; but in the other case, by him who is declared to be living. 9 One might even say that Levi, who collects the tenth, paid the tenth through Abraham, 10 because when Melchizedek met Abraham, Levi was still in the body of his ancestor.

Verses 1-3: Melchizedec met Abraham when returning from the rescue of Lot. His name, "King of Righteousness," doubtless suitable to his character, marked him as a type of the Messiah and his kingdom. The name of his city signified "Peace;" and as king of peace he typified Christ, the Prince of Peace, the great Reconciler of God and man. Nothing is recorded as to the beginning or end of his life; thus he typically resembled the Son of God, whose existence is from everlasting to everlasting, who had no one that was before him, and will have no one come after him, in his priesthood. Every part of Scripture honors the great King of Righteousness and Peace, our glorious High Priest and Savior; and the more we examine it, the more we shall be convinced, that the testimony of Jesus is the spirit of prophecy.

Verses 4-10: That High Priest who should afterward appear, of whom Melchizedec was a type, must be much superior to the Levitical priests. Observe Abraham's great dignity and happiness; that he had the promises. That man is rich and happy indeed, who has the promises, both of the life that now is, and of that which is to come. This honor have all those who receive the Lord Jesus. Let us go forth in our spiritual conflicts, trusting in his word and strength, ascribing our victories to his grace, and desiring to be met and blessed by him in all our ways.

Optional parts of the readings are set off in [square brackets].