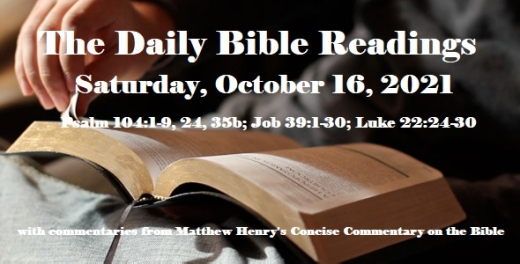 The Daily Bible Readings
Saturday, October 16, 2021
Psalm 104:1-9, 24, 35b; Job 39:1-30; Luke 22:24-30
with commentaries from Matthew Henry's Concise Commentary on the Bible
Introduction
Our psalm is a majestic hymn of praise that extols Yahweh as creator and sustainer of the natural world in today’s lectionary readings. As the psalmist views God’s creative work, it is even a more striking record than that of Genesis in some respects. In our reading in Job, God kept bringing the level of knowledge down for Job. He could, quite conceivably, know such facts of nature from simple observation. Yet even this relatively low level of knowledge was beyond Job. The world regards the one who is served as greater, but Jesus in our gospel reading showed us that true greatness is in serving more than in being served. In our verse of the day, David closes this glorious psalm with a humble surrender of his mouth and heart to God. He knew that real godliness was not only a matter of what a man did but also of what he said and thought in his heart.

May these words of my mouth and this meditation of my heart be pleasing in your sight, Lord, my Rock and my Redeemer.

There is absolutely nothing wrong with asking the Lord to make you pleasing to Him; in fact, He loves to teach you His ways. He tenderly molds your character so that you speak, think, and act in a way that honors Him.

Lord my God, you are very great;
you are clothed with splendor and majesty.

2 The Lord wraps himself in light as with a garment;
he stretches out the heavens like a tent
3    and lays the beams of his upper chambers on their waters.
He makes the clouds his chariot
and rides on the wings of the wind.
4 He makes winds his messengers,
flames of fire his servants.

5 He set the earth on its foundations;
it can never be moved.
6 You covered it with the watery depths as with a garment;
the waters stood above the mountains.
7 But at your rebuke the waters fled,
at the sound of your thunder they took to flight;
8 they flowed over the mountains,
they went down into the valleys,
to the place you assigned for them.
9 You set a boundary they cannot cross;
never again will they cover the earth.

24 How many are your works, Lord!
In wisdom you made them all;
the earth is full of your creatures.

Commentary
Every object we behold calls on us to bless and praise the Lord, who is great. His eternal power and Godhead are clearly shown by the things which he hath made. God is light, and in him is no darkness at all. The Lord Jesus, the Son of his love, is the Light of the world.

From the Books of Wisdom
Job 39:1-30
God Confronts Job
1 “Do you know when the mountain goats give birth?
Do you watch when the doe bears her fawn?
2 Do you count the months till they bear?
Do you know the time they give birth?
3 They crouch down and bring forth their young;
their labor pains are ended.
4 Their young thrive and grow strong in the wilds;
they leave and do not return.

5 “Who let the wild donkey go free?
Who untied its ropes?
6 I gave it the wasteland as its home,
the salt flats as its habitat.
7 It laughs at the commotion in the town;
it does not hear a driver’s shout.
8 It ranges the hills for its pasture
and searches for any green thing.

9 “Will the wild ox consent to serve you?
Will it stay by your manger at night?
10 Can you hold it to the furrow with a harness?
Will it till the valleys behind you?
11 Will you rely on it for its great strength?
Will you leave your heavy work to it?
12 Can you trust it to haul in your grain
and bring it to your threshing floor?

13 “The wings of the ostrich flap joyfully,
though they cannot compare
with the wings and feathers of the stork.
14 She lays her eggs on the ground
and lets them warm in the sand,
15 unmindful that a foot may crush them,
that some wild animal may trample them.
16 She treats her young harshly, as if they were not hers;
she cares not that her labor was in vain,
17 for God did not endow her with wisdom
or give her a share of good sense.
18 Yet when she spreads her feathers to run,
she laughs at horse and rider.

19 “Do you give the horse its strength
or clothe its neck with a flowing mane?
20 Do you make it leap like a locust,
striking terror with its proud snorting?
21 It paws fiercely, rejoicing in its strength,
and charges into the fray.
22 It laughs at fear, afraid of nothing;
it does not shy away from the sword.
23 The quiver rattles against its side,
along with the flashing spear and lance.
24 In frenzied excitement it eats up the ground;
it cannot stand still when the trumpet sounds.
25 At the blast of the trumpet it snorts, ‘Aha!’
It catches the scent of battle from afar,
the shout of commanders and the battle cry.

26 “Does the hawk take flight by your wisdom
and spread its wings toward the south?
27 Does the eagle soar at your command
and build its nest on high?
28 It dwells on a cliff and stays there at night;
a rocky crag is its stronghold.
29 From there it looks for food;
its eyes detect it from afar.
30 Its young ones feast on blood,
and where the slain are, there it is.”

In these questions the Lord continued to humble Job. In this chapter several animals are spoken of, whose nature or situation particularly show the power, wisdom, and manifold works of God. The wild ass. It is better to labor and be good for something, than to ramble and be good for nothing. From the untameableness of this and other creatures, we may see, how unfit we are to give law to Providence, who cannot give law even to a wild ass's colt. The unicorn, a strong, stately, proud creature. He is able to serve, but not willing; and God challenges Job to force him to it. It is a great mercy if, where God gives strength for service, he gives a heart; it is what we should pray for, and reason ourselves into, which the brutes cannot do. Those gifts are not always the most valuable that make the finest show. Who would not rather have the voice of the nightingale, than the tail of the peacock; the eye of the eagle and her soaring wing, and the natural affection of the stork, than the beautiful feathers of the ostrich, which can never rise above the earth, and is without natural affection? The description of the war-horse helps to explain the character of presumptuous sinners. Every one turneth to his course, as the horse rushes into the battle. When a man's heart is fully set in him to do evil, and he is carried on in a wicked way, by the violence of his appetites and passions, there is no making him fear the wrath of God, and the fatal consequences of sin. Secure sinners think themselves as safe in their sins as the eagle in her nest on high, in the clefts of the rocks; but I will bring thee down from thence, saith the Lord, Jeremiah 49:16. All these beautiful references to the works of nature, should teach us a right view of the riches of the wisdom of Him who made and sustains all things. The want of right views concerning the wisdom of God, which is ever present in all things, led Job to think and speak unworthily of Providence.

From the Gospels
Luke 22:24-30
The Greatness of One Who Serves
22:24 A dispute also arose among them as to which of them was considered to be greatest. 25 Jesus said to them, “The kings of the Gentiles lord it over them; and those who exercise authority over them call themselves Benefactors. 26 But you are not to be like that. Instead, the greatest among you should be like the youngest, and the one who rules like the one who serves. 27 For who is greater, the one who is at the table or the one who serves? Is it not the one who is at the table? But I am among you as one who serves. 28 You are those who have stood by me in my trials. 29 And I confer on you a kingdom, just as my Father conferred one on me, 30 so that you may eat and drink at my table in my kingdom and sit on thrones, judging the twelve tribes of Israel.

Commentary
How unbecoming is the worldly ambition of being the greatest, to the character of a follower of Jesus, who took upon him the form of a servant, and humbled himself to the death of the cross! In the way to eternal happiness, we must expect to be assaulted and sifted by Satan. If he cannot destroy, he will try to disgrace or distress us. Nothing more certainly forebodes a fall, in a professed follower of Christ, than self-confidence, with disregard to warnings, and contempt of danger. Unless we watch and pray always, we may be drawn in the course of the day into those sins which we were in the morning most resolved against. If believers were left to themselves, they would fall; but they are kept by the power of God, and the prayer of Christ. Our Lord gave notice of a very great change of circumstances now approaching. The disciples must not expect that their friends would be kind to them as they had been. Therefore, he that has a purse, let him take it, for he may need it. They must now expect that their enemies would be more fierce than they had been, and they would need weapons. At the time the apostles understood Christ to mean real weapons, but he spake only of the weapons of the spiritual warfare. The sword of the Spirit is the sword with which the disciples of Christ must furnish themselves.